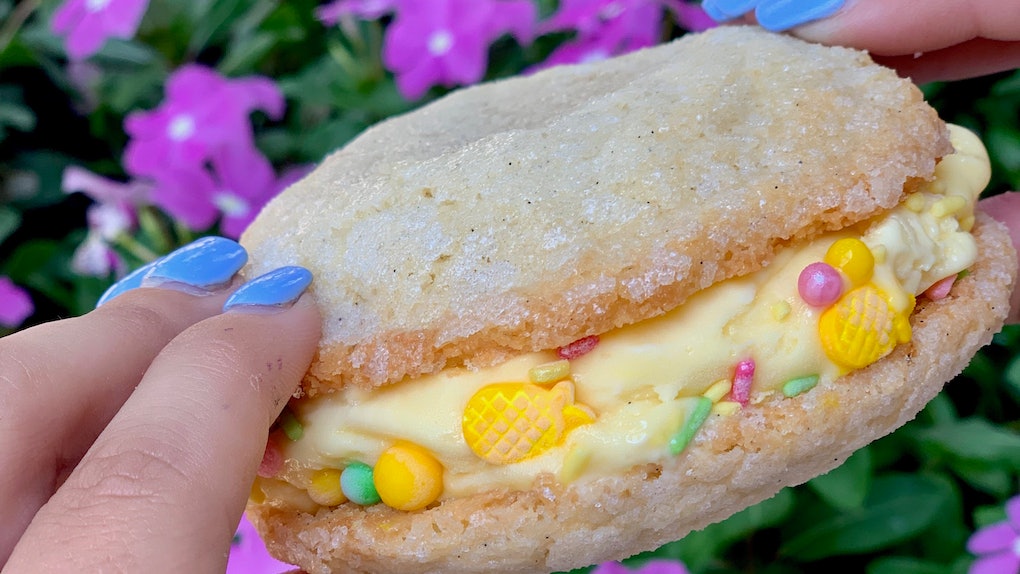 Your favorite Disney theme park treat is getting a very magical (and boozy) update just in time for summer. Dole Whip devotees, rejoice, because Mickey Mouse and Co. have dreamed up an ice cream sandwich that's filled with a frozen blend of Moscato, vodka, and yes, pineapple Dole Whip. Here's where to get Disney's Frozcato Sugar Cookie Sandwich, because you definitely need, not want, this boozy deliciousness in your life ASAP.

Starting on Friday, June 7, the Magic Kingdom is helping its visitors get ready for the weekend with some patio season-ready bites, courtesy of the park's new Frozcato Sugar Cookie Sandwich, according to press materials. Wine Bar George, which is located in Disney Springs at Disney World in Orlando, Florida, will be serving a version of its famed Pineapple Dole Whip, Moscato, and vodka cocktail — but in ice cream cookie form — and TBH, it sounds even better than the original drink.

According to blogger Disney Food Blog, the counter service portion of Wine Bar George (which is called The Basket) will be dishing up the confections, which feature two sugar cookies sandwiching a sorbet-inspired blend of pineapple Dole Whip, sweet Moscato wine, and vodka. Per an image of the treat, it also looks like it's decorated with colorful sprinkles and candies, making it perfect for the 'Gram. The best part? It's just $8 per sandwich, which is honestly a steal for getting a buzz while handling your sugar cookie and Dole Whip cravings in one tasty treat.

According to a Disney rep, the Frozcato Sugar Cookie Sandwich will be available all summer long, meaning you can plan to cool off with the treat and beat the hot Florida sun while waiting in lines and walking around the park. Just one word of caution: This pineapple, Moscato, and vodka-infused dessert will reportedly only be made in limited quantities daily, so I'd make sure to plan a stop at Wine Bar George earlier in the day, and start your wine o'clock before the crowds get in. After all, adulting isn't a thing in a Disney park, so you're free to begin whenever you decide you want to.

Speaking of boozy Dole Whip creations, you'll want to check out the new King's Cooler at Animal Kingdom later in the day if you're trying to keep that buzz going to make your day in the park a (responsibly) lit one.

The drink, which debuted at the Magic Kingdom on May 24, is for rum drinkers and mixes Pineapple Dole Whip with the spirit. According to Disney Food Blog, it's then "topped with red syrup made up of watermelon and coconut," so it sounds like you're definitely getting a more tropical flavor with this cocktail.

Whether you choose to spend your day at the park biting into a Frozcato Sugar Cookie Sandwich or channeling your inner Lion King (or Queen) with the boozy King's Cooler, there's never been so many grown-up ways to enjoy your Pineapple Dole Whip fix this summer.

Adulting may be hard, but luckily that doesn't have to be a reality once you walk through the gates of the Magic Kingdom. Cheers to making your next Disney visit the most magical one yet.