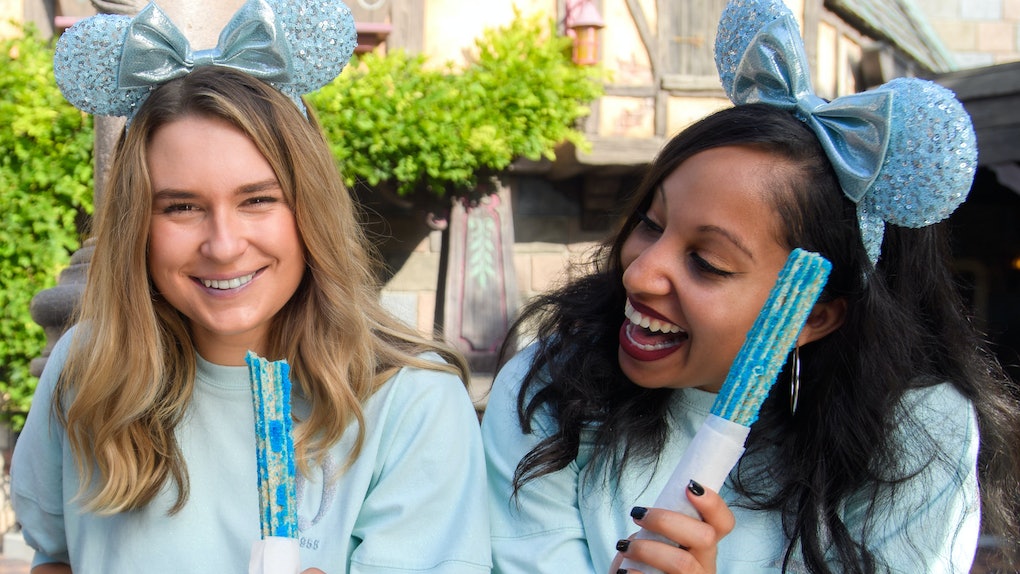 Almost every Disney fan and Frozen enthusiast out there is dying in anticipation of Frozen 2, which is set to hit the big screen on Nov. 22, 2019. And while November may seem light years away, Disney Parks is already planning to release its latest color collection for the movie almost two months beforehand. The line is going to include themed merchandise, food, and drinks. So, you should really start perusing Disney's Arendelle Aqua color collection for Frozen — you definitely won't want to let any of it go.

To be completely honest, Disney's Arendelle Aqua Collection sounds like everything I need in life. (If you're not familiar, Arendelle is the kingdom ruled by Queen Elsa in the film.) According to the brand, it's going to feature a wide range of adorable food, themed beverages, and — of course — all of the Frozen-inspired merchandise you could imagine. It will officially become available as of Sept. 13. When it launches, you can snag it at Disneyland Resort, Walt Disney World Resort, Disneyland Paris, Hong Kong Disneyland, Shanghai Disney Resort, and online at shopDisney.com. The merch will also expand to Disney Stores nationwide in October 2019. Needless to say, I'm going to try to get my fix as soon as I possibly can. With light blue hues and sparkles everywhere, this might be the prettiest collection yet. Check out a few of my favorites, below.

The collection's Frozen Arendelle Aqua Lemonade is the icy blue drink of my dreams. According to Disney, it features frozen lemonade, passionfruit, and pineapple, making for a shockingly tropical treat. You'll be able to find it at Disney Springs at Disney World in Orlando, Florida when the collection launches next week.

The Arendelle Aqua Pearl Cupcake is an elegant bite, featuring a chocolate cupcake with a blue cotton candy marshmallow cream center, according to the brand. It's topped with cotton candy buttercream, milk chocolate ears, crispy pearls, sanding sugar, and glitter for an extra bit of magic. It will be available at Everything Pop, located in Disney’s Pop Century Resort at Walt Disney World.

The Sugar Drop Donut features not one — but two — cake donuts, which are slathered in blue fondant glaze and winter sugar crystal mix, according to Disney. You will be able to find them at All Star Music, in Disney’s All Star Resort in Orlando, Florida.

I — personally — am mostly anticipating the Arendelle Aqua Churros. According to Disney, they are sprinkled in aqua-colored sugar, and they will be available for purchase at the HUB popcorn cart at Disneyland in Anaheim, California.

For those who enjoy taking their daily cuppa on the go, I strongly suggest getting yourself an Arendelle Aqua Tumbler. They're ombre sparkly blue, and will be available at Walt Disney World, Disneyland Resort, Hong Kong Disneyland Resort, and on ShopDisney.com.

Travel in style with Disney's Arendelle Aqua Mini Backpack by Loungefly. It's blue, sparkly, and — of course — it features a light blue bow. Per the brand, you'll be able to find them at Walt Disney World, Disneyland Resort, Disneyland Paris, Hong Kong Disneyland Resort, Shanghai Disney Resort, and on ShopDisney.com.

Last but not least, we have the Arendelle Aqua Minnie Mouse Ear Headband. It's totally decked out in aqua blue sequins with a signature Minnie bow, and according to the brand, you will be able to purchase them at Walt Disney World, Disneyland Resort, Disneyland Paris, Hong Kong Disneyland Resort, Shanghai Disney Resort. But if you'd rather shop online, get yours at ShopDisney.com.

If all you really want in life is to build a dang snowman, I strongly suggest splurging on Disney's Arendelle Aqua collection. While the pricing isn't available at the moment, you're sure to find a blue-hued treat to fit your budget. The food and drink items will be available from Sept. 13 through Oct. 31, so you'll have some time to work your way to the aqua treats.

IDK what it is, guys, but for the first time in forever, I feel like this might be a purchase that won't leave me with a feeling of buyer's remorse.