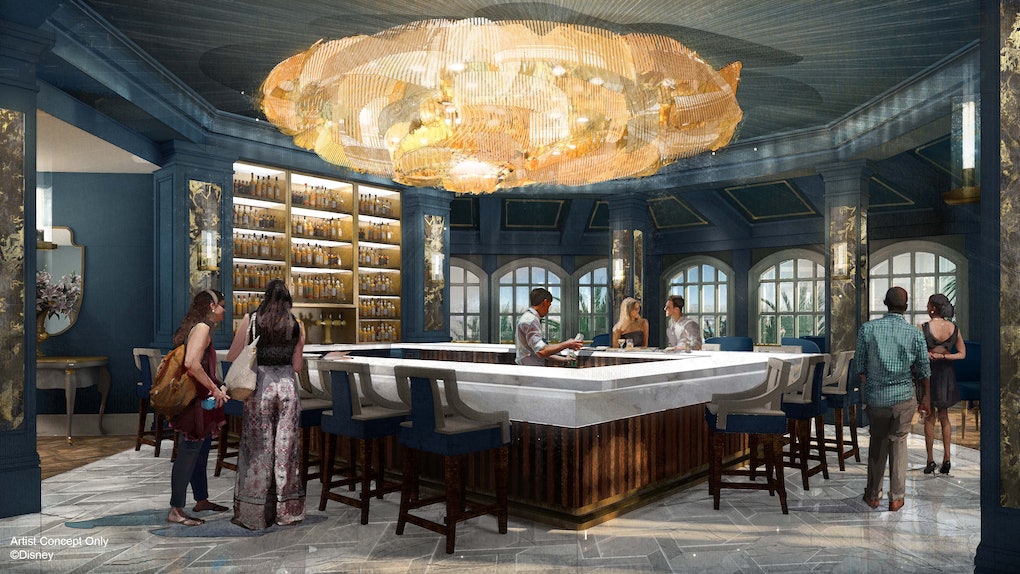 Disney World is about to get even better for anyone who's old enough to sip on a cocktail during their magical vacay. Why is that, you ask? Well, it's because Disney World's Beauty and the Beast-inspired bar is in the works. That's right: When you visit Disney’s Grand Floridian Resort & Spa in fall 2019, you'll get to "be their guest" at the bar and enjoy a cocktail underneath a glistening gold chandelier. The Beauty and the Beast-inspired bar isn't the only touch of magic that Disney World has up its sleeve, though. In fact, it's only one part of an entire lounge that'll honor the live-action film later this year.

I'll start with the bar, though (because that'll be my favorite part). Based on a post published by the Disney Parks Blog on Friday, April 12, it sounds like the upcoming Beauty and the Beast-inspired bar will be charming AF. As I previously mentioned, the room itself will feature a gigantic gold chandelier that'll hang above the bar. It's not your typical chandelier, though. According to the Disney Parks Blog, this one will be inspired by the Beast's rose and Belle's golden dress. One artist concept photo that was provided in the blog post shows the chandelier, and you can see its warm golden hue and layered design that's reminiscent of rose petals.

The artist concept photo (below) also shows a seemingly marble bar top and a booze shelf that's giving me total "library" vibes. However, those decorative details haven't been confirmed yet. Elite Daily reached out to Disney for more information on the bar, but did not hear back by the time of publication.

Either way, the chandelier has been confirmed, and I can't wait to sip on a cocktail underneath it. If you're also excited to visit the up-and-coming Beauty and the Beast-inspired bar, plan your Disney World vacay for fall 2019 and book your stay at Disney’s Grand Floridian Resort & Spa. According to the Disney Parks Blog, that's when (and where) the bar will be open.

Apparently, the outdoor patio will be inspired by the Beast's garden terrace, while the garden room will be reminiscent of his "enchanted forrest." The library, on the other hand, will give you all sorts of Beauty and the Beast vibes. Not only will it feature French furnishings and baroque designs, but it'll also nod to the Beast's friends.

I don't know about you, but I'm feeling nostalgic just thinking about it. Beauty and the Beast was one of my favorite Disney movies growing up, and I can't wait to celebrate the classic film with a drink at hand.

For more information on the upcoming bar and lounge, keep your eyes on the Disney Parks Blog. When more details are announced, you'll be one step closer to booking your dream vacation.

More like this
What Is Taco Bell's Times Square Digital Cantina? It's A Unique Experience
By Lara Walsh
Smirnoff's Summer Of 2,021 Dreams Giveaway Includes Free Flights & Bucket List Experiences
By Lara Walsh
8 Disney-Themed Charcuterie Board Ideas To Add Some Pixie Dust To Your Movie Night
By Rachel Chapman
Stay up to date