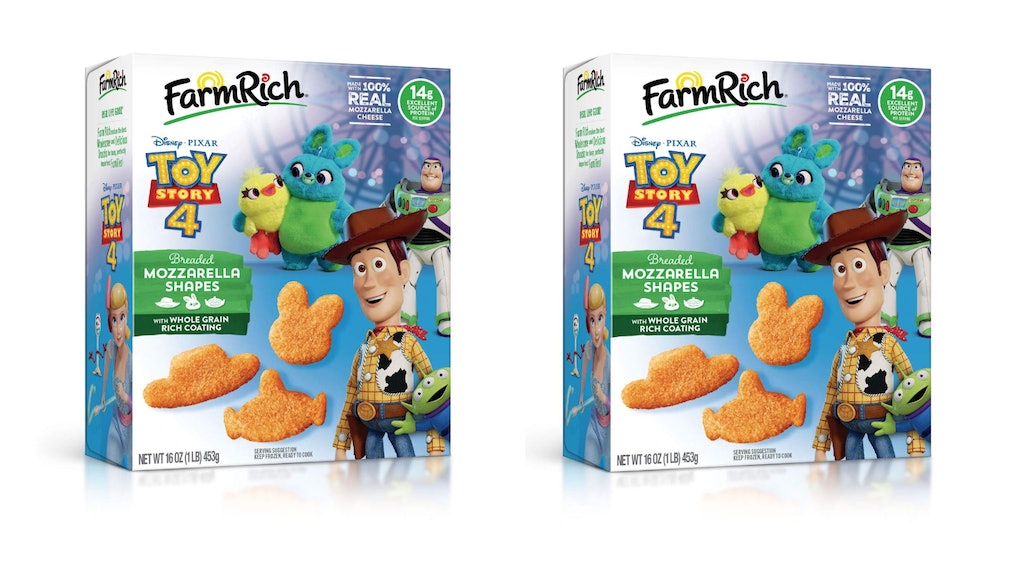 Disney Pixar's Toy Story universe has captured the hearts of countless people both young and old over the years. With Toy Story 4's recent release, fans are eager to revisit this iconic film in whatever way they can, whether it's seeing it multiple times in theaters or enjoying Toy Story-themed merchandise and treats. Speaking of Toy Story 4-themed treats, one company recently partnered up with Disney and Pixar to release a delicious snack based on the film. Disney and Pixar's Toy Story 4 Mozarella Shapes by Farm Rich are the perfect snack to help you get in the spirit of the film, but they might honestly be too cute to eat.

Farm Rich's new Disney and Pixar Toy Story 4 Mozzarella Shapes are the perfect cheesy, breaded snack for Toy Story lovers. According to Farm Rich, the mozzarella snacks come in three different shapes — Woody's iconic hat, space aliens, and Bunny, a brand-new toy character in the Toy Story universe. The snack is made with 100% real mozzarella cheese and each box is priced at $6.99 for a pound of mozzarella snacks, although pricing may vary by location. If you want to snag a box (or 10) of these delicious treats, you can head to retailers like HyVee, Meijer, Piggly Wiggly, Wegmans, Weis, Albertsons/Safeway, Food Lion, Stop & Shop, Giant Eagle, Shaws, Hannaford, Harris Teeter, and Amazon Fresh to satisfy your cheesy cravings, per the brand.

Shannon Gilreath, director of marketing at Farm Rich, commented on why the Toy Story 4 Mozzarella Shapes are the perfect snack to celebrate the fourth Toy Story movie and the Toy Story universe's 25-year anniversary in 2020. Gilreath said,

Snack time can be filling and fun, and this new product is both. We couldn’t be more delighted to partner with The Walt Disney Company and Pixar to create these Mozzarella Shapes to mark the release of Toy Story 4 and give fans a wholesome new snack food to enjoy at home.

Farm Rich isn't the only major company to collaborate with Disney Pixar on a Toy Story 4-themed product. If you consider yourself a sneakerhead, you might be excited to hear about Adidas x Toy Story 4, a sneaker collaboration between the movie franchise and the athletic-wear brand that graced the world with Toy Story-themed sneakers in June

If you're a big Toy Story fan, its pretty undeniably cool that there's another film in theaters that's accompanied by a bunch of cool products and treats to help you celebrate Woody, Buzz Lightyear, Little Bo Peep, Forky, and more. What a time to be alive, folks!

More like this
Here's Where To Buy Naturdays Pineapple Lemonade Beer To Unleash Your Summer Vibes
By Cianna Garrison
How Long Is Pepsi Blue Available? Don't Wait To Sip The Colorful Cola
By Cianna Garrison
Here’s How To Order A ‘Princess & The Frog’ Tiana Frappuccino At Starbucks For A Unique Combo
By Lara Walsh
Stay up to date