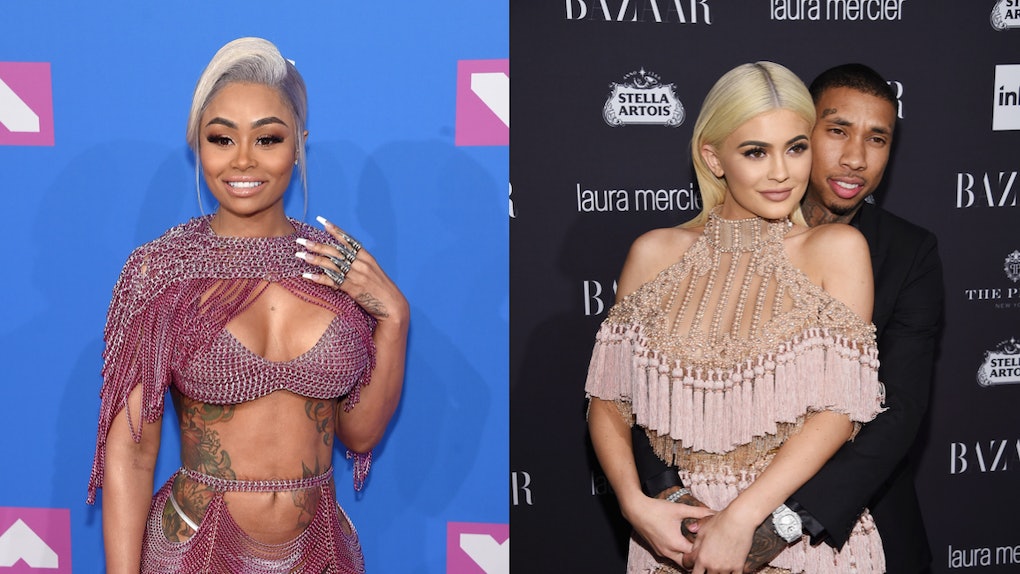 Did Tyga Cheat On Blac Chyna With Kylie Jenner? Chyna Just Spilled So Much Tea

On The Wendy Williams Show on May 15, Blac Chyna came, she saw, she spilled the tea, and I am shook. During her Wendy debut, Chyna opened up about about everything — her breakup with Tyga, his relationship with Kylie Jenner, and even which of her two famous exes she'd consider a better lover. (She said Rob Kardashian, BTW!) I'm telling you, it was a lot. Talking about her past relationship with the "Rack City" rapper raised the question: Did Tyga cheat on Blac Chyna with Kylie Jenner? Willams asked, and Chyna answered.

It's important to note that Chyna and Kim Kardashian were reportedly friends before Jenner and Tyga became involved. Chyna and Tyga were engaged, had just welcomed their son King Cairo, and living together in the same neighborhood as Kardashian. At the time, Jenner was 16 years old. When Williams asked Chyna what exactly happened between she and Tyga, she said, "With relationships, sometimes things don’t work out. Then also, sometimes things just kind of like, spread you different ways, and I guess maybe that’s kind of what was going on, and whatnot“ she continued. “But the way that it went about, like publicly, wasn’t right. Even then even like, not publicly, it wasn't right."

"It was nothing to do with him cheating, or you cheating, or anything like that?" Williams asked. "No, no," Chyna insisted. "But something did kind of expedite all that," she said, about her breakup. "So Tyga started dating Kylie and whatnot, and he had threw her like her 17th birthday party, so, after that happened that’s when, of course like the family was like ‘Alright bye girl,’ and kind of like threw me underneath the bus."

"How did you know they were dating?" Williams asked. "Kind of like, when I got thrown out," Chyna responded. "Thrown out of the mansion that Tyga was living in?" Williams asked. "Yep," Chyna said. Elite Daily reached out to Tyga's teams about Chyna's claim that she "got thrown out" but did not hear back by the time of publication. "And did he tell you because he's got a new girlfriend, or did you see something?" Williams asked. "No, I'd seen it, and it was kind of already like, everywhere, publicly, like him throwing her 17th birthday party and what not."

"Was he kissing her?" Williams asked. "No, but they were definitely together," Chyna said.

The timeline is blurry, yes. But the truth is, it seems like no one will ever truly know exactly what happened between these three. If what Chyna is saying is fact, then it seems like Tyga may have begun dating Jenner either right before officially ending things with Chyna, or right after. The world may never know. Elite Daily reached out to Jenner and Tyga's teams about Chyna's claims but did not hear back by the time of publication.

All their past issues aside, however, Chyna said that she has no problem with Jenner anymore, "because, you know, that is Dreamy's auntie," she said. "And when me and Robert were together, we kind of put those differences aside. From now on, I’m fine on my side and I’m hoping that we’re good."