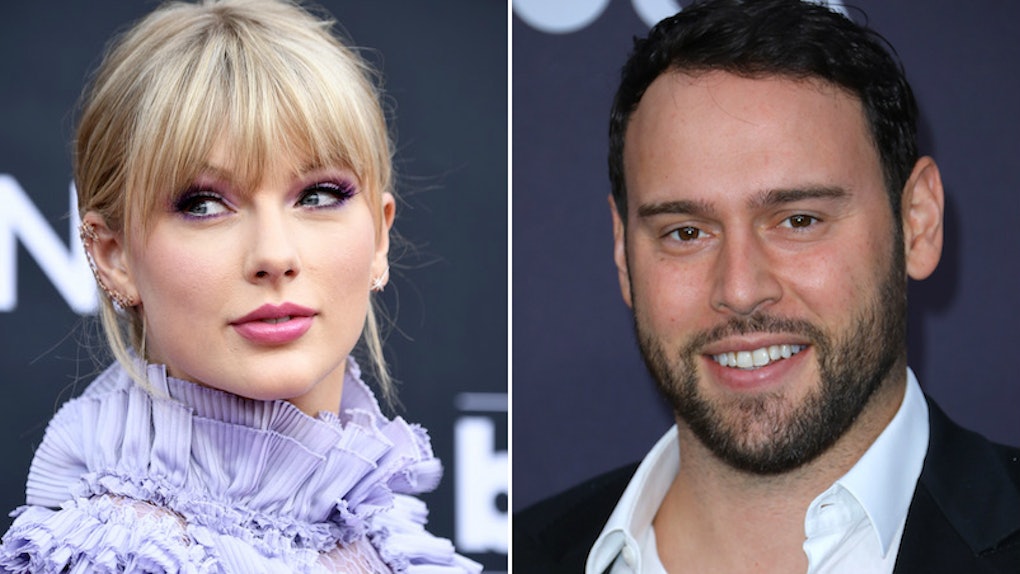 The shaaade, hunny. If she hasn't made it explicitly clear, Taylor Swift is not here to mess around. She is here to make music, make money, and anyone who stands in her way can take a hike. This especially includes music manager Scooter Braun, who Swift claims has bullied her throughout her career. People are asking the question: Did Taylor Swift shade Scooter Braun in her Prime Day performance? I mean, it's subjective... but yes. Fans caught a video of Swift leaning on some choice lyrics pretty freaking hard in her song "Shake It Off" and there are really only a few ways Swifties can interpret it.

The Scooter Braun saga is long and winding, but here's the latest: Swift recently penned a lengthy letter on her Tumblr account explaining that Braun purchased the label she used to be signed under, Big Machine Label Group. This includes her music catalog and masters from before 2019. Swift wrote that she knew Big Machine's CEO Scott Borchetta would "eventually" sell her masters, but she never imagined in her "worst nightmares" it would be to Braun. She wrote:

All I could think about was the incessant, manipulative bullying I’ve received at his hands for years ... Any time Scott Borchetta has heard the words ‘Scooter Braun’ escape my lips, it was when I was either crying or trying not to. He knew what he was doing; they both did. Controlling a woman who didn’t want to be associated with them. In perpetuity. That means forever.

In his defense, Borchetta wrote his own response to Swift on Big Machine's website where he explained that, had she resigned with his organization, "100% of all Taylor Swift assets were to be transferred to her immediately." (She declined to resign and instead linked up with Republic Records and Universal Music Group.) Borchetta also claimed that from his perspective, Braun "was never anything but positive about Taylor."

At the time of publication, Braun had yet to publicly respond to either note, but from the looks of Swift's recent Amazon Prime Day show, she's ready whenever he is.

The Prime Day performance landed on Wednesday, July 10, and was Swift's first show since the Swift/Braun scandal. While she certainly did not say his name, she did imply it with her full body. In the middle of singing "Shake It Off," Swift dramatically emphasized the famous lyrics, "While you've been getting down and out about the liars and the dirty, dirty cheats in the world / You could have been getting down to this sick beat."

She hit those words hard, you guys. Take a look:

One more time for the folks in the back.

There are only so many ways one could read into this, y'know? Naturally, Swift's fans are like, "Ya hear that, Scooter?!" Twitter responded by citing Braun and this feud everywhere.

Come out, come out, wherever you are, Scooter.

Swift is ready and waiting and she's wearing a sparkly leotard. Brace yourself.

More like this
Taylor Swift & Olivia Rodrigo's Instagram At The 2021 BRITs Is A Dream Come True
By Brandy Robidoux
21 Taylor Swift Lyrics About Breakups You'll Relate To All Too Well
By Joyann Jeffrey
Is Olivia Rodrigo's "Good 4 U" About Joshua Bassett? Fans Are Convinced
By Michele Mendez
Stay up to date