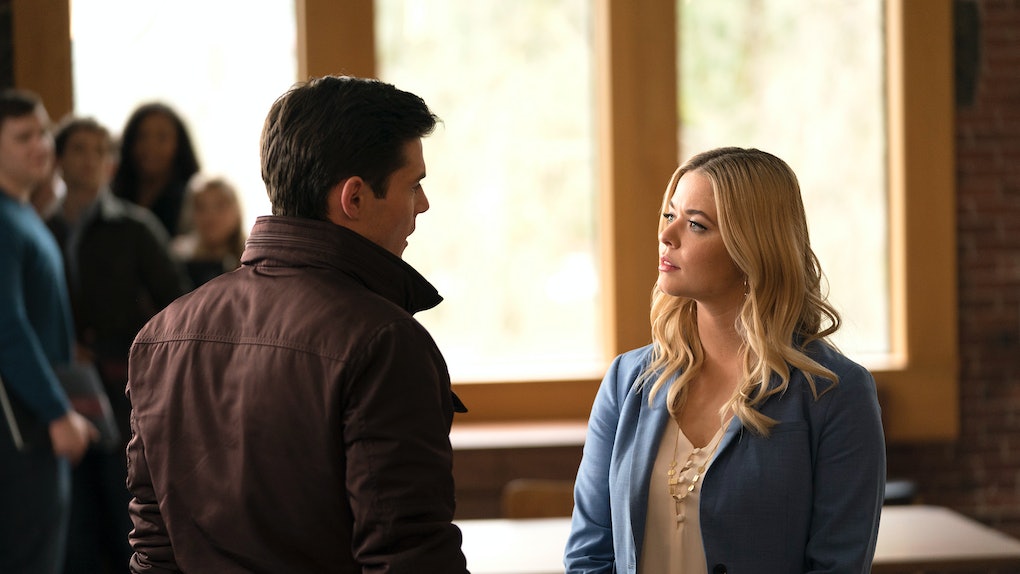 Did Nolan Want To Meet Alison On 'The Perfectionists'? His Last Text Could Be A Sign

This post contains spoilers for Pretty Little Liars: The Perfectionists. Messages from beyond the grave are nothing new in the world of Pretty Little Liars, and its spinoff series The Perfectionists is following suit. Days after Beacon Heights University student Nolan Hotchkiss was found dead, former Liar Alison received a text message from him asking to meet her on the roof of a building. Getting a text from a dead boy is already creepy, but toss in the knowledge that Nolan was murdered on that roof, and it becomes clear that Alison is more linked to the mysterious killing than fans thought. Did Nolan really want to meet Alison on The Perfectionists? It seems that he understood Alison more than she realized.

ICYMI, when he wasn't manipulating a trio of students on whom he had groundbreaking information, the popular Nolan (Chris Mason) was hiding a major secret from everyone else in his life. While the school and his family believed that his sister Taylor (Hayley Erin) killed herself a year before, Nolan was actually helping her hide in the woods nearby. There, Taylor was keeping track of their mother Claire's (Kelly Rutherford) activity on the Beacon Guard security system and trying to uncover the reason why she had extra surveillance on Nolan and his group of terrorized classmates.

At the end of March 20's Perfectionists premiere, Nolan met with a hidden figure on the roof of a campus building called Thorne Hall. He told the mysterious person that Taylor was alive and that they needed help because their time was running out. The figure then presumingly shoved Nolan to meet his death via impalement.

At first glance, it looked like someone trusted by Nolan betrayed him, but Alison's (Sasha Pieterse) strange revelation in March 27's "Sex, Lies and Alibis" changed that perception.

Three days after Nolan's death, the teaching assistant received a text from him saying, "Meet me on the roof of Thorne Hall. I need your help." Understandably freaked out, Alison first went to Mona (Janel Parrish), convinced that the admissions staffer was up to her old tricks and pretending to be Nolan. While she wasn't Nolan's literal killer, Mona was convinced his death was her fault, as she never warned Claire that Nolan had the makings of a student who would cause others at BHU to completely snap. In Mona's eyes, her lack of action inspired the murderer to make his or her move.

Meanwhile, Alison began believing that the text was a fake and someone was trying to frame her in Nolan's death. However, Mona presented info suggesting otherwise, revealing that there was a partial Beacon Guard blackout around the time of the murder. This affected the campus cell tower, explaining why Nolan's text arrived so late, and also shut down the security cameras around Alison's house. There was no footage of her area during that time frame, meaning that for now, anyone who was there when Nolan was killed has a somewhat shaky alibi.

So, what does this technological snafu mean? Unless a big twist is in store, Nolan likely intended to confide in Alison, who had previously suspected Nolan knew more about her past than the typical student. Someone seemingly intercepted his message and then met Nolan on the roof while posing as Alison. Unless the killer revealed themselves to Nolan before he plunged to the ground, the student might have died believing that Alison attacked him.

Nolan trusting in Alison may also have something to do with her physical resemblance to Taylor. We know that Alison reminds Claire of her daughter, but perhaps Claire wasn't the only Hotchkiss who read up on her before she arrived in Beacon Heights. Here's hoping that Nolan and Taylor's connection to Alison is explained soon.

Season 1 of Pretty Little Liars: The Perfectionists continues on Wednesday, April 3, at 8 p.m. ET on Freefrom.