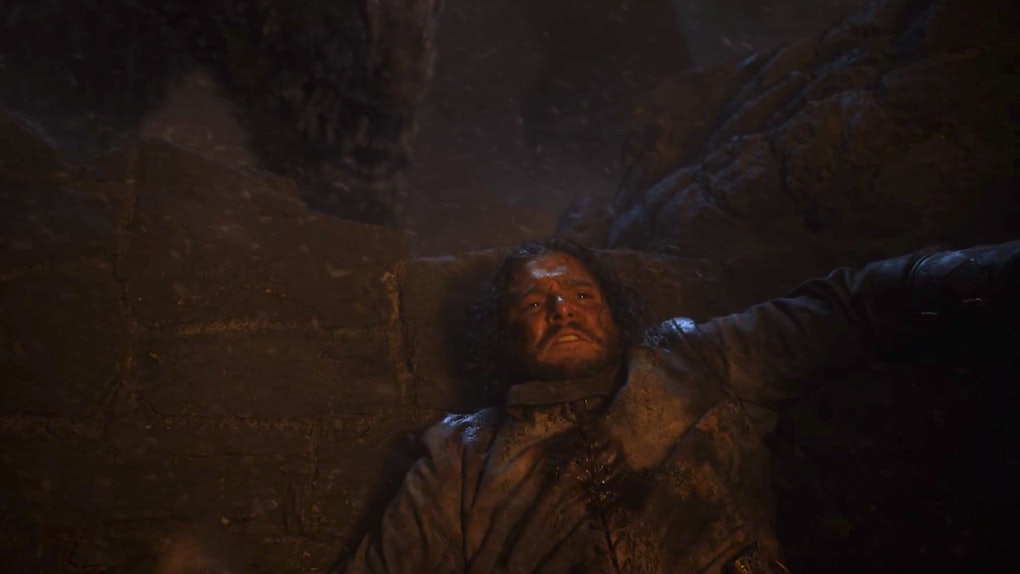 Game of Thrones fans are still reeling from the game-changing new episode that aired on Sunday night, and amidst all the darkness in the Battle of Winterfell bloodbath, some very interesting new details are coming to light. Because of all the messy carnage, the 82-minute length, and the general lack of any light in the most recent episode, it felt like a lot of smaller details could have potentially fallen to the wayside. Now that fans have rewatched the battle a few times, though, a new theory is posing the question: Did Jon Snow help Arya kill the Night King? Let's break down the scene that fans now think could have been a pivotal moment in the episode.

Spoiler alert: This post contains spoilers from Game of Thrones Season 8 Episode 3, "The Long Night." Fans have long predicted that it would be either Jon Snow or Daenerys Targaryen to take down the Night King, but in a twist ending, Arya Stark actually snuck up on the White Walker and stabbed him with her Valyrian steel dagger, reducing him to a pile of icicles. But Jon may not have been entirely useless in the cataclysmic battle — one scene in particular may prove Jon's important role in helping Arya succeed in destroying the Night King.

As we see the Night King begin slowly advancing towards Bran near the weirwood tree, the show cuts to a scene of Jon Snow hiding under a piece of rubble from the undead dragon Viserion at the edge of Winterfell. Jon looks panicked, but then suddenly leaps up in a burst of energy to face the dragon and screams at it.

It is not entirely clear whether Jon is just screaming in general or screaming a specific word, but fans on Reddit think Jon is screaming "Go!," and you can definitely hear that upon rewatch. This is important because it suggests that Jon is distracting the dragon in order to allow another person to escape it. Only a few seconds after this scene of Jon screaming, we see Arya sneak-attacking the Night King.

All of this paints a picture where Jon Snow spotted Arya near Viserion as she was trying to make her way to the godswood, and to help his little sister out, Jon decided to potentially sacrifice himself by distracting the dragon so Arya could make it to the weirwood tree in time to kill the Night King. Thankfully, Arya was able to make it to her assassination appointment right on time thanks to Jon Snow's dragon-bait distraction, and in turn, she was able to save Jon from Viserion by killing the Night King, which also caused all of his army to crumble with him.

While this storyline of Jon helping Arya get to the Night King in time has not yet officially been confirmed on the show, it does seem to make sense, and it explains why Jon suddenly decided to stand up and scream in Viserion's face. Maybe Jon and Arya will confirm this theory in this week's new episode of Game of Thrones, which will are at 9 p.m. ET, Sunday night on HBO.