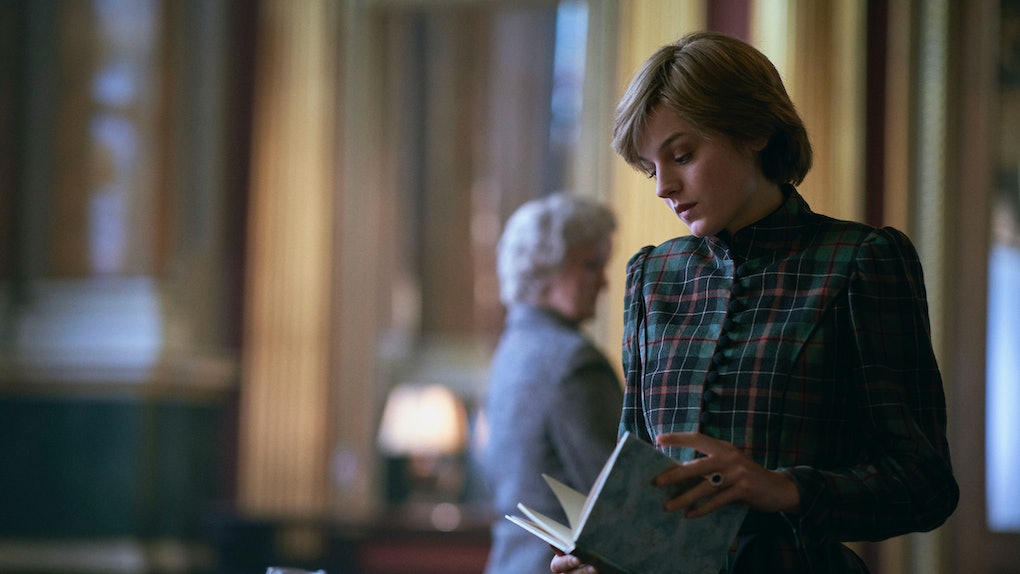 Fans knew for a long time that Season 4 of The Crown was going to be "The Diana Season." Series creator Peter Morgan's career took off with the film The Queen, a historical drama about Queen Elizabeth's handling of Diana's death in 1997. A show covering Elizabeth's 60-year reign affords him a chance to dig deeper, chronicling her relationship with Lady Di from the start. And yet, some of the details of Diana's first months in the Palace might surprise viewers. For instance, did Diana really have Princess lessons, or did The Crown make that bit up?

Warning: Spoilers for The Crown Season 4 follow. Season 4, Episode 3 opened with Charles and Diana's engagement, and Diana then moved into Buckingham Palace. That is historically accurate. Charles and Diana's engagement was the first for the British royal family since the rise of tabloid newspapers. When it leaked that she was the Princess of Wales-to-be, the paparazzi swarmed her, and the Palace decided to move Diana in, where she would be protected.

But something else in the show happened upon Diana's arrival: a complete failure of protocol, as Diana curtsied in the wrong order to assembled family members. Diana's grandmother, Baroness Fermoy, was embarrassed, and insisted on formally training Diana in the princess arts. (In real life, Fermoy was indeed the family member who was around to help Diana. She was part of the Queen's Mother's staff, appointed as a Lady in Waiting in the 1950s, and promoted to Woman of the Bedchamber in 1960.)

Although there's no proof this exact faux pas happened IRL, it is almost certain Diana did have some of these lessons, as would anyone entering the royal family for marriage. As the series reminds viewers during Di's training, these "who bows to who" rules are centuries-old and do not come naturally to anyone not trained from them from birth. Both Kate Middleton and Meghan Markle reportedly underwent training in precisely these kinds of etiquette formalities.

But The Crown didn't necessarily add these scenes in just to give a Princess Diaries feel to Diana's story. They served a larger point. As fans will note, Diana was deeply bored during these lessons, and Fermoy scolded her as a bad student. It's a pointed reminder of how young and immature Diana still was; she didn't have an inherent respect for the history she was being asked to join.

On the other hand, Diana did seem to enjoy her ballet lessons. But they were not part of Fermoy's lessons. The real Diana took ballet from a very young age, and in the scene when she and Charles first met, she was dressed for a dance recital. As fans saw in Episode 9, Diana genuinely loved performing. These particular lessons at the Palace were not about learning movement and grace. Instead, they were one of the few outlets she had in a stifling world.

More like this
'The Crown' Season 5: Netflix Release Date, Cast, Plot, & More Details
By Ani Bundel
6 ‘Schitt’s Creek' Spinoff Ideas That Are Simply The Best
By Rachel Varina
Who Is Cleo On 'Outer Banks'? Carlacia Grant Is New To Season 2
By Ani Bundel
Stay up to date