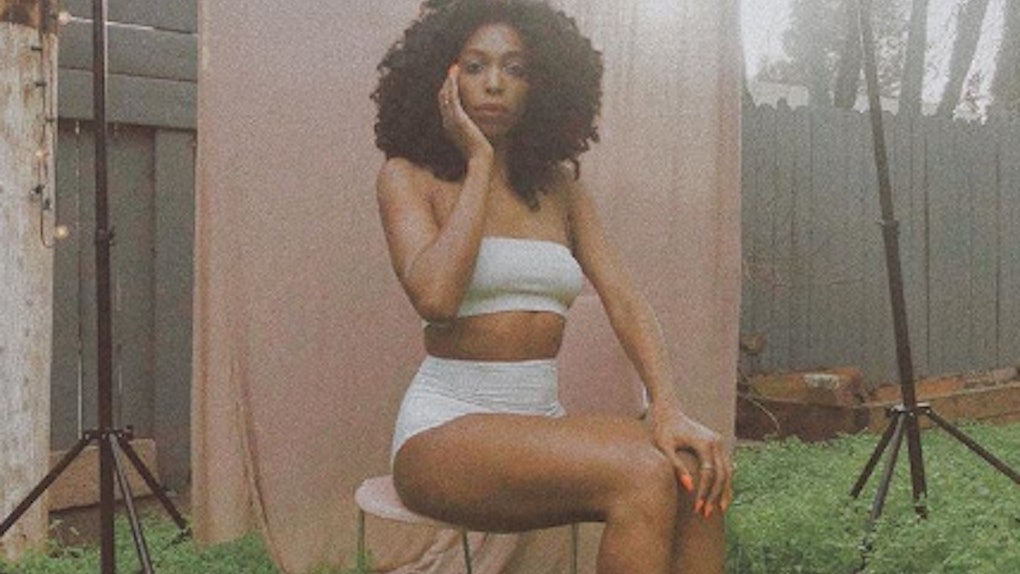 When healing from sexual assault, survivors frequently face victim-blaming and barriers to swift justice. And while movements like Time's Up and #MeToo bring more visibility to these issues, many conversations are still leaving out the realities of black women dealing with the aftermath sexual assault. Concerns that survivors, regardless of race, have about reporting sexual assault are made more fraught by racial tension with the police. And, on top of stigmas attached to being a survivor, black women are saddled with the stereotype of being resilient against all trauma. Enter Deun Ivory's photos of black sexual assault survivors.

Ivory is a photographer and art director of black wellness site Black Girl in Om. For the past year, Ivory has been working on "The Body: A Home for Love," a photo and event series that, in Ivory's own words, "centers healing through visual storytelling, and dialogue around sexual trauma and the black female body."

The photos feature 13 black women survivors who agreed to be a part of Ivory's project (you can engage with the photos via @thebodyahomeforlove on Instagram). Hazy, soft light blankets the black women — who are nude or semi-nude, but never sexualized. Some women look at the camera and some turn away, with the light glinting off their brown skin. But in every one, there is a defiance that brings home the fact that they're subjects, not objects. It's quiet and powerful. With the symphony of soft fabrics, gentle light, earthy greens, and terracotta pinks, there's peace in that power. It's a perfect backdrop or visual soundtrack for healing.

You can also experience Ivory's photos IRL. Ivory held a discussion at The Wing DUMBO in Brooklyn, New York, and an artist talk and exhibition at NYC's S12 Studio from April 3-5. On the horizon is an LA pop-up from May 17-19, a Chicago pop-up from June 21-23, and a run at New Orleans' Essence Festival from July 5-7. Intrinsic to the healing element of "The Body: A Home for Love" is having one day of the exhibition (Day 2 for NYC) be women-only. Ivory explained that having men present could be triggering or simply uncomfortable for survivors. "A lot of women appreciate the thoughtfulness behind the distinction of those days, because they get to choose how they want to experience the stories. Choice is always important to reiterate in these types of spaces," Ivory says. "Because it’s not about me. It’s about the people I'm serving."

From the beginning, she knew she wanted a community element to support the photos. Ivory created the event series with black women's distinct experiences in mind. "We have other generational traumas and narratives perpetuated in our culture that other races may not understand or have gone through," Ivory, who is black, tells Elite Daily. "Often times, we don’t have spaces to breathe easy or practice vulnerability without judgment. We don’t have a safe space to cry or talk about all the ways in which we’ve been robbed of certain aspects of freedom or joy."

Ivory believes that black women are left out of greater dialogues about sexual assault because black girls are seldom viewed through the lens of innocence in the U.S. "Somehow, we’re blamed for our own abuse or socially constructed to believe that what we wear — or how we show up in the world or our development of curves at a young age — justifies us being assaulted. We’re demonized and sexualized very early on," she explains. "We’re labeled 'fast-tailed' or 'hoes' at a young age because grown men are preying on us, which the world believes is our fault."

These culturally-specific concerns are the driving factors for "The Body: A Home for Love." April may be Sexual Assault Awareness Month, but the conversation Ivory is working to foster has implications all year long. In the United States, black women are more likely to be raped than women on average: A little more than 21 percent of black women are sexual assault survivors, compared to about 19 percent of all women, as cited in a 2017 report on the state of black women in the United States from the Institute on Women's Policy Research. In general, about 29 percent of black women experience intimate partner violence (whether that's rape, physical assault or stalking) of some kind in their lifetime. That rate is 35 percent higher than that of white women and about 2.5 times the rate of women of other races, according to the U.S. Department of Justice.

Sex educator and Sex Ed in Color podcast host Cameron Glover also believes that black women and non-binary folks are "still largely left out of the conversation of sexual violence." Glover's perspective is that it's especially important for women and non-binary people of color to have access to survivor resources, because their intersecting identities make it more difficult to work through trauma. "Survivors of sexual violence often feel certain things: guilt, anger, shame," Glover explains. "But these feelings can be amplified for black survivors because of the additional burdens of racism, misogyny, and heterosexism."

Likewise, Dr. Brynez Roane, a black therapist who runs therapy practice Aya Wellness Services, finds that her patients' shame, worry, and guilt are rooted in a some key questions that reflect identity-based concerns: "How does this information get handled?", "Will I be believed or trusted, because I am a woman, I am a minority?" and finally, "Will people even take it seriously or care?" Research from the National Resource Center for Domestic Violence (NRCDV) shows that black women in particular wrestle with turning to the police, due to long-held cultural and institutional tensions. Black women find the lack of arrests for sexual assault cases particularly disheartening.

For every 1,000 rapes, only 230 sexual assaults are reported to police, according to data published in 2017 by the Department of Justice. And only 46 of those lead to arrest. Not only does the U.S. legal system not take sexual assault seriously — for contrast, for every 1,000 robberies, 619 are reported and 167 lead to arrest — but there's also a larger framework that makes survivors feel penalized for speaking up. In a 2013 study by the Department of Justice, 20 percent of sexual assault survivors who didn't report said they feared retaliation. Thirteen percent didn't believe that the police would even help and another 13 percent felt it was too personal to share. Other respondents said they felt like their sexual assault wasn't important enough to share or that they didn't want to get their abuser in trouble.

The NRCDV study on violence against women of color also touches on how black women have to push back on the stereotype of being "domineering." Seen by many as aggressive, black women are then discouraged from speaking out, according to the NRCDV. Black women also are also burdened with the myth of being "exceptionally strong under stress" and "resilient." These attitudes and approaches to black women's pain shut down any opportunity for black women to be vulnerable —  even when they need it most.

It's because of these layers that Glover says she sees survivors who are already marginalized by their identities making their own resources. Survivors of color often are often uncomfortable with or distrustful of the institutions already in place. "When I think about the folks that are prioritizing survivors and their healing, it's often the black women and non-binary folks that do it out of necessity— because they can't turn anywhere else." Ivory is a prime example of that.

Ways of dealing with trauma vary just as much as manifestations of trauma do. (Thirty-one percent of survivors develop PTSD over the course of their lifetime, according to a study by the National Violence Against Women Prevention Research Center.) When it comes to working through trauma, Roane says, "My work is to help make the situation not as big." Still, she emphasizes, "It never goes away. And that’s hard, because people want it to be completely wiped away." Making situation "not as big" for Roane includes everything from helping her clients get of the bed for the day to guiding them in their peace-finding for years to come.

Renelle Nelson, a black marriage and family therapist at Kaleidoscope Counseling Services, often sees clients disconnect from their bodies because of sexual trauma and the resulting negative perceptions of self-worth. "The survivors I work with self-soothe during sex by going somewhere else," Nelson tells Elite Daily. "‘You can have my body, not my mind.’ They sometimes feel like they don't want to connect out of fear of enjoyment [or that] they might want it more often. Their mission is to please, not receive."

So, Nelson focuses on helping her clients reconnect with their bodies to heal. And one way she encourages doing that is by survivors taking ownership of their sexual pleasure. "We have to release all the unhealthy narratives, relearn our bodies, and take control of our pleasure — learning, despite what we endured, we deserve pleasure," Nelson says.

Along with therapy, one way survivors can begin to heal is with a social network who looks out for them and puts the ball in their court. The best way to do that is, Roane says, "helping to promote choice." Because, as Roane adds, survivors often know their abuser. According to 2017 Department of Justice data, about 75 percent of survivors know the person who sexually assaulted them. "Which brings a whole ‘nother layer of confusion. So, allow them the space to forgive how they want to forgive."

Another way to support survivors is to be vocal in your support. Roane personally appreciates the Me Too movement — a movement founded by black activist Tarana Burke in 2007, long before the #MeToo hashtag — with bringing some visibility to the cause, particularly for black and queer women. And beyond showing your support in protests and social media posts, you can also support sexual assault survivors by donating to national advocacy orgs. You can help keep the Rape, Abuse & Incest National Network's resources and hotline, the reproductive safety ensured by Planned Parenthood, and the college-focused advocacy of End Rape on Campus up and running — by donating money or simply your time.

Still, Glover, says, "There needs to be more active seeking out of survivor-created resources, paying them for the work that they do, and sharing resources and spaces to do better at supporting them overall." In the case of Ivory's work, the exhibition itself is free but there are ways to contribute to "The Body: A Home for Love" financially. Ivory is currently in the process of transitioning her community series into a non-profit and is looking to translate her goal of centering black healing to other media, such as a podcasts or book.

In the meantime, Ivory's marriage of intimate human connection, identity, and creativity lives on. "I love putting together thoughtfully curated, immersive experiences for black women, especially in beautiful spaces — because we deserve that," Ivory says. "We deserve to experience beauty and mind-blowing aesthetics just like everyone else. It brings me joy to provide that type of access to my community."

In a society that doesn't value or nurture black women the way it needs to, "The Body: A Home for Love" is more than a cool photo series or pop-up. It's a beacon. It's an act of radical self-love.

If you’ve experienced sexual assault, you’re not alone. To speak with someone who is trained to help, call the National Sexual Assault Hotline at 800.656.HOPE (4673) or chat online at online.rainn.org.