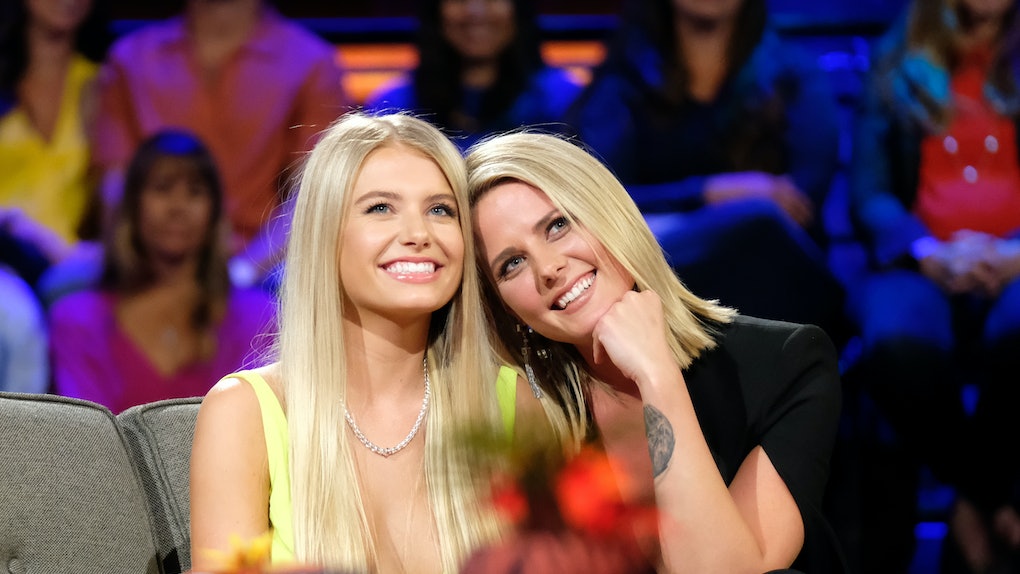 Over the course of Bachelor In Paradise’s six seasons, several couples have stolen my heart, but Demi Burnett and Kristian Haggerty replaced them all when they made Bachelor Nation history by becoming the first same-sex couple to get engaged. Honestly, I sometimes feel a bit cynical toward reality TV romances. I mean, don't get me wrong, it's very entertaining, but there's always a little part of me that doesn't always trust it’s real. But Demi Burnett and Kristian Haggerty's body language after Bachelor In Paradise says exactly the opposite about them. When Demi dropped to one knee to propose, well, let's just say it was clear their love is as real as it gets. Now that the series has aired and they can finally be out and proud about their engagement, I asked a body language expert to take a look at how the couple is doing after their whirlwind romance.

The pair dropped by Good Morning America on Sept. 24 to talk about what it’s been like to get engaged and live their truths so publicly, not to mention Demi’s struggles with understanding her sexuality. “I think there was just a lot of, like, walls within myself and like a lot of parts of myself that I wasn’t fully in tune with and didn’t really understand,” Demi said on GMA. Fortunately, this process helped her break down those walls.

“I never really watched much of Bachelor Nation or even thought in a million years I’d be on a reality show,” said Haggerty. “I know I’ve said that before in past interviews but I can hands on tell you it was all very real."

While the couple took a huge step on Bachelor in Paradise, Demi told People that, for now, they are taking things a bit slower and just enjoying the relationship. “I don’t think we should jump into moving in together,” she said. “We already got engaged in such a short amount of time. We need to have time to date and have a steady-paced relationship.”

To gain a little more insight into their newfound relationship dynamic, I turned to Traci Brown, body language expert and author of Persuasion Point: Body Language and Speech for Influence. She took a closer look at this dynamic duo's interactions post-paradise, and what she sees about their connection is promising. Here's what else she had to say.

The couple sat down for an interview during After The Final Rose and got cozy on the couch. Brown tells Elite Daily she can see that there's a real connection between these too. “These two are really close and happy with each other,” Brown says. The giveaway for Brown is the placement of the couple’s feet and how they are gathered up together. “You can tell a lot about how close and intimate people are by looking at their feet. See how they’re almost playing footsie?” Brown says that's a dead giveaway of true intimacy.

2. They’re On The Same Page Emotionally.

Demi posted these sweet photos of her getting up close with her new fiancée on Insta, with the caption, “Love whoever the hell you want." It’s a beautiful sentiment, and in this image, Brown sees that Demi means it. She also notes that Kristian appears to be the driving force in the relationship. “I think it tells a lot about who’s in control in the relationship. [Kristian] is saying ‘Let me sweep you off your feet,' and [Demi] is hanging on for support,” says Brown. But, she is quick to add that there is still balance in the emotion. “They both have similar smiles on their faces, so that’s a good sign they’re on the same page,” she explains.

3. They Are Consistent In Their Body Language.

During the couple’s interview with Good Morning America, where they opened up about their identities and what was next for them, Brown notes they remained consistent and in-sync in their body language. “These two look great. Here, they're matching their body language. That says they’re on the same page. It’s what great couples do,” says Brown. Eeep!

While only time will tell if this romance really is going to go the distance, for now one thing is clear: The connection is real and the love is strong between these too, or so it seems from their body language. I stan!