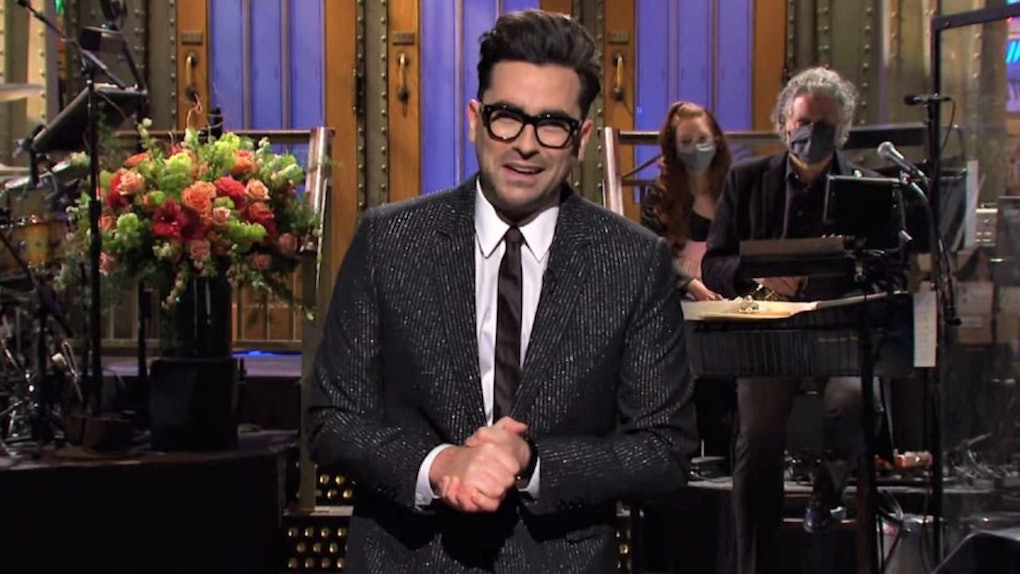 The Saturday Night Live cast is like a family, working closely together week after week to create silly, topical sketches. But while the group of comedians stays more or less the same for years, the show's celebrity hosts are only around for a week at a time. In recent weeks, a new tradition has begun among the show's hosts to help their successors feel welcomed and encouraged. It all started with Dan Levy's Saturday Night Live Post-It note message to Regina King, which inspired a chain of kindness that is still going strong.

Halfway into SNL Season 46, Dan Levy made his debut as host for the Feb. 6 episode. Ever since his sitcom Schitt's Creek blew up into a must-watch phenomenon just in time for its big series finale early in 2020, it was only a matter of time before Levy made it onto Studio 8H stage.

Not only did Levy make an impact on-screen throughout his hilarious episode, but as revealed on Instagram, he also started a new host-to-host tradition behind the scenes. When Regina King made her hosting debut the week after Levy, she posted a pic of the encouraging Post-It note he left on her dressing room mirror: "Regina! You got this! Much love, Dan," the note read.

The Post-It note tradition continued for the next two weeks, as Bridgerton star Regé-Jean Page shared the supportive note King left for him ahead of his SNL debut. "Regé-Jean, you got next and you are going to be amazing! I'm a big fan," it read.

Page kept the love going by leaving Nick Jonas a note to encourage him for his Feb. 27 hosting gig, which read, "Just have the best time, Nick!"

This definitely feels like a new tradition that could continue to be a sweet, regular sign of encouragement for all future SNL hosts. Since SNL is taking a month off before it returns with its upcoming Maya Rudolph-hosted episode on March 27, fans will have to wait to see if Jonas kept this Post-It chain going. Here's hoping Rudolph will share a pic of the note if Jonas left her one, and that this new tradition can keep on going.