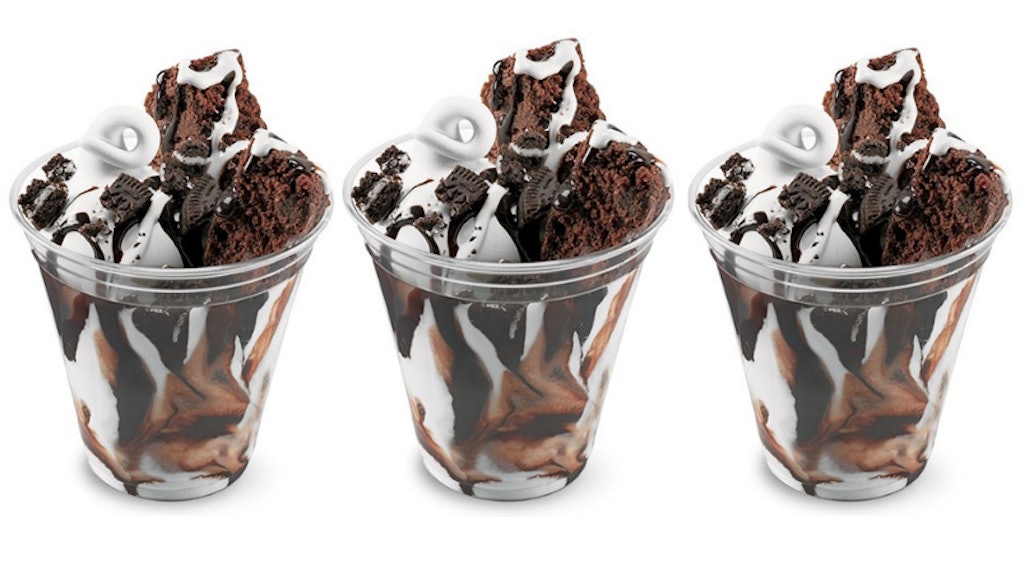 It's finally starting to feel like patio season, which means I'm swapping out all my sweater weather eats for tasty treats that will help me cool down when summer comes. There's so many new options to choose from, but my favorite choice yet might be Dairy Queen’s Cupfection Sundae with brownies and Oreos, which I'll basically sum up as a chocolate lover's dream in a cup of heavenly goodness. Featuring an indulgent drizzled marshmallow topping, rich chocolate sauce, and DQ's trademark vanilla soft-serve base, this decadent creation is the next-level antidote to your sugar cravings that you need, not want, in your life.

As a self-professed Oreo devotee, my tastebuds were full-out rejoicing when I learned that Dairy Queen quietly unveiled a brownie and Oreo-infused option to its new Cupfection lineup. In case you haven't checked out the fast food chain's Cupfections yet, they seem to be an elevated combination of Dairy Queen's Cake Shakes and their Sundaes. In addition to the Oreo and Brownie option, there's a Summer Berry Cake Cupfection that appears to be pretty similar to the Summer Berry Sundae except for the addition of layered vanilla cake, choco chunks, and a whipped topping.

While that one looked pretty tasty, Dairy Queen's Brownie and Oreo Cupfection instantly caught my eye. Per the product description on DQ's website, it's described as "cold, creamy DQ vanilla soft serve, topped with a Triple Chocolate Brownie, Oreo cookie pieces, rich chocolate sauce, and marshmallow topping." TBH, I'm drooling a little just reading those words. And yes, the Triple Chocolate Brownie that's referred to in the description is the same chocolatey creation that's topped with Cocoa Fudge and choco chunks, then served hot from the oven at DQ locations.

It's not exactly a secret that Dairy Queen's Oreo-inspired dessert game in on point. Whenever I'm craving the flavors of cookies and cream, I'll head to my closest DQ drive thru and order their Oreo Cookie Blizzard Treat. Honestly, I thought the chain had outdone itself when it released a limited-edition Oreo Cookie Jar Blizzard (which upgraded the original recipe with the addition of chocolate chip cookie pieces and fudge) for the month of April.

From the rave reviews on the Twitterverse, however, it sounds like DQ's latest offering is definitely giving April's Blizzard of the month a run for its money.

Several customers noted that the creation is pretty similar to the Oreo Brownie Earthquake that the company rolled out for a limited time earlier this month, so I'd keep that in mind when deciding if you want to try it out.

Just a few words of caution: It sounds like the chocolatey Cupfection is still rolling out and won't be available at all locations just yet, per a few disappointed DQ visitors on Twitter, so I'd recommend calling ahead if you want to find a storefront that's vending these bad boys. In addition, a Dairy Queen rep didn't immediately respond to an Elite Daily email inquiring about how long the Brownie and Oreo Cupfection will be available. In other words, it could be around anywhere from just a few weeks to a few months, so I'd definitely seize the opportunity to give this treat a try — and report back to the rest of us if you spot one on your next DQ run.