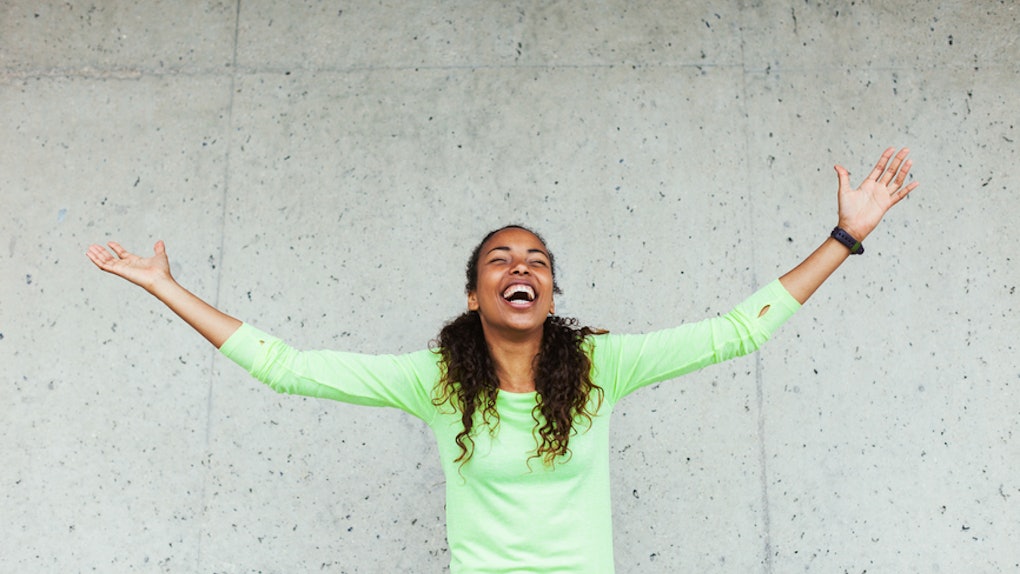 Cursing While Working Out Might Boost Your Performance, So Let Your F Bombs Fly

You've been there before, I know you have. You're in the middle of a ridiculously difficult workout, and suddenly, the cuss words just start raining from your mouth like a summer storm. Just yesterday, while I was in a dance-cardio class, I was swearing like an angry trucker underneath my breath because I was so damn exhausted. And while cursing certainly felt like it helped me get through my workout, believe it or not, there's now actual scientific evidence that cursing while working out not only expresses how difficult that last set of leg lifts is, but actually makes your workout more effective.

Sounds almost too good to be true, right? Well, a study published in the journal Psychology of Sport and Exercise says it's actually pretty darn true. The study found that swearing aloud can improve your physical performance, your strength, and your power while you work out.

The study, which was conducted by Dr. David K. Spierer of LIU Brooklyn and Dr. Richard Stephens of Keele University in the UK, asked people to identify a swear word that they might use if they were to accidentally bang their head on something. For the non-swearing trials, they were asked to identify a word they might use to describe a table. The participants were then asked to hop on some stationary bikes and do a couple of strength-related tests.

In the first section of the study, 29 participants sat on a stationary bike and pedaled as hard as they could. During their first ride, they were asked to swear during the workout, and then they did the same test again, but that time, without swearing. Then, in the second section of the study, 52 participants used a hand-grip device that tested grip strength, and the first time around, they did so while using their chosen curse word, and then they performed the task again while saying the non-swear-word.

The results? Swearing while doing these various exercises was shown to produce nearly a five percent increase of initial power during the 30-second stationary bike test, and an approximate eight percent increase in the test of hand-grip strength. I don't know about you, but I think that's pretty freaking cool. I'm never holding back my F-bombs during a workout ever again.

And, according to Dr. Stephens, there could be a psychological reason for the positive effects of cursing.

Swearing appears to be able to bring about improvements in physical performance that may not be solely dependent on a stress response arising out of the shock value of the swearing.

We know that swearing appears to be handled in brain regions not usually associated with language processing. It is possible that activation of these areas by swearing could produce performance improvements across many different domains.

Dr. Spierer agreed, and he went even further to say that cursing during a workout might "somewhat veil the effort and the pain of [a] really difficult task."

Ultimately, both doctors encourage the use of swear words in tasks that call for bursts of energy or strength, because their findings suggest that cursing might be helpful in getting the job done faster, more effectively, and with less pain.

Moreover, there's even been some speculation that the sense of catharsis you feel after dropping an F-bomb could have the same type of mind-body effect as when you use a mantra during meditation. Pretty cool, right?

Bottom line: I say anything that makes burpees easier is worth it, so when it comes to swearing during a sweat sesh, I'm gonna keep on f*ckin' keepin' on.

More like this
I Tried Singing While Running Like Miley Cyrus & OMG, My Lungs
By Rachel Varina
The Netflix Reality Show You Should Watch, Based On Your Zodiac Sign
By Chelsea Jackson
Each Zodiac Sign Has A Lucky Day Of The Week That Goes With It & Here's Yours
By Chelsea Jackson
Stay up to date