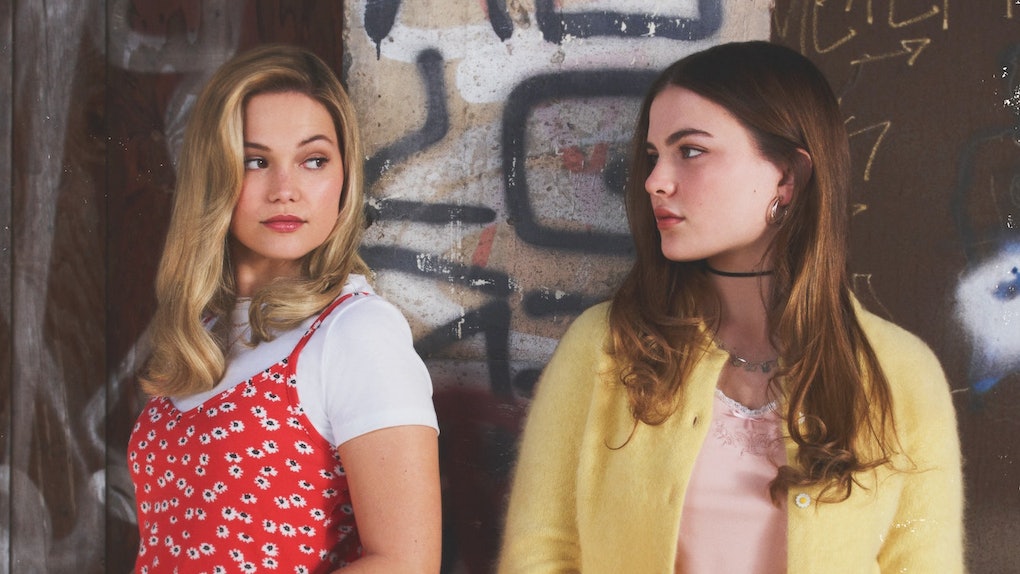 Freeform's highly anticipated YA series Cruel Summer is finally here, and with its debut comes a lot of questions. During the two-hour series premiere on April 20, it became very clear the show is full of mysteries to be solved and characters who might not be exactly as they seem. As fans wait for the story to unfold in the upcoming episodes, Cruel Summer’s leads Chiara Aurelia and Olivia Holt have hints about just how much viewers don't know.

Warning: Spoilers for Cruel Summer Episodes 1 and 2 follow. The series, produced by Jessica Biel, follows a popular girl named Kate (Holt) and a "nerdy wannabe" named Jeanette (Aurelia) over the course of three summers in the mid-1990s. After Kate goes missing, Jeanette somehow steps into her shoes, gaining popularity and the love of Kate's boyfriend, Jamie (Froy Gutierrez). When Kate finally escapes from captivity, she tells the world Jeanette knew she was being held hostage but did nothing to help rescue her.

As a result of Kate's revelation, Jeanette goes from newly popular to one of the most hated people in America. However, despite Kate's assurances that Jeanette was involved, Jeanette insists she had no idea where Kate was. As Episode 2 comes to a close, fans learn Kate wasn't being fully honest about her harrowing experience. Clearly, there's much more to the story than either girl is letting on.

For fans hoping to play detective, Aurelia and Holt urge viewers to watch upcoming episodes with eagle-eye vision. "There are so many clues. Everything means something," Aurelia tells Elite Daily. "Even the smallest thing may unravel and become something you wouldn't even imagine. That's what makes it super exciting. Watching it, you can question everything, question everyone. It's never going to be what you expect."

Not even the actors knew what was coming until they got their scripts for the Season 1 finale. "I think what makes this show so unique is that you kind of create your own theories while watching the show. I mean, I was totally wrong with all my theories," Holt says. "I never got one thing right, but it was really fun to talk with everybody about what was going to happen next, because we didn't know the ending."

Luckily, fans won't have to wait until the season finale to start figuring out what's going on. "Every single episode, you get a question that's answered," Holt explains. "And I think that that's what really drew me into this show ... [There are] lots of twists, lots of turns, lots of jaw-dropping moments for sure."

That said, it'll probably be a while before viewers find out the big mystery: Did Jeanette see Kate while she was kidnapped, or is there something else going on? Keep up as new episodes of Cruel Summer air on Tuesdays at 10 p.m. ET on Freeform before premiering on Hulu the following day.