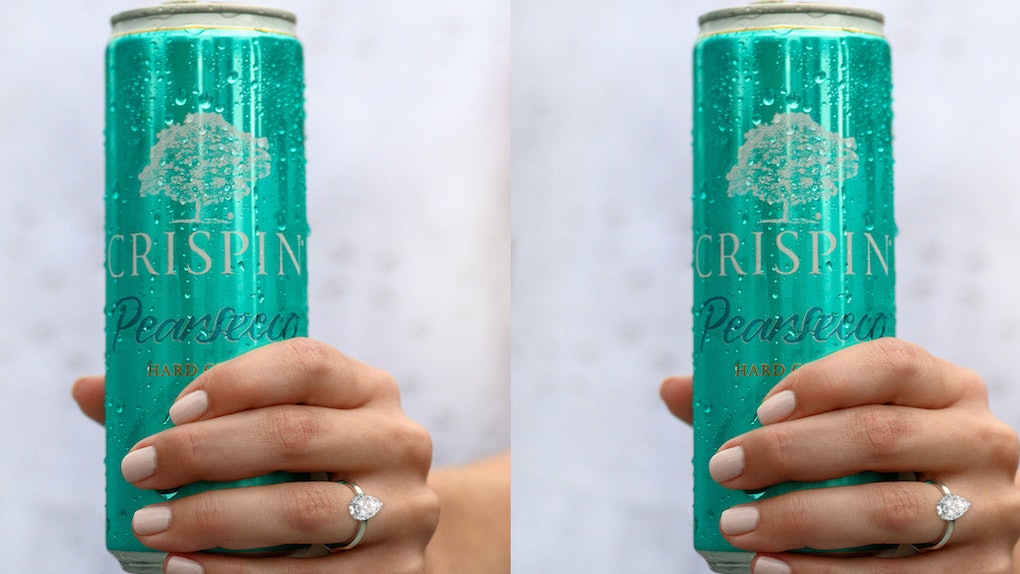 While some find romance in a glass of red wine or at the bottom of a martini glass, there are very few drinks I find more romantic than a simple glass of Prosecco. Plus, it's versatile, mixing impeccably with raspberries or other liquors. But to honor the undeniably special sip, Crispin Pearsecco's $10,000 engagement ring giveaway is kicking off National Prosecco Day on Tuesday, Aug. 13. And IDK about you, but my heart is about to explode.

Like I said, Tuesday, Aug. 13 commemorates National Prosecco Day, and those who are looking to commemorate the bubbly sip can enter to win a $10,000 pear-shaped diamond ring through Crispin Pearsecco, according to an email from the brand. All you have to do is explain why you and your partner are deemed the "perfect pear" (LOL), detailing your love story in a total of 150 words or less.

After writing a totally original and creative love story about you and your boo, find an image that represents your love. The photo must be a JPEG or PNG file, whether it's a photo from vacation or a mirror selfie from your bathroom. And once you have both the write-up and the image locked down, according to the official rules, you will send both materials to Pearposal@CrispinCider.com, before 11:59 p.m. CT on Friday, Aug. 30. I'm definitely anticipating some cute AF Prosecco-lovin' pics.

After the contest closes, the judging phase will officially start on Sept. 1, and it will last all the way through Sept. 11. Scores will be entirely based on detail, originality, and creativity, according to the Official Rules, and the highest score will officially win the contest. The winner will be notified via email on Sept. 13, but if the winner doesn't respond within 48 hours of being notified, the prize will be forfeited to an alternate winner. So, definitely keep an eye out on that inbox.

All valid entries must be made by those are 21 years of age or older, according to the Official Rules, so if you were born before Aug. 13, 1998, your entry won't count. Also, there is an entry limit of one per person, too, so definitely don't try to cheat the system.

According to the press release, Rappoport said:

Crispin celebrates the important moments that matter, so we are excited to help celebrate an upcoming marriage proposal. We know the cost of an engagement ring is a reason some proposals are put on hold, so we want to make it easier for one lucky couple to tie the knot.

You may recall when Crispin debuted its original Pearsecco flavor earlier in 2019, along with a special rosé and brut flavor. Each of them are seriously delicious, if you ask me, and if you don't end up winning the engagement ring giveaway, each flavor is bound to help you celebrate your proposal the right way.

Like I said, Prosecco is the epitome of romance — and really — what says "I love you" more than a pear-shaped engagement ring? Even if you aren't planning to propose right now, this could definitely come in handy some day... it's too sweet.