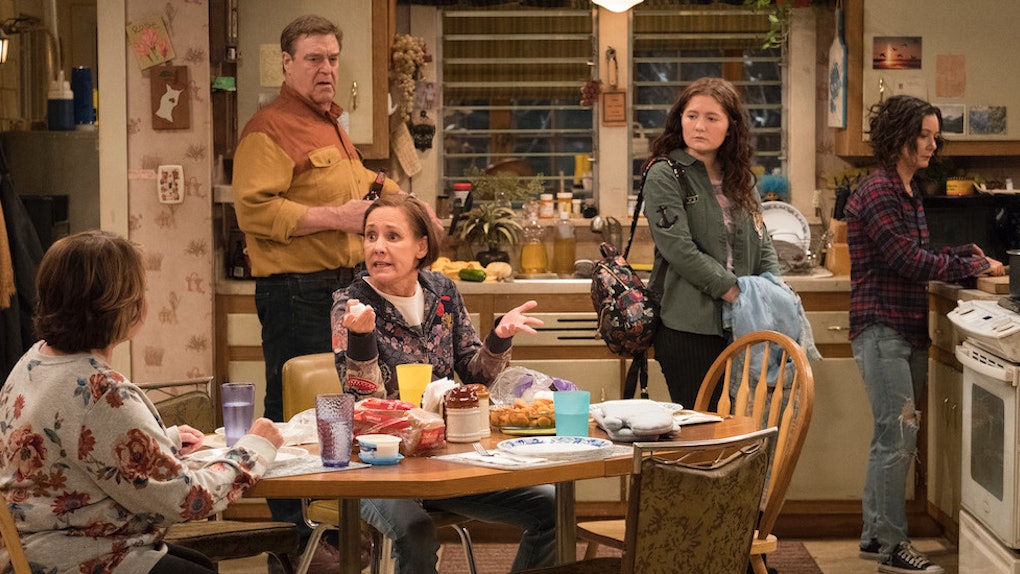 Could 'Roseanne' Get A Spinoff Without Roseanne? Mindy Kaling & Lena Dunham Will Write It

There might actually still be hope for Roseanne. Although ABC abruptly canceled the rebooted series due to racist tweets by the show's star and namesake Roseanne Barr, Deadline is reporting that executive producers Sara Gilbert and Tom Werner are going to meet with the network and writers to pitch possible continuations for the series that don't include Barr. And some pretty big names are offering their help in keeping the characters around. So, could Roseanne get a spinoff without Roseanne Barr? The show may actually have a shot at continuing despite the controversy.

After ABC canceled the revived Roseanne series earlier this week, one of the main reactions among fans was concern for the rest of the show's cast and crew. The network made it very clear in its statement that it was canceling the series because of Roseanne Barr's Twitter activity, but the sitcom has always been so much more than just Barr's central character. Jimmy Kimmel pitched the idea of re-centering the Roseanne-less series on John Goodman's character of Dan, and an fan-made image of a Laurie Metcalf-fronted spinoff called Jackie went viral online. Clearly, there is still a lot of love for the other characters on Roseanne, which might help the current spinoff discussions.

Also helping? The revival's impressive numbers back when it premiered. The cancelation was so surprising to many TV fans because nobody thought ABC would want to cut one of its most successful shows. Still, getting the show back up and running in some form after its highly publicized cancelation is being called a long shot and improbable by Deadline's sources.

Then again, the news that Roseanne Barr would no longer be involved in Roseanne attracted the attention of some pretty big names in the TV writing business. Both Mindy Kaling and Lena Dunham tweeted out spinoff-adjacent pitches after the Roseanne cancelation. Kaling said that she wants to write something for Laurie Metcalf and John Goodman, and Dunham shared that she would write a spinoff centered on Darlene's children (played by Roseanne newcomers Emma Kenney and Ames McNamara).

The spinoff support from Mindy Kaling and Lena Dunham may also help things along during the discussions with the Roseanne team. Plus, the Daily Mail is reporting that both John Goodman and Laurie Metcalf are totally open to the idea of a spinoff, and clearly Sara Gilbert (also an EP on the series) is trying to get one up and running. Since those three make up the main characters of the series (that are not Roseanne), the team seems to have all the makings of a successful spinoff that includes Dan, Jackie, and Darlene.

According to the reports, the Roseanne team will be talking though all of these options by the end of this week, so we can expect a clear yes or no about these spinoff rumors very soon. The only thing that we know for sure is that Roseanne Barr is not going to be involved in whatever new iteration that the show may take, so a title change is definitely going to have to happen.