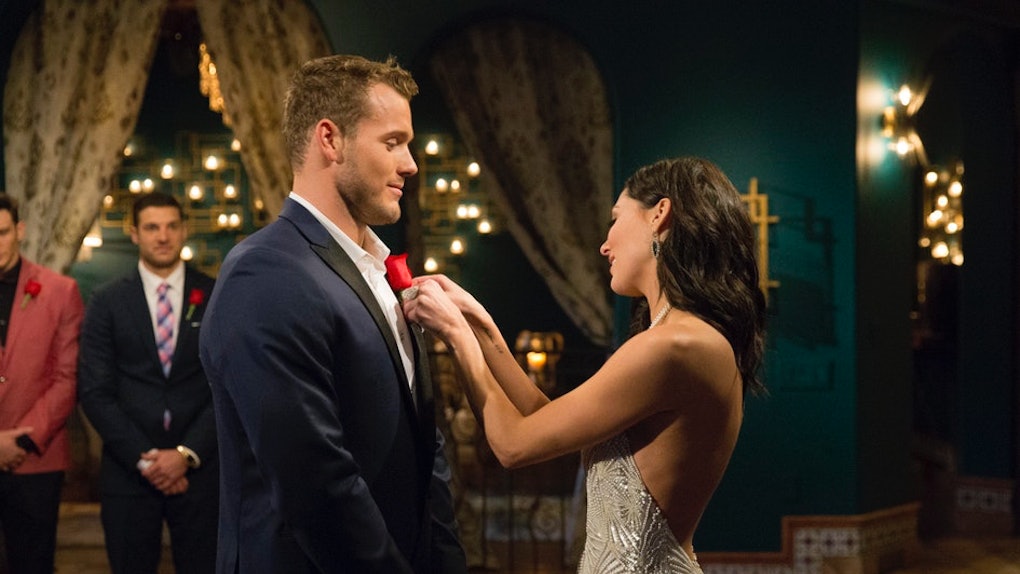 Colton's Reaction When Becca Showed Up On 'Paradise' Was So Raw

So, Becca showed up on Bachelor in Paradise. And that means big trouble for Colton and Tia, who both have unresolved issues from their weird and wonderful (albeit brief) romantic situation that pre-dated Becca's season of The Bachelorette. Naturally, Tia and Becca needed to hash some things out, especially because they both have some history with Colton. Becca's conversation with Tia was actually really revealing. And Colton's recation when Becca showed up on Bachelor In Paradise was really, really raw.

So, to catch you up on the situation: Colton and Tia went on a date during the season premiere. As expected, Tia's been pining after Colton, but Colton has chosen to keep his options open. The fact that Colton didn't even consider clearing up his stance on his relationship with Tia irked lots of people on the show. While Colton was being chided by his fellow bachelors, Tia was waxing poetic about a one-on-one date she had with Colton. The situation was temporarily resolved when Tia moved on with Chris. We'll see how long their happy union lasts, though. Meanwhile, Bachelor in Paradise producers had something else in mind: they brought Becca back into the fold to create some unexpected drama.

This small hitch in the whole Colton-Tia situation brought up lots of uncomfortable feelings. Don't forget, Colton was in love with Becca when Tia basically spoiled their very promising relationship.

Now, on to the conversation between Becca and Tia. They basically talked about Colton, as expected which left Colton really vulnerable. He basically spent the remainder of the episode in tears over the whole situation. Totally unexpected, but hey, it happens.

In any case, Becca and Tia had a heart to heart about their relationships with Colton. Becca basically revealed that she skipped out on a relationship with Colton because he just wasn't the guy for her. And that totally contradicts everything Colton believes about what went down.

It's strange that Becca would show up, especially when Colton's trying to move on. I mean, Becca's already set in terms of romance, so all she's serving to do here is stir up some drama. As for whether the conversation actually accomplished anything, I'd say that not. Becca and Tia kind of left off with the feeling that Colton doesn't know what he wants in a relationship. In the meantime, Colton was a mess and not even sure he wanted to stay on the show.

Anyway, I think the main takeaway here is that Colton is still kind of hopelessly in love with Becca, which leaves Tia in the dust. So, Tia is definitely much better off leaving Colton in her past, especially since he doesn't seem to be 100 percent sure about pursuing a relationship with her. Hopefully. Chris makes Tia happy and Colton finds someone else to set his sights on.

One thing to look forward to next episode, though, is Becca's conversation with Colton. That's definitely going to cause a stir and possibly unsettle Colton even more.