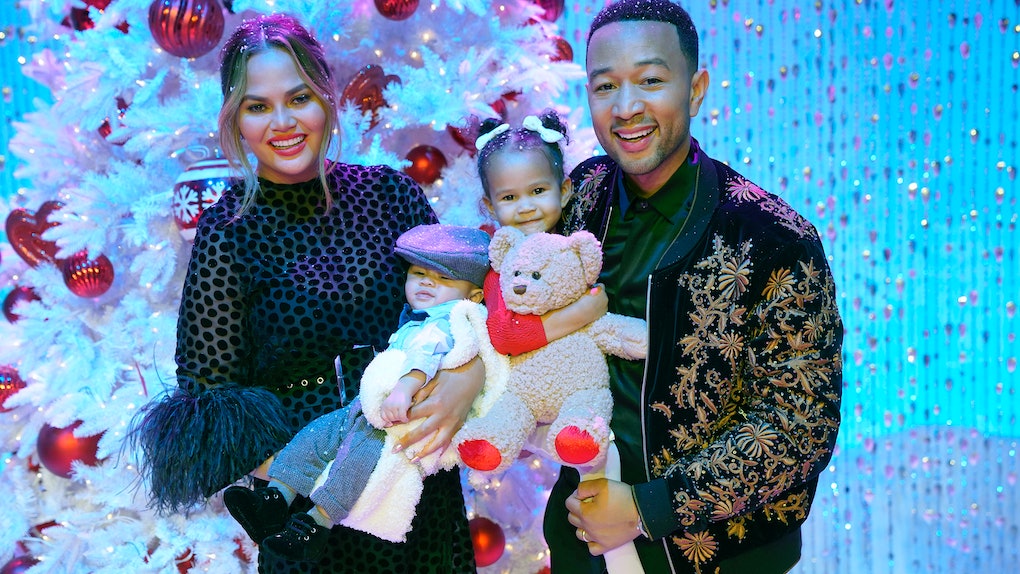 As the daughter of John Legend and Chrissy Teigen, Luna Stephens is already a celeb in her own right. She consistently appears on their social media pages, and, at this point, her sassy ways have become equally as famous as her A-list parents. Now, it looks like she's embracing her star status. The 3-year-old has signed her first autograph, and the monumental moment was caught on tape. Chrissy Teigen's video of Luna signing her first autograph will melt your heart.

It all went down at the launch party for Teigen's new campaign with Quay Australia sunglasses. Sure, the campaign may have been centered around Teigen, but little Luna was featured holding Teigen's hand in a poster at the party. So, it only made sense to make her mark on it.

In Teigen's Twitter video, Luna stamped her name right across her photo, and her mom was so. darn. proud.

"Yesssss, Luna!!" she captioned the video. She also cracked a joke writing: "@quayaustralia she's available for your next campaign." But then again, something tells me that Luna will be landing her own campaigns soon enough.

The sweetest part of all was hearing Legend help Luna spell out the letters for her her first autograph. Seriously, it was kind of the cutest thing ever.

Fans were loving the endearing moment, and excitedly tweeted back at Teigen. "I want an autographed picture of Luna!!" one fan wrote.

"Listen this toddler is already signing autographs photos for us peasants.. she is amazing. We have no choice but to stan for this entire family," another person said.

Some couldn't believe how similar to her mom Luna looked in the mural. So much so, they actually thought the image was of Teigen herself.

Congrats to Luna on this major milestone. Not many 3-year-olds are out here signing autographs, but, then again, not many toddlers are the daughter of Chrissy Teigen and John Legend.

As a bonafide superstar already, something tells me this was the first of many, many autographs Luna will be penning in her lifetime.