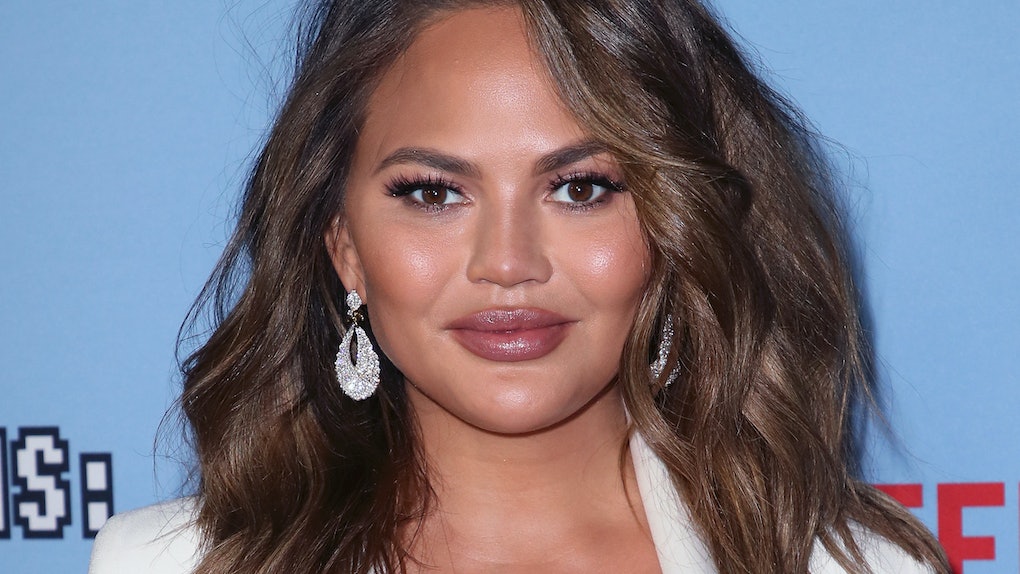 Chrissy Teigen has undoubtedly created a replica of herself in her daughter Luna. Teigen isn't afraid to share her opinion, clap back at trolls, and make the most honest expressions known to man. Remember when Teigen became a whole meme when she ugly-cried after her husband John Legend accepted his "Best Original Song" Golden Globe for the song "Glory" off the soundtrack for Selma. Now, her tiny tot, is following suit. Chrissy Teigen's photo of Luna rolling her eyes is a forever mood.

On Monday, Sept 23. Teigen hopped on social media to do what she does best. Well, second best to clapping back at trolls, and that's sharing candid snaps of her family and personal life. Sigh, I love authenticity.

Anyway, cooking enthusiast took to Instagram to share a totally sweet snap of Luna smiling in a pink and yellow patterned ensemble. "The joy of a new dress! @zimmermann," captioned Teigen. Fans swarmed the comments section with sweet messages like, "I do the same thing when I buy a new dress....", "Omg she's just so adorable," and "It’s a good dress." Indeed, it is. If I was wearing that adorable designer dress, I'd be smiling just as big too. However, it seems as if there was much more to this silly moment than meets the eye.

Teigen decided to give her Twitter Fam the real deal behind Luna's new dress photo. In a two-photo tweet, Teigen uploaded the smiling photo next to a hilarious snap of Luna rolling her eyes as far back as they could go. I seriously wonder what prompted such a response. Did your mom demand a nap sesh, Luna? Did she say you've spent too much money on that Zimmerman dress? Regardless, Luna was clearly doing Luna, and Teigen was there to capture it all.

Teigen hilariously captioned the candid photo, "Posted the first one to Instagram but u guys get the second one because you get the real shit." Lol. Leave it to Chrissy to keep it 100. Teigen's loyal Twitter family was just as enthused about Luna's eye-rolling skills, tweeting back a number of cute responses.

"She really is your daughter," tweeted another.

"My 3 year old son saw this and said 'Oh wow. She’s a sassy princess,'" wrote another. Sassy princess for sure.

"Luna emojis is what the future needs," wrote one fan. I'm down with that.

And, as I mentioned before, Luna is a meme in the making.

But quite honestly, Luna is another Teigen. Just look at this photo the mother of two uploaded to Instagram on Sept. 23. Luna and Teigen both look to be having the best nap of their lives. "You never forget your first nap at granny’s!!" she wrote under the photo. She's got a point. Grandma's house was the best place for cookies and chill.

Aww... this mother-daughter duo kills me and little Luna is only three. Oh, I can't wait to see what kind of antics she gets into as she gets older. I'm sure Chrissy will keep a good record on Twitter.