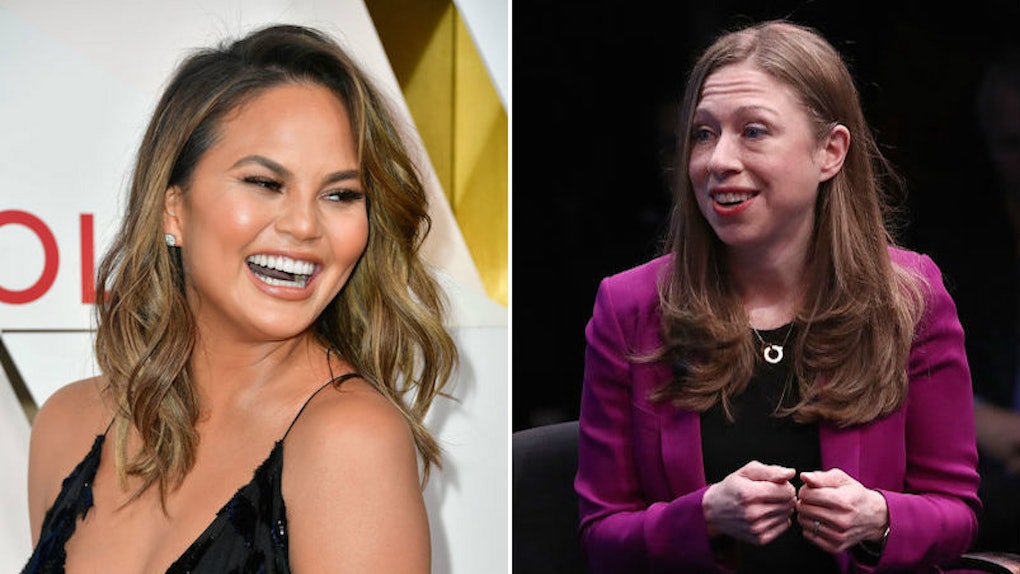 In just the first week of January, a Twitter conversation between Chrissy Teigen and Chelsea Clinton may have already cemented its place as the wildest and most complicated of the year. The conversation began with Teigen — the model and wife to singer John Legend — trying to change the subject from a previous thread she had been sending out related to another verified user unflatteringly talking about the couple's daughter. The exchange then ended with Chelsea Clinton thrown into the mix, wishing The Church of Satan a happy new year.

Along the way, the official account of Hooters — yes, that Hooters — also played a part. Here's how it all went down:

The day before New Year's Eve, Teigen had been tweeting about how a different verified user — whose bio all but says she's a believer in multiple debunked conspiracy theories — was using pictures of Teigen and Legend's daughter, Luna, to suggest another conspiracy.

"Yeah yeah it’s 'just Twitter' but I’m pretty sure this *sick* person is saying we are darksided pizzagate pedophiles who traffic our daughter. Ummmmm this is really scary shit," Teigen tweeted on Dec. 30.

The model would then go on to share further tweets about the matter.

Later, Teigen decided to change the subject, which where the Teigen-Clinton-Hooters-Church of Satan collab begins.

"Anyhow," Teigen said. "I really am not enjoying that shit as the last thing on my timeline soooooooooo hello, normal people. Love you."

That tweet prompted a response from Chelsea Clinton, who is of course the daughter of former presidential candidate Hillary Clinton. The younger Clinton told Teigen that she's experienced similarly unsettling episodes on social media, in which trolls would invoke her daughter's name.

Then came the came the moment at which the conversation really went off the rails. An account with the name "Rogue Hooters Staff" replied to Clinton, "eat sh*t Chelsea."

Eventually, Hooters was drawn into the conversation, and the official account of the restaurant made clear that it had no affiliation with the user that trolled Chelsea Clinton.

The "rogue" account would eventually be suspended by Twitter, which has been trying to ramp up efforts to curtail the trolling and threats that are thrown around on its platform. In case you thought all that was abnormal, it's totally... not, apparently. At least according to Clinton.

Of course, the whole thread wouldn''t be complete without the (actual, real life) Church of Satan waltzing into the convo and exchanging pleasantries with Clinton.

The whole of the conversation was tweeted by a user name Ryan, who aptly called it an iconic exchange.

Between that wild convo between Clinton and Teigen and President Donald Trump prompting people to seriously complain to Twitter about suspending him for threatening nuclear war on social media — because he just had to respond to Kim Jong-un — 2018 is off to a hot start.