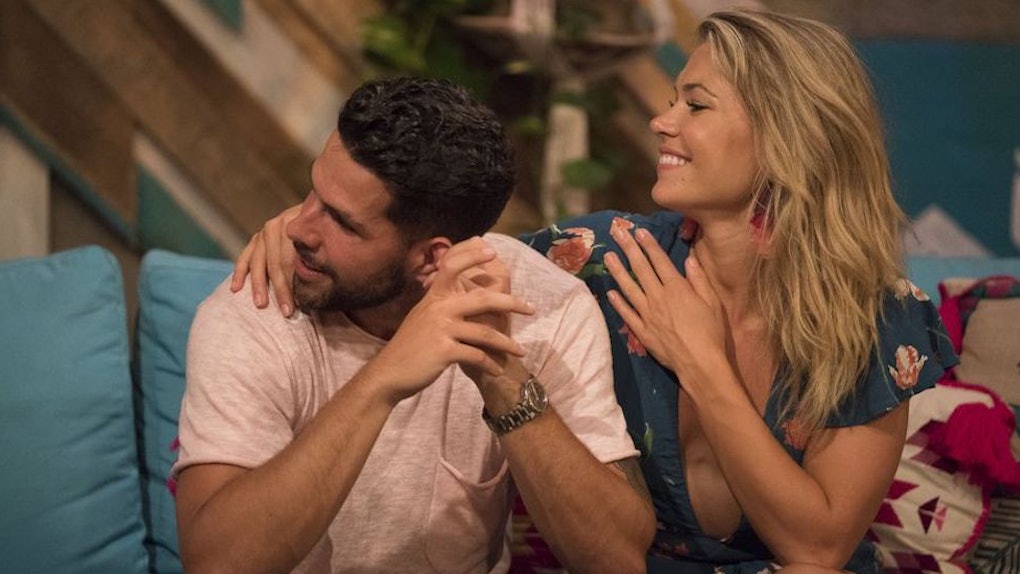 ICYMI, Chris Randone and Krystal Nielson from Season 5 of Bachelor In Paradise tied the knot on Sunday, June 16, 2019, and it was seriously sweet. Their romance might not have started out very conventionally, as they were both hailed the "villains" of their respective seasons of The Bachelorette and The Bachelor, but they certainly got the happily-ever-after part down pat. Now that they're officially husband and wife, a look back at Chris Randone and Krystal Nielson's relationship timeline totally proves that when you know, you know.

As any good Bachelor Nation fan knows, things move quickly on the franchise, so it's not usually a surprise when a couple gets engaged soon after meeting. Randone and Nielson are one such example. Randone, a sales trainer who appeared on Season 14 of The Bachelorette and vied for Becca Kufrin's heart, was totally taken with Nielson, who made it to week six of Season 22 of The Bachelor, with Arie Luyendyk. They dated for a year before saying "I do."

Their time on Bachelor In Paradise may have started with them seeing other people, but after they made it official, it was like they were the only two people in the world. (Or at least, on the beach.) They had somewhat of a whirlwind romance, so let's catch up.

They met just over a year ago.

Believe it or not, Randone and Nielson only recently celebrated the one-year anniversary of their meeting. Speaking exclusively to Us Weekly at the celebration of fellow Bachelor In Paradise alum Ashley Iaconetti's bridal shower on June 5, Nielson revealed she was so happy to have spent a year of her life with Randone.

"Tomorrow is actually the one-year anniversary of when we first met," she told the magazine. "We just realized that today! So it’s been a whirlwind of so much love and bliss and happiness, and sometimes it doesn’t feel real, but at the same time, it’s what I always knew I wanted and deserved, and I just found my person. So life’s blissful."

Awww! That would mean that they met on June 6, 2018, which is likely when the last season of BIP started filming.

It wasn't easy at the beginning.

When Nielson and Randone first met on BIP, it wasn't a magical fairytale right off the bat. At the start of the season, Nielson was into Kevin Wendt (from the Canadian version of The Bachelorette and Bachelor Winter Games), and Randone went on the first date of the season with Tia Booth. Nielson also went on a date with Kenny King before hitting it off with Randone. The following week, Randone gave Nielson his rose. Even after Nielson and Randone started their romance, she also went on a date with Connor Obrochta. It was somewhat of a love triangle, although it didn't last too long.

When they settled more into their relationship, it was clear there was no going back. By episode nine, they had both said "I love you."

At the end of the season, they got engaged.

During the Season 5 finale of BIP, Randone proposed to Nielson, and it was pretty cute. "It hasn't been smooth sailing," he said during the proposal. "It would be unfair to both of us if I left here holding your hand. I want to leave here holding your heart."

Between the proposal and what happened soon after, it became obvious they were serious about each other.

So, what happened next?

They moved in together!

In October 2018, just over a month after the BIP finale aired, Randone and Nielson announced that they were moving in together to a new place in San Diego, California, according to PEOPLE.

"In the words of all my boys back home….Let’s Goooo Babyyyyyy," Randone captioned his Instagram post announcing the happy news. "It’s OFFICIAL we’re APPROVED for our first place together! Excited for this new chapter!"

Their engagement party was beautiful.

In May 2019, Randone and Nielson celebrated their upcoming nuptials with an engagement party, which was 20 times nicer than my actual wedding. Speaking exclusively to E!, Randone even admitted that all their guests were shocked at how nice it was. "Everyone thought it was a surprise wedding," he said. "That's what everyone couldn't stop talking about because it felt like a wedding."

Their actual wedding was an international affair.

They tied the knot at the same place they met.

Nielson and Randone officially tied the knot on Sunday, June 16, 2019. Chris Harrison officiated the wedding, of course. The two were married at the Vidanta Hotel in Puerto Vallarta, according to PEOPLE, and there were plenty of other Bachelor nation alums in attendance, including Ben Higgins and Ashley Iaconetti.

Even though these two got engaged after just a few weeks of dating, they've spent nearly a year together since then. They seem so happy together, and their wedding like it was a lovely expression of their love. Now, they are looking toward the future. "I’ve always dreamed of being a husband and a father," Randone told PEOPLE after their wedding. "And I have the perfect partner by my side."

Aw! Congrats to Nielson and Randone!