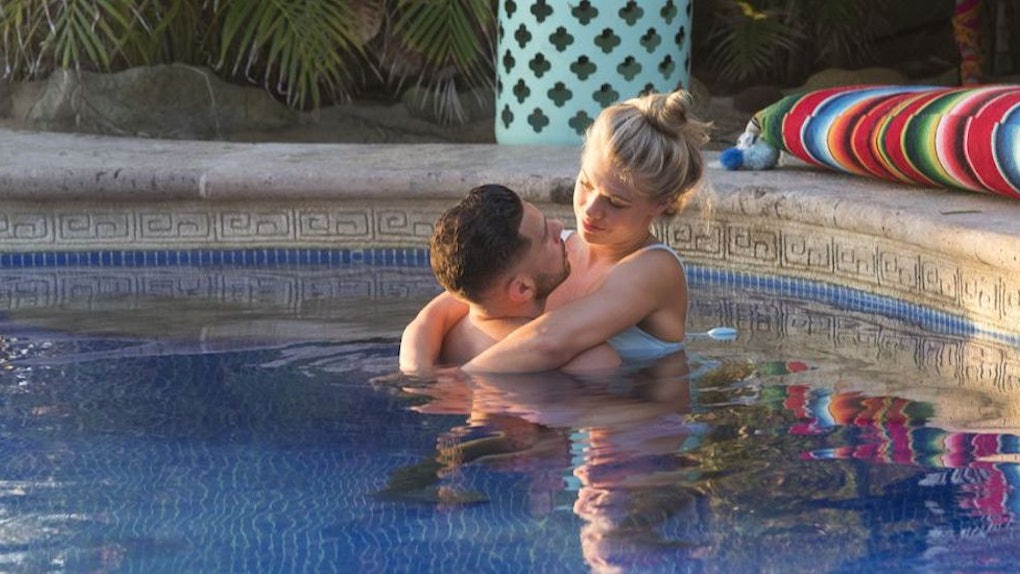 Alright, Bachelor In Paradise fans, let's talk about the one couple that's come out of seemingly nowhere and made everyone turn their heads to the side and say "Um, what?" Yes, I'm talking about Chris Randone and Krystal Nielson. The two "villains" from their own respective seasons of The Bachelorette and The Bachelor ended up getting together on the summer drunk-fest show, and actually seem to be genuinely in love. So, what does Chris & Krystal's body language on Bachelor In Paradise actually mean? Well, according to a body language expert, the two might actually be each other's end game.

Before we dive into this couple's body language, I have to warn you that there are rumored spoilers ahead for the season finale of Bachelor In Paradise. I repeat, do not continue reading if you don't want to know what happens at the end of the season.

OK, still here? Now, according to the expertise of Reality Steve, Chris and Krystal get engaged at the end of Paradise. Yes, these two allegedly end up wanting to be together forever, and strange as it may seem, their body language actually indicates that they have lasting power. Here's what body language expert and author of Persuasion Point Traci Brown has to say.

1. They're both into each other.

According to Brown, Chris and Krystal have the hots for each other, clearly. This happened on the night Chris told Krystal he was in love with her. "See how they're both seem to be smiling?" Brown tells Elite Daily. "She's leading the way a bit with her hand around the back of his head."

During this rose ceremony, Chris and Krystal seemed totally in love, and they didn't shy away from showing it. They were definitely feeling it, and that kiss was giving off some serious fireworks. "She's got her hand around his neck again, and he's really leaning in, see how she's almost leaning back?" Brown explains that the way they're holding each other could mean that they're both here for the right reasons. "They're really into each other."

3. They seem to be pretty deeply connected.

Even though Chris and Krystal met only short while ago, they definitely seem to be on the same page. After all, they've been spending every day together for a few weeks now, and Brown can tell. "They're in step on the beach — so that means they're on the same page, tight and energetically connected," she says. These two Bachelor franchise "villains" might have found their match in one another.

4. It's more than just a physical attraction.

The pair really let their feelings show in the pool, and Brown says that the way they're holding each other in the water might mean more than that they're simply attracted to each other. "In the pool he's put her above him and is looking up into her eyes, so he may have her up on a pedestal," Brown says. "And it's really difficult to look at someone that closely if you're not connected very deeply and have good intimacy."

Clearly, these two are actually pretty legit, so a potential engagement might not be too surprising. Who knows? Are they the next Carly and Evan? The next Jade and Tanner? Only time will tell. For now, let's just hope they decide to televise their wedding. I smell a TV special!