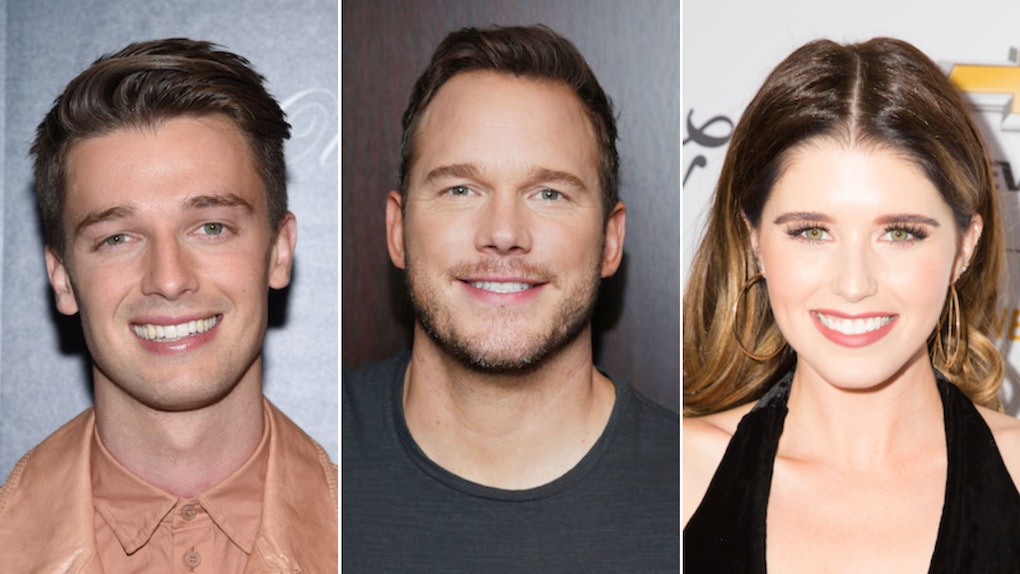 Chris Pratt & Patrick Schwarzenegger Went To A Basketball Game Together, Which Is Big

If you haven't heard by now, let me be the one to tell you. Chris Pratt is dating broadcast journalist Katherine Schwarzenegger, aka Arnold Schwarzenegger's daughter, and it is serious. Like, really serious. Like, he's hanging out with her family-serious. In fact, Chris Pratt and Patrick Schwarzenegger went to a basketball game together without Patrick's sis Katherine, so yeah. Things are going pretty well. The two men attended the Los Angeles Clippers vs. Toronto Raptors game on Tuesday, Dec. 11, and were happy to include bits and pieces of their night out on social media. You know things are the real deal when you make it Instagram official with your significant other's brother, ya feel me?

Based on their interactions on Pratt's stories, it looks like this isn't the first time they've hung out one-on-one. Both Pratt and Patrick looked totally at ease sitting courtside together, and even posted the same photo. Pratt shared a picture of Patrick sitting behind a basketball player who was leaning over precariously close to his face with the caption, "Great floor seats at Staples Center last night. So close you could smell the action!" Patrick also posted the picture on his own Instagram story with the text, "Floor seats are dope."

Based on reports, Pratt has actually spent quite a bit of time with Katherine's family. Us Weekly reports Pratt and Katherine went to dinner with her famous mom, Maria Shriver, and even brought along Pratt's son, Jack, whom he co-parents with his ex-wife, Anna Faris. Additionally, the couple hung out with the entire Schwarzenegger family in Los Angeles around Thanksgiving, when they watched Katherine's siblings play football. Obviously, some fans might be wondering where he stands with dad Arnold, and rest assured Pratt has him covered, too. He and Katherine went out to breakfast with Arnold and his girlfriend Heather Milligan in November, so it's all gravy there.

Clearly, Pratt's putting in the time. To be fair, it sounds like the Schwarzeneggers have made it easy for him. According to Us, Katherine's mom Shriver was actually the one to set her daughter up with the Guardians of the Galaxy star after she noticed they're both avid churchgoers. Getting your significant other's mother's approval that early has to make things a little smoother, don't ya think?

According to some sources, Pratt is all in and even considering taking the next big step very soon. Reportedly, he's turned down work opportunities so he can spend more time with Katherine and "they’ll be engaged soon," according to one insider. Another source told Entertainment Tonight, "The moment Chris and Katherine started dating, everything fell into place and they seemed inseparable. They just love each other's company and have so much in common."

According to this source, Pratt is actually taking great care to balance his new relationship, co-parenting his son with Faris, and work. "Chris and Anna are going to continue to communicate, and Chris and Katherine seem very much in love. They are all adults and are truly a good group of people," they said.

I'd really love to work in an "I'll be back" joke here, but it sounds like Pratt isn't going anywhere.