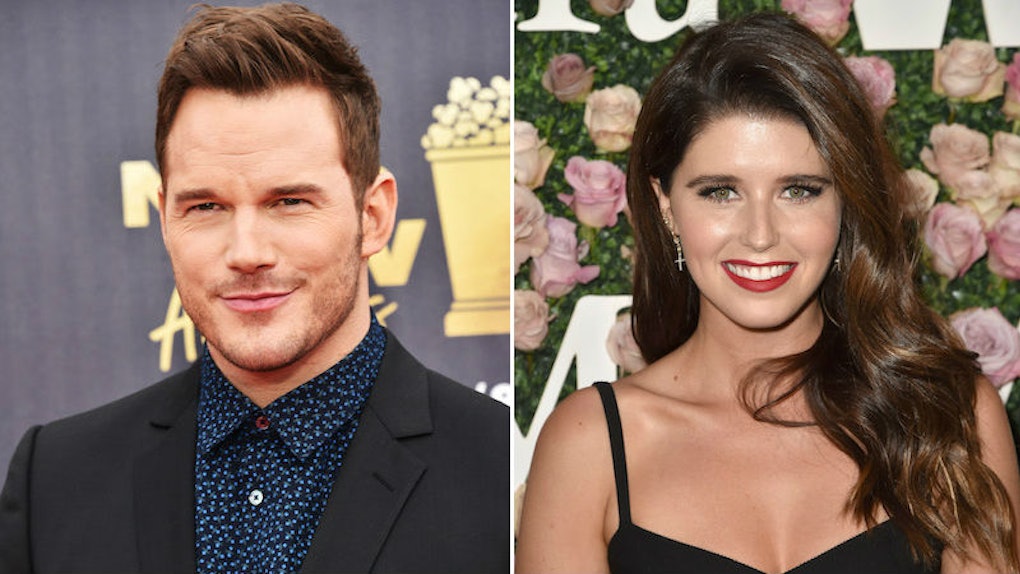 Spoiler alert: I miss the days when Chris Pratt and Anna Faris were still a couple. I know that it's been almost exactly one year since they announced their separation, but their split hit me hard, so it's taking me a little more time than usual to get over it. Fortunately for the actual ex-couple, it seems they are handling it well (better than myself, some might say). And truly, as long as they are happy, then I'm happy for them. And now, this Chris Pratt and Katherine Schwarzenegger relationship update will maybe make you start believing in true love again. I'm still not sold on the idea, TBH, but for Chris Pratt, I'll certainly try.

According to Entertainment Tonight, Chris Pratt and Katherine Schwarzenegger, who is the daughter of Arnold Schwarzenegger and Maria Shriver, have been spotted out together and things are getting pretty "serious" for the new couple. A source told the site,

[They] went from casually dating to spending much more time together. Chris and Katherine have introduced one another to their family and friends, and have been almost inseparable when they are free.

Elite Daily has reached out to both Pratt and Schwarzenegger's teams for comment but did not hear back by the time of publication.

So wait, let's step back: they've been introduced to each of their respective families? That is no joke, you guys, especially because Chris Pratt has a son, Jack, whom he shares with Faris. Pratt was actually spotted smooching Schwarzenegger right in front of Jack on Sunday, July 29, after attending church together. So it looks like the source is right when they say Schwarzenegger has been introduced to Jack and has "spent quality time" with the 5-year-old.

"That was a big step for Chris," the source told the publication. "Until he knew it was more than just casual, he wasn't introducing Jack to anyone. Chris and Katherine are very happy together."

Well, if Chris is happy, then I guess I, too, am happy.

Realllly struggling to make it through this post without breaking down thinking about what could have been, you guys.

Pratt and Schwarzenegger were first spotted together in June having a picnic together, causing the gossip mill to start speculating as to whether or not they were a couple. According to People, the two were seen "smiling and laughing" together:

The duo dressed casually as they shared sandwiches, potato chips and apples on a park bench in Santa Barbara, California on Sunday. Sitting across from one another, they were seen smiling and laughing throughout the date.

While it seemed that things were clearly very casual between Pratt and Schwarzenegger then, it looks like their relationship is moving to the next level, and that the world didn't even know that the two have been going out on a ton of dates right under our noses this whole time. A source told E! News that Pratt and Schwarzenegger "have been on multiple low key dates and have been talking consistently for the last two months or so."

They continued, "They both really like each other... Chris is smitten by Katherine and is super happy about how it's going so far." Elite Daily reached out to Pratt and Schwarzenegger's teams about the report, but did not hear back by the time of publication.

I guess, at this point, I should stop hoping for things to work out between Chris and Anna, and perhaps start rooting for Chris and Katherine instead. This is it, you guys. This is goodbye.

So long, you two. We'll allow you both to move on, but we'll never, ever forget.