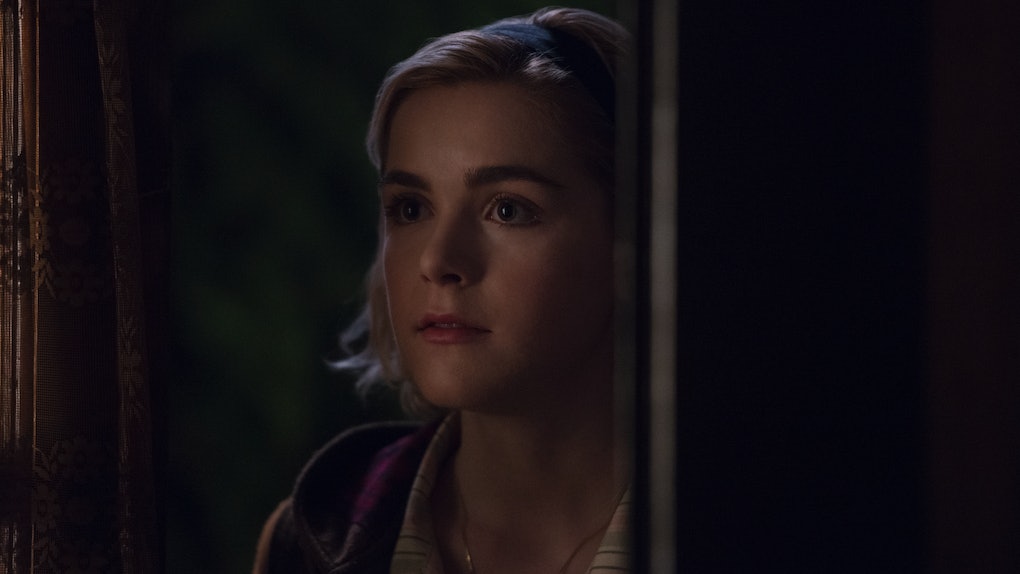 'Chilling Adventures Of Sabrina' Season 2 Will Be "Sexier," According To The Director

We won't have to wait too long for more Sabrina Spellman after the Chilling Adventures of Sabrina holiday special airs this week, as Season 2 of the witchy teen drama is slated to drop on Netflix on April 5. Our girl 'Brina debuted an icy blonde look and a new attachment to the Weird Sisters in the season finale, and according to the showrunner, these slight changes will usher in a new tone in future episodes. Creator Roberto Aguirre-Sacasa says that Chilling Adventures of Sabrina Season 2 will be "sexier" than the first, and what with Sabrina embracing her dark side in Season 1, his claim is totally believable.

Speaking to Entertainment Weekly about the upcoming season, showrunner Aguirre-Sacasa teased how the episodes will differ from the first season. He told the magazine:

The last few episodes of Season 1 definitely foreshadowed the show's more adult turn. Soon after Harvey (Ross Lynch) was forced to kill his resurrected brother, Sabrina had to sign the Book of the Beast in order to save Greendale from the Red Angel of Death. After Sabrina chose to distance herself from her mortal friends in favor of exploring her magical side, Ms. Wardwell (Michelle Gomez) revealed her true identity as Madam Satan and her mission to groom Sabrina for taking her spot. Not quite the sunny story we saw in Sabrina the Teenage Witch, huh?

With the Christmas special expected to connect the two seasons, Aguirre-Sacasa also explained how the titular character will develop between these phases. He said:

Fitting with the promise for a sexier Season 2, Aguirre-Sacasa also implied that Sabrina's friendship with warlock Nicholas Scratch (Gavin Leatherwood) may develop into something more. Although Sabrina and Harvey are seemingly on a break by the end of Season 1, the teen witch's conflicting feelings for both Harvey and Nicholas could complicate her life soon. Aguirre-Sacasa said, "I think that with these kinds of TV shows or shows for young people, it never hurts to have a love triangle. It never hurts."

Between Sabrina's teen romances and Ms. Wardwell's tendency to literally devour men, Chilling Adventures of Sabrina's second season definitely seems pegged to rival some of the sexier happenings in Greendale's neighbor Riverdale. Will Ben Button reappear to explain exactly what Ms. Wardwell did to him after he delivered her pizza?