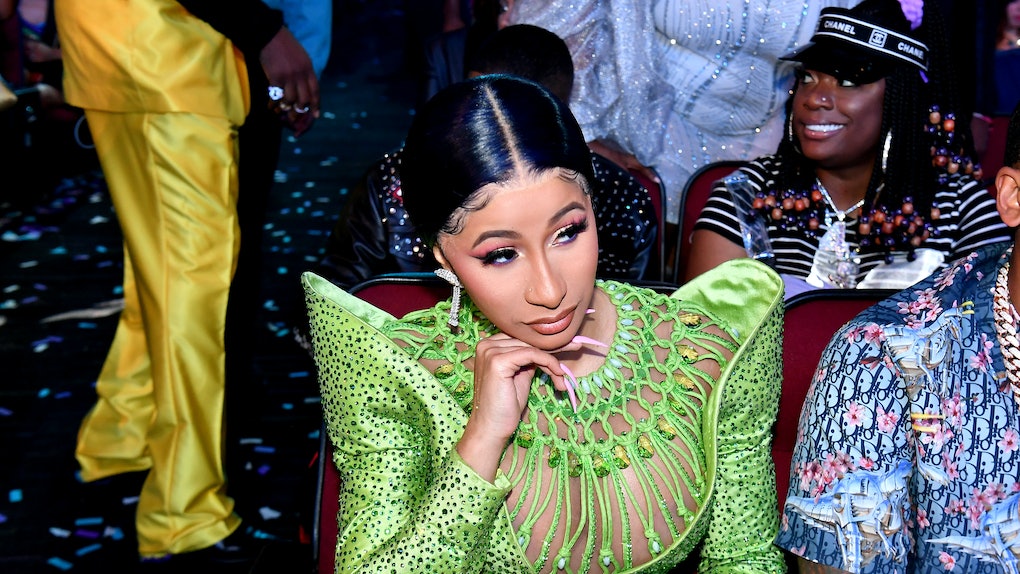 Everybody's favorite rap kween and songwriting goddess, Cardi B, is known for her wild (yet totally amazing) stage presence. And her performance at Wireless Festival in the UK was no exception — the "Bodak Yellow" singer literally tossed her wig into the crowd after showing off some seriously wild dance moves. But now, she's on a quest to get her wig back. So, if you haven't already seen Cardi B's tweet about losing her wig at Wireless Festival, it's a truly hilarious plea.

If you live in the UK, you're most likely familiar with Wireless Festival. According to the Evening Standard, it's an annual three-day affair that takes place in London's Finsbury Park. Every year, it features a wide variety of popular artists, so it should come as no surprise that Cardi B was a crucial name on the festival lineup.

During her July 5 performance, Cardi B was slaying all of her top hits. And, as per usual, she was getting down and dirty. At one point, she rolled over onto her back, causing her wig to go slightly askew. But instead of taking the time to fix it, she stood up, and proceeded to throw her wig into the crowd. Fast forward to about 21 seconds into the clip to see it all for yourself, below.

Anyway, everyone who's worn a wig is painfully aware of the fact that a solid hairpiece is pricey and difficult to find. So, it should come as no surprise that Cardi desperately wants her wig back. She posted the below tweet a few hours after her set, with the slightly desperate (yet totally understandable) caption, "I GOT CARRIED AWAY .......I want my wig back:/ Dm me." LOL.

No shame, Cardi, no shame. We all feel you on this one. Also, if you ended up snagging the wig, please DM her ASAP. This is actually dire.

Even though the loss of her wig may have been a major disappointment for her, guests were tremendously excited about the fact that she ended up inviting a surprise guest to the stage: Lil Nas X. That's right — the "Old Town Road" singer appeared out of nowhere, and sang his country-trap hit, according to NME. The footage of it all is pretty epic, if you haven't already watched it a hundred times over.

And, being the gracious hero she is, Cardi publicly thanked Lil Nas X for his awesome guest performance. The two icons should definitely team up more often, if you ask me, because it seems as though they seriously brought the house down.

My utmost condolences go out to Cardi B, for the disappearance of her beloved wig. Right now, it seems like she's on the right track in terms of finding who snagged it, in hopes to eventually get it back. Of course, people are already trying to sell what they say are pieces of the wig she threw, but I guess there's no way to know for sure. Maybe she'll be more cautious about her wig next time, but — hopefully — she keeps doing her wild signature moves. They are truly what she does best.

More like this
BTS' "Butter" Concept Photos Have ARMYS Searching For Clues
By Michele Mendez and Cianna Garrison
These Singers Were Accused Of Copying Other Artists In Their Music Videos
By Brandy Robidoux
Is Olivia Rodrigo's "Good 4 U" About Joshua Bassett? Fans Are Convinced
By Michele Mendez
Stay up to date