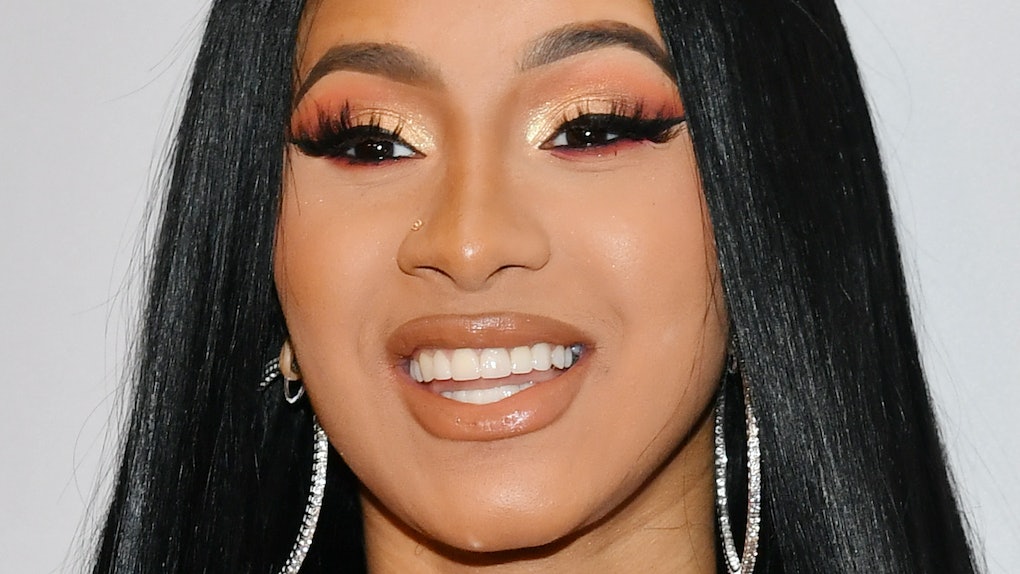 You guys! Cardi B's precious baby Kulture almost had a completely different name. Trust me when I say this: You'd never be able to guess Cardi B's original name for Kulture, even if I gave you a hint. Like, it was family-related. So, I'll just tell you.

Family means a whole lot to Cardi B. If you recall, her daughter Kulture Kiari Cephus was partially named after her dad, Offset, whose government name is Kiari Kendrell Cephus. As for her daughter's first name, the Bronx-based rapper explained a little via a tweet on July 11, 2018. "Kulture anything else woulda been basic Okrrrrr," she wrote. True that. We should expect nothing less from Cardi B whose name is basically synonymous with extra.

On Sept. 10, Cardi B took to Twitter to share an interesting tidbit about her daughter's name and the fact that it was almost something completely different, but still very sentimental. You see, Cardi B was close to naming her 1-year-old after her sister, Hennessy Carolina. "Fun fact :Always wanted a daughter and I always used to say imma name her HennyLynn," she wrote. "It’s a cute mix of my sisters name but then I started calling my sister HennyLynn then it became one of the nicknames I gave my sister so it woulda been weird naming my daughter that." Aww... HennyLynn is super cute and I'm totally adding it to my list of "H" baby names next to Halle and Hanna.

Honestly, HennyLynn would've been a very sweet homage to her little sis. However, Cardi B previously explained the final decision was not up to her, but up to her then-fiancé Offset. In April 2018, Cardi B appeared on The Ellen Show to talk all things baby-related. When asked about whether she and Offset had considered any names, she replied, "My dude named the baby." At the time, she had not revealed her baby's name, but made sure to let the crowd know she was totally here for it. "I really like the name," she said, before adding, "I’m gonna let him say the name since he named the baby."

Interestingly enough, both rappers unveiled their bundle of joy's name on their respective Instagram accounts under photos of a very pregnant Cardi B on July 11, 2018. "Kulture Kiari Cephus 07/10/18," wrote Cardi B under her post. Opting for a more stylized look, Offset captioned his baby announcement with spaced-out letters: "K U L T U R E 7/10/18K I A R IC E P H U S.

The meaning behind Kulture Kiari Cephus' first name is still a mystery, though many fans think it is another tribute to Offset, his family and his career. Let me break it down for you. Offset is a part of the hip-hop trio Migos. Migos is comprised of Offset, his cousin Quavo, and Quavo's nephew Takeoff, and in 2017 the group released an album called Culture. Then, they released Culture II in 2018. So, why not make your kid "Culture III," aka Kulture?!

Offset also has three children from previous relationships. Those kids are named Jordan, Kody, and Kalea. Seeing as he chose Kulture's name, it would make total sense for the rapper to change any name beginning with a hard "C' to a "K" for kontinuity's sake. Regardless, it's pretty adorable to learn that whatever Cardi B and Offset planned to name their daughter, it was always going to honor family.