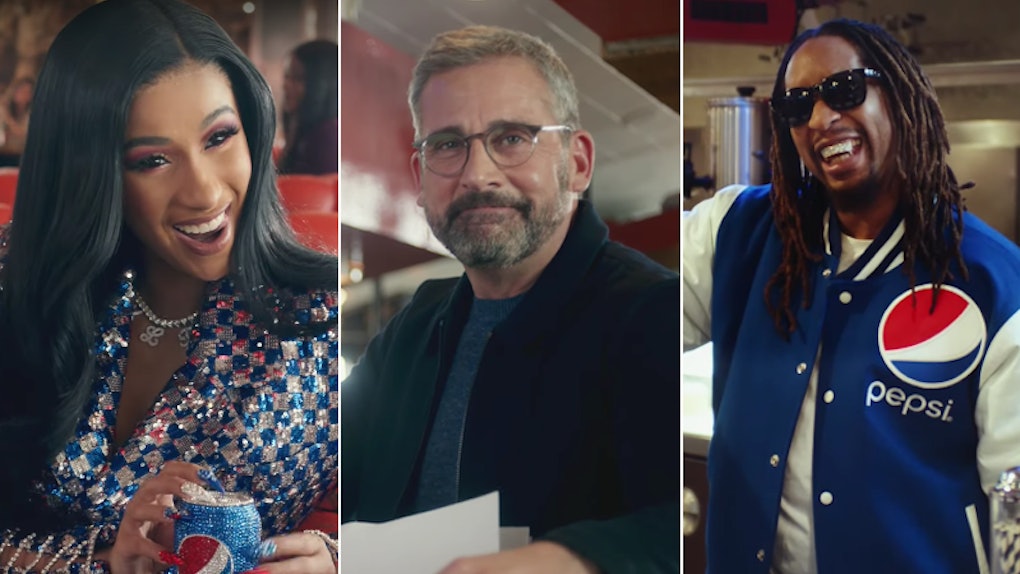 "Hello? Yes. I would like to order one Steve Carell, one Cardi B, and one Lil Jon on the side. Can you make that the Super Bowl package? Extra Pepsi. Thank you..." is basically the conversation I had with the universe. And boy, did it deliver. Cardi B, Steve Carell, and Lil Jon's 2019 Super Bowl commercial with Pepsi looks seriously, seriously epic. I mean, first of all — what a combination of celebrities! Second, when you see the short (like, really, really short) teasers, you'll already die laughing even though you don't know why. That's the magic of Cardi B, Steve Carell, and Lil Jon.

It's been revealed Carell will be the star of the campaign and Cardi B and Lil John will make short cameos. All three teaser videos take place in what appears to be the same diner, with Carell saddled up to the bar, Cardi B in a booth, and Lil John behind the counter. Carell is the only one with real dialogue and his promotion runs a total of 27 seconds. Cardi B and Lil John only get 5 and 17 seconds, respectively.

Carell's video is called "Steve Carell's Decision" which appears to be referring to him committing to the commercial or not. In the clip, Carell nurses a Pepsi can at the bar while he holds a script. He opens with the dialogue, "Pepsi Super Bowl spot." After reading for a few moments, the famous Office actor cracks up laughing before delivering his final line straight to camera. "We'll see," he says.

God, I love this man.

Cardi is up next, and her teaser is aptly titled, "Cardi B's Diamond Can." In her clip, she enthusiastically taps a bedazzled Pepsi can with matching bedazzled nail polish while smiling at an unidentified person sitting across from her. In the background, a man at the bar snaps a photo of her.

The whole thing is literally 5 seconds long and ends with her famous catchphrase, "Okuuur!"

Last but not least is Lil John. While I personally may have outgrown his "OKAY!" years ago, fans are obviously not done with him yet. In his teaser, Lil John stands behind the counter using a fountain stream to fill up a seemingly bottomless cup of Pepsi. He stares straight at the camera in his iconic sunnies and ends his video with his signature call.

Obviously, this leaves fans asking questions. Do the three celebrities interact in the final commercial? Are they all in the diner at the same time? Who's idea was this, anyway? What does Kendall Jenner think?

To find out, you'll simply have to tune in to the 2019 Super Bowl LIII where the New England Patriots will take on the Los Angeles Rams. Kick off is at 6:30 p.m. EST on Sunday, Feb. 3, though it's not clear when the famous Pepsi commercial will air. You'll just have to keep your eyes and ears (mostly ears) out for Cardi B's whistle, because you're not going to want to miss this.

More like this
Prince Philip, The Duke of Edinburgh, Has Died At The Age Of 99
By Noelle Devoe
Here's Why EXO's BAEKHYUN, CHANGMO, & Raiden's "Runner" Is The Perfect T1 Theme Song – EXCLUSIVE
By Michele Mendez
I Tried Singing While Running Like Miley Cyrus & OMG, My Lungs
By Rachel Varina
Stay up to date