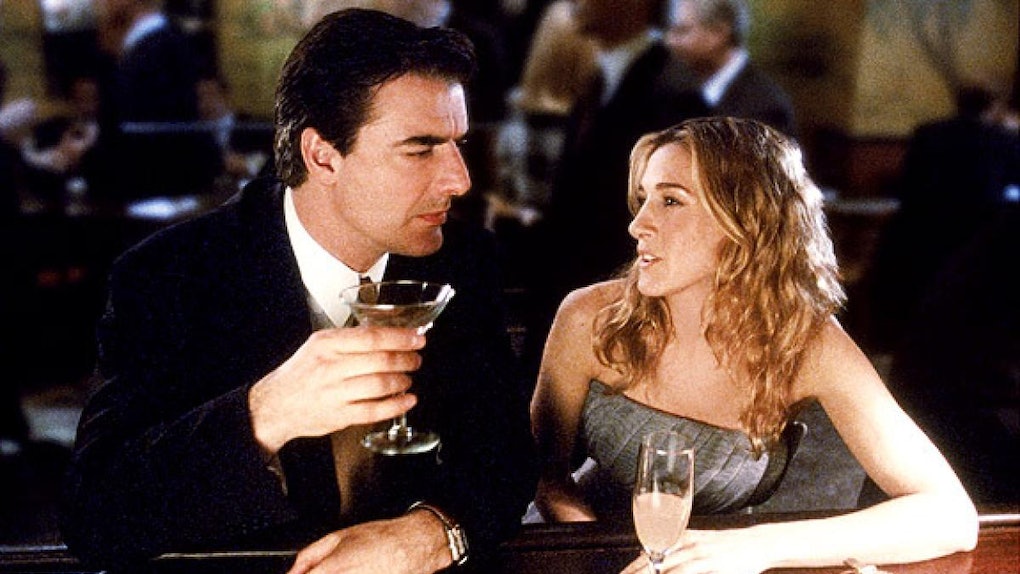 I discovered Sex and the City for the first time when I was 16. The show felt electric to me, a girl in the suburbs who dreamed of moving to New York to be a writer and go on fancy dates with sophisticated suitors and gossip about it all with my friends at our regular brunch spot. Ten years later, I've done just that — and I finally had the opportunity to ask the show's creator, Candace Bushnell, why dating is harder now than it was in the Sex and the City years. Because honestly, the show didn't prepare me for how monotonous and disappointing dating can sometimes be.

Like Carrie Bradshaw, I write about dating, I've lived on the Upper East Side with too many shoes, and I feel as if I have personally dated half of Manhattan and a third of Brooklyn. While I'm in a great relationship now, I spent years wondering how the Sex and the City women wound up on swanky dates with interesting, handsome, absurdly suave men every week, while I, well... drank Four Loko and hooked up with my dorm neighbor whose breath smelled like Velveeta. And got ghosted by the very cute lead singer of a band with a man bun. And got dumped in a grocery store. I knew it was just bad luck, but still, I couldn't help but wonder: Where was my Mr. Big?

'Is There Still Sex in the City?' by Candace Bushnell
$26
|
Amazon

Upon the release of Bushnell's ninth book, Is There Still Sex in the City?, in August, I spoke to her about why dating in real life seems harder and less glamorous than it did on her iconic show, which ran for six seasons from 1998 to 2004. Before our interview, I wondered if she'd remind me that SATC is a TV series — of course it's polished and perfect, right? But once the conversation began to flow, she pointed to a tougher truth.

"I think every generation feels like dating is bad, but you know, being in your 20s [now] and being on Tinder seems kind of like the worst," Bushnell tells Elite Daily. "It's this illusion that you're dating and you're doing something when really you're just looking at pictures of people."

She laments how dating apps have changed dating culture. "Every situation can just be a throw-away situation because you could always go back to the app and look for somebody else," she says. (While that may be true, dating apps often do work — 39% of straight couples and 65% of same-sex couples who met in 2017 met online, according to a 2019 study.) "Most people don't seem to be that good at getting an actual date. Some people do get a meetup, but it seems to be super complicated... and some people get really stuck on first dates, and they just don't have the skills to have a relationship."

Bushnell was inspired to write Is There Still Sex in the City? after her divorce, when an editor at Cosmopolitan asked her to test out Tinder. During her experiment, she spoke to a group of women in their 20s and 30s about their experiences on dating apps, and she was appalled to find how low their standards were. They praised men who were simply baseline-level nice — in other words, men who weren't particularly kind or charming or romantic, but at least they weren't serial killers. Ultimately, Bushnell found that (spoiler alert) she and her Tinder date, who seemed initially promising, didn't end up with a happily-ever-after ending. So, I had to ask: Are women's standards too low? Or are men putting in less effort than they used to?

"When I was writing Sex and the City, women would complain and say, 'We can't meet any great 30-something, single guys, [and] the answer from society was, 'Well, your standards are too high. Lower your standards.' Which is ridiculous. And then, of course, with Tinder, you know the standards can't really go much lower," Bushnell says. "It feels like women have a hard time finding — I mean, this is a weird, weird word — 'quality' men who they want to be with. I think that apps can bring out the less attractive side of people. And it feels like men are more blatantly disrespectful [on apps]. Men have expressed this sort of disdain for women in other ways, but now it's just right in your face. I mean, the reality is people feel like everyone lies on dating apps. So, you kind of start off with a lie. And that's really not great for relationships." Regardless of which genders you date, you might find that your experience on dating apps can be disappointing or frustrating, and that's a bummer.

Despite her dismal view of dating in 2019, Bushnell says all is not lost. She believes that if Carrie were single today, she'd be sliding into Mr. Big's DMs and flirting up a storm there. She likens dating to self-discovery, noting that you learn valuable information about yourself and build better interpersonal skills by going out with a variety of people. She also envisions a future in which people find love with different people throughout their lives, musing, "It might be something where you've got a partner for 10 years, and you have a kid, and then you're on your own for a bit, and you meet somebody else."

Nobody ever said dating would be easy, but I have hope. When, inspired by Bushnell's book title, I polled my Instagram followers to ask if there's still sex in the city, more than three-quarters of them voted a resounding yes. Just because you're drinking White Claws instead of cosmos and swiping on Tinder instead of strutting in Manolos doesn't rule out a great, romantic love story for you, too — just don't expect it to look exactly like what you see on TV.