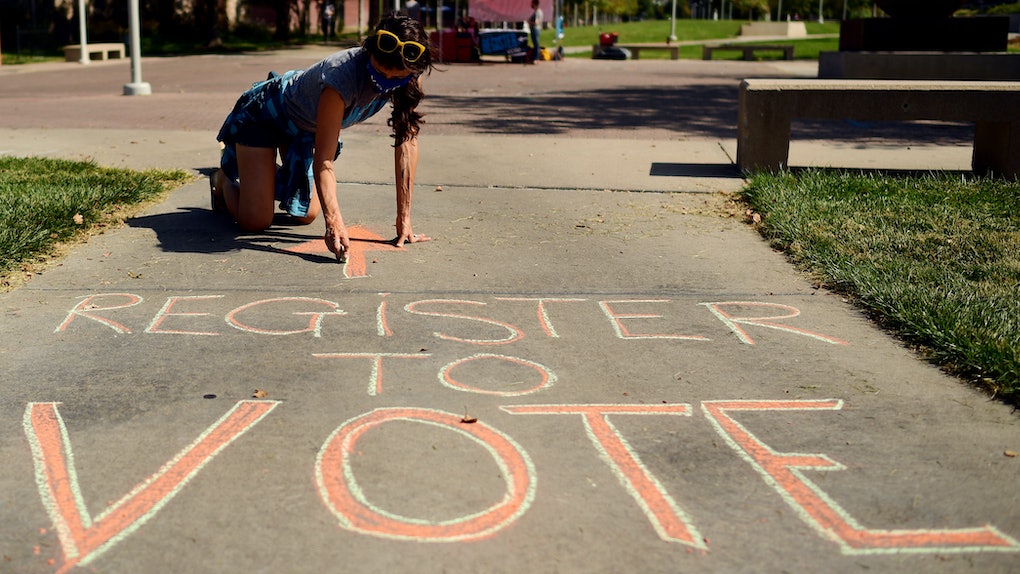 Can You Vote In The State Where You Attend College? Here's What To Know

Election Day is less than a month away, and as of Oct. 9, early voting has already begun in 17 states. Voting is more important now than ever, and it's key you know your rights and how you can make your voice heard. If you’ll be away at school on Nov. 3, here’s what you should know about if you can vote in the state where you attend college.

According to Best Colleges, college students can vote in the state where they're attending college only if they're registered in that state. However, if you go to school out of state, then you'll have to choose whether to be registered in your home state or college state, because you can't be registered in both states, per Vote.org.

Once you decide which state you want to vote in, decide how you'll vote. Some states don’t have absentee voting, so make sure you check your state’s rules. If you register in your school's state, check if you can vote early in-person or by requesting an absentee ballot. For some states, the deadline to register to vote may have already passed. However, the deadline to send in your absentee ballots gives you more wiggle room. Absentee ballot deadlines vary by state, but most states require the ballot be post marked and/or received by Election Day. If you're in a swing state, absentee ballots are counted as many as 14 days after election day. But it's always best to get your ballot in as soon as possible.

Despite the current controversy-laden political climate, the one good side to all of the drama is that it has opened many people's eyes to the importance of this constitutional right, because it wasn't always the case. However, millennials generally have had low voter turnout — less than half of millennials voted in the 2016 election, per NPR — and while the U.S. Census Bureau reports that turnout in voters age 18-19 increased from 20% in 2014 to 36% in 2018, that means over 60% of young voters didn’t vote in the 2018 midterm election. The influence young voices can have on politics today is unparalleled, and it's important to remember that voting in the November general elections is everyone's way of stepping forward and doing what they see is best for their country.

No matter who or where you are, your vote counts. Not sure if you're registered? Here's what to do. And then, get out there and cast that ballot!

This article was originally published on Oct. 13, 2018