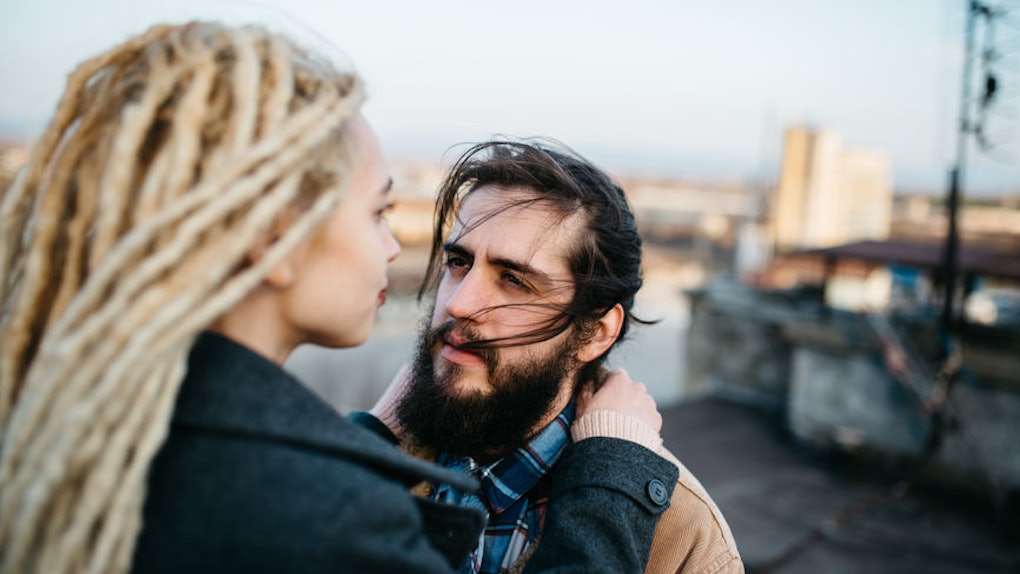 Can You Stop Being Sexually Attracted To Someone? Here's What Experts Say

There's nothing like that first spark of chemistry, when you see someone from across the room and your body shudders. It's almost as if some sort of magic is in the air drawing you toward them. You immediately know that you need to talk to them, even if it's about something as silly as their drink of choice or the book they're reading. This is a sign of sexual attraction, as is the constant desire to want to jump your partner's bones every time you see them. And while at times this sensation can seem unbreakable, is it really? Can you stop being sexually attracted to someone?

The sexual attraction between two people can begin almost immediately. It's that very first moment that you see them in a certain light. Your hormones and brain chemistry start working overtime, and you find yourself inexplicably drawn to them. "It's the thing that would make you walk up to someone at a bar," Brit Burr, editor at large and writer for Psych N Sex, tells Elite Daily.

For all you visual learners out there, think of the domino effect. The fall of one domino results in each one after that to fall, too. Burr explains that sexual attraction, behavioral attraction, and psychological attraction are kind of like dominoes. When you find yourself sexually attracted to someone, you begin to observe how they act. If you find yourself liking their behavior, and the things that they do, you might begin to develop feelings for them. Once your feelings grow, the next thing you know, you could be emotionally invested! How did that happen? Well, it all began with the first "domino," sexual attraction.

Similarly, Burr explains that the dominoes can fall the other way, too. Think about your final domino. If you set them all back up, but you knock the last one down first (which for our purposes is going to be emotional attraction), then once again, the others will follow. Once emotional attraction falls, then comes behavioral attraction, and finally, the sexual attraction you once felt for someone can fall, too.

Sexologist Carol Queen tells Elite Daily that the way someone treats you can indeed affect how sexually attracted you are to them. "It’s possible for a partner to 'step over the line' emotionally and treat you in a way that is such a turn-off, it can be literal," she says.

If you feel like your sexual attraction to your boo is dwindling, but your emotional and behavioral attraction is still there, fret not. There are still ways to make your relationship work — it just takes a little mindfulness.

"It's certainly doable ... it's hard to say objectively because some people are just very physical creatures, so without a strong physical side of a relationship, it can't work for them," Burr says. "Whereas, other people can totally have an emotional relationship with a very small component of physicality and be completely content with that."

When asked if there's a way for a couple to work on maintaining their sexual attraction, Queen says there is, but that it has to come from both parties.

"Both partners have to want to keep the spark alive and treat each other well, not get into a rut, not take each other for granted," she explains.

"Love/romance and sexual desire are often treated in our culture as though they are the same — but that’s a myth. It’s wonderful when they happen together — but they don’t always, or not very strongly," Queen says. "And it might mean something very different to find a good husband/wife, good father/mother for our child, or a good 'person I’d love to grow old with' — especially if there are cultural pressures on us to get married or partnered up or give the parents a grandchild — rather than a good lover."

I'll be the first to attest to a relationship where the passion isn't as consistent as it used to be. My boyfriend and I used to be incapable of lying in bed together for more than an hour without jumping each other's bones. Now, we can lie in bed together for several nights in a row without having sex. Don't get me wrong — when we do have sex, it's incredibly passionate. But it doesn't happen as often as it did in the beginning, which is totally normal. It doesn't mean your relationship is doomed. If that were the case, then nobody would be in a relationship at all!

If you feel like your sexual attraction to someone may be slacking a little, it's OK. I promise it doesn't mean your relationship is failing. You know how people always say "communication is key" and "love conquers all"? I wholeheartedly believe both those things. If you think your sexual attraction might be headed south (or any of the forms of attraction), talk to you partner. It may not be the greatest conversation the two of you have ever had, but it'll help them see where your head is at. Maybe, if you dig deep enough, the two of you can get to the root of the problem together. Remember, even if you feel a hint of doubt — if you love someone, you can try to work through anything.

This article was originally published on Aug. 14, 2018

More like this
Here's Why Someone Cheats On Their Partner, Based On Their Zodiac Sign
By Danielle Sinay
25 Dirty Jokes To Text Your Partner For Filthy Laughs
By Corinne Sullivan
Sexy Texts To Send Your Partner Before Bed To Give Them Extra Sweet Dreams
By Rachel Shatto
Stay up to date