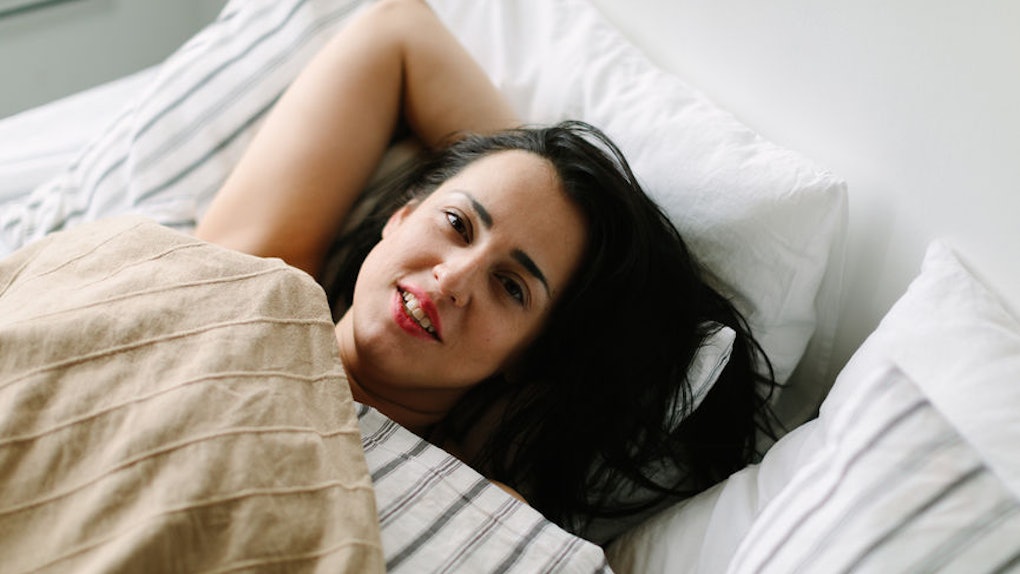 Can You Learn A Language In Your Sleep? Science Says It Could Be Possible, So Here's How You Can Try

Every few weeks or so, I start planning to travel to Europe. I've never actually booked anything, but I love researching cute Airbnb places on the coast of Italy, or looking up trains that could take me from Paris to Provence. Of course, then I start adding up costs, calculating travel times, and trying to decipher brochures that are all Greek to me (literally), and I get a little discouraged. If you've always dreamed of ordering a French pastry, in French, in an actual French cafe, worry no longer. Learning a new language in your sleep is actually possible, according to a new study.

For the study, which has been published in the scientific journal Current Biology, researchers from the University of Bern in Switzerland had 41 young, German-speaking participants drift off into a midday nap. Once they were asleep, the researchers introduced new (imaginary) vocabulary words and their German "definitions." After the participants woke up, they were given a test, during which they had to match the imaginary words with their definitions. According to the study's results, the participants were able to answer the test questions more accurately than they would as a result of chance, meaning that, per the researchers' conclusion, even during sleep, your brain can absorb a pretty decent amount of new information.

In fact, another study, published in the neuroscience journal Cerebral Cortex, found that learning a language in your sleep could actually be more effective in terms of memory than learning while you're awake. During the study, 60 German students were introduced to Dutch words they didn't know. Thirty participants were told to stay awake for four hours and listen to the words, and the other 30 were allowed to fall asleep listening. The study found that those who went to sleep were, surprisingly, significantly better at remembering the Dutch words than those who had been kept awake.

If you're excited to put your brain to work while you snooze, you might want to look into getting a pink noise machine. While "pink noise" might sound extra pretty, it's really just a description of certain nature sounds. According to Berkeley Wellness, an online resource that collaborates with the University of California, Berkeley, School of Public Health, "Pink noise is like white noise, but instead of having equal power across frequencies, pink noise comes out louder and more powerful at the lower frequencies (think of it as white noise with the bass turned up)." Common nature sounds like waves, leaves, or rain all fall under this category, per the online resource.

But how exactly can pink noise help your brain hold onto that new list of Mandarin vocabulary words? One study, published in the psychology journal Frontiers in Human Neuroscience, found that listening to pink noise, specifically, was linked to improved sleep-dependent memory storage in older adults. “The effect here, at least for memory, is quite related to the ability of the sound stimulus to enhance slow-wave sleep,” the study's senior author, Dr. Phyllis Zee, professor of neurology at Northwestern University Feinberg School of Medicine, told TIME. “That’s very much tied to what part of the slow wave the stimulus is hitting on.” In other words, something about the sound of pink noise, and the way it affects your brain waves, might help you store memories more effectively. Is your mind blown yet?

Now, I can't promise you'll suddenly wake up speaking fluent Portuguese after sleeping with a pink noise machine in your room for a few nights, but if you're curious about doing your own experiment (hey, it can't hurt), there are a number of YouTube videos designed specifically for learning a language during the night. Now I, for one, have to go nap and study for my possibly-less-hypothetical European excursions.