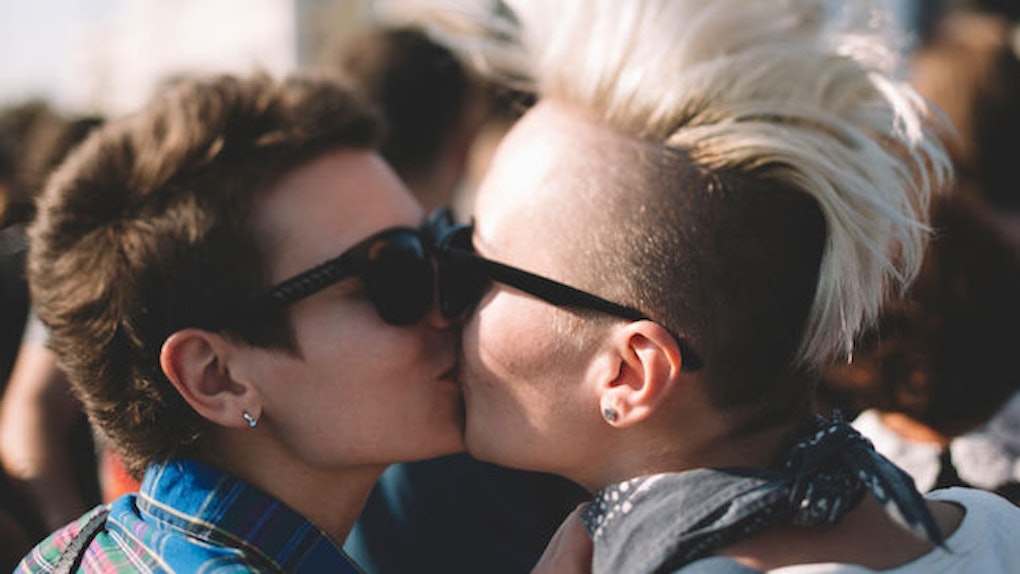 Can You Have Sex At A Music Festival? These 7 Hookup Stories Might Convince You To Try

As a self-identified introvert, claustrophobe, and someone who can generally be described as an "indoors" kind of gal, I haven't really had my fair share of summer festival experiences. The only one I've been to is the Billboard Hot 100 Festival in Jones Beach, New York in 2015. I jammed during Jason Derulo's set, but had to leave early due to some claustrophobia kicking in. While that festival seemed to cater more toward a younger festival audience, if you're wondering can you have sex at a music festival, it can most definitely be done.

Personally, I've never tried to hook up with someone at a festival because the crowdedness alone makes me uncomfortable. I wouldn't be in the best place to get with someone. But depending on your personality type, it can be an alluring place to have some fun. Festivals — especially Burning Man — are notorious for being hookup central. I don't know if it's the music, the dancing, the lights, or the crowds, but hookups seem to just kinda... happen.

I combed through the internet to find the wildest and most unbelievable festival hookup stories. Maybe they'll serve as inspiration for your next festival?

Beyoncé was somewhat involved in this person's hookup.

“A friend of mine was at a festival a few years ago with a group of people, including her friend and her friend's brother," Taylor*, 25, tells Elite Daily. "She claims she had sex with her friend's brother while standing up in a crowd of people ... through her short-shorts ... while Beyoncé played ... with the friend standing nearby. This story has haunted me ever since. Partly because, ew, sex near siblings is gross. But mostly because, hello, Beyoncé does not need to see that!!"

This Burning Man festival-goer had a funny reaction at the bar.

"Every time I f*cked in my tiny *ss tent, it would shake like a bear was trapped inside," said Reddit user Gobkin about the Burning Man festival. "Camp-mates caught on and would put that song that goes 'Ooga Chaga' ['Hooked on a Feeling' by Blue Suede] on at the bar and would applaud when we were done."

"I'm getting a yurt this year," the user added.

He was just a man, innocently looking for waffles.

Another Burning Man attendee recently came out before the festival as queer. He was biking around, looking for waffles, when a guy asked him if he wanted a shower, and he said yes. The other guy washed him down in the kiddie pool, then suggested he could clean him better with his mouth.

"He gives me a towel as he leads me to his trailer where he proceeds to go down on me with gusto," the Reddit user said, after getting clean in a kiddie pool. "There’s a sex swing in the trailer and he invites me to mount up and before long I’m getting f*cked for the first time. He’s really sweet about it, but very manly and comforting."

He finished his story by saying, "I ended up missing waffles, but had a great story to tell my girlfriend when I got back to camp."

This Coachella hookup didn't have a happily ever after.

"I hooked up with an Australian chick," said a Reddit user. "She was hot as hell. She then stayed [at] my place for a couple weeks before I went back to Australia. I went to go visit her and she didn't pick me up from the airport. It was pretty sad." Tragic.

This person found love for real.

"I saw this really pretty girl," said a Reddit user. "I started to dance with her, then I kissed her. Had the time of my life with her that night. Called her the next day, turns out she lives about [five] minutes away from me, so crazy! Fast forward three years, and we are both currently getting ready to graduate college, and have been dating ever since we met that night."

At Escape from Wonderland, this person hooked up with a famous actress.

"[I] made out with her throughout the whole Benny Benassi set, got her name but not her number," the Reddit user said. "The next day I went to check her name on Facebook, and guess what? Found out she is famous and is a main character on [an] ABC series."

"Spent the whole festival together talking about everything, laying in the grass, listening to beautiful music, staring into each other's eyes, curling up in the tent and making each other feel good in every way," said a Reddit user about their time at Afropunk Festival. "Said our goodbyes at the end with a 10-minute kiss and haven't spoken since."