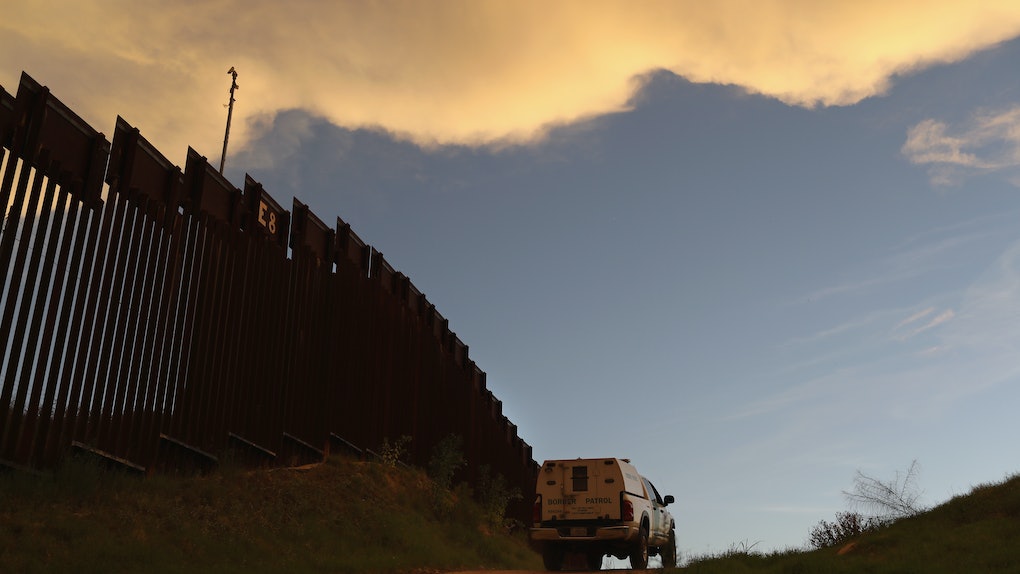 Can You Crowdfund The Border Wall? This Plan Is Kind Of Complicated

It's been a couple of years since President Donald Trump set sail on his 2016 presidential campaign trail. While almost two years in the White House have gone by, he's still touting the idea of a border wall between U.S. and Mexico. Tensions are rising as the wall has become a sticking point in budget negotiations, with the president threatening a government shutdown if he doesn't get $5 billion for the wall, according to The Hill. But there might be another way to pay for it, with a citizen supporter of the wall setting up a GoFundMe to cover the costs. But that leaves a very important question: Can you crowdfund the border wall? This plan to foot the bill is kind of complicated.

On Dec. 16, Purple Heart veteran Brian Kolfage set up the GoFundMe to raise money for Trump's border wall, and as of Dec. 20, the campaign has brought in around $3.5 million from over 56,000 donations since its creation. "If the 63 million people who voted for Trump each pledge $80, we can build the wall,” Kolfage wrote on the page. "That equates to roughly 5 Billion Dollars, [sic] even if we get half, that's half the wall. We can do this." He also promised that if the campaign doesn't reach it $1 billion goal, then he will return all the money back to the donors. Kolfage did not immediately reply to Elite Daily's request for comment on the campaign. But, let's say if the bar is reached, can the government actually use that money to pay for the wall? The answer is — kind of.

Truthfully, whether the administration can use the funds for the wall is a bit complicated. According to the Principles of Federal Appropriations Law, there's no mandate against private entities or individuals, such as those contributing to Kolfage's GoFundMe, from giving "gifts" directly into America's piggy bank — or as it's more commonly known, the U.S. Treasury. In fact, there's even a form that tells you exactly how to donate to the government, and people actually use it. In the 2018 fiscal year, a total of $775,654 was donated and $2,611,428 in 2017, according to the Treasury website. That money goes into a general account to reduce the public debt, according to Slate, but does not give donors a say in how it's used. However, when talking about donating to a specific government agency or directing how the money is used, the rules get a little more complicated.

For the purposes of this border wall campaign, the agency to look at is the Department of Homeland Security (DHS). According to a DHS directive, the department may accept conditional gifts, meaning gifts that are given for an exact purpose, as long as it doesn't "interfere with the work of DHS" or is "inconsistent with applicable laws or regulations," otherwise it has to be reviewed by the Office of the General Counsel. The directive also adds that the department can accept gifts to "carry out program functions regardless of whether or not appropriated funds are available for that purpose," as long as it's allowed under law. Trump asked for $5 billion in funding earlier this month for his security proposal which includes building the wall, according to The New York Times. Judging by the directive, it would seem that even if Trump doesn't get the funds he wants, the DHS could use the crowdfunded money. Elite Daily has reached out to GoFundMe for comment on their platform being used to raise money for the wall, but did not immediately hear back.

Additionally, if it happens that the government cannot accept money to build the wall specifically, there may be a way around it. According to the Terms of Service on Kolfage's GoFundMe page, Rep. Steven Palazzo (R-MS) is working on legislation that would allow the Treasury Department to issue revenue bonds to allow people to fund the wall using the crowdfunding method. Per Palazzo, precedent for this was set during World War II when "Americans purchased $185 billion in war bonds and financially supported our troops," he explained to WLOX on Dec. 17. He believes his Border Bonds Act of 2018 will allow "patriots of today's era to help support American security."

Kolfage also assures donors that they are working to "secure a point of contact" within the Trump Administration to make sure the money goes where it's supposed to. But, the GoFundMe page doesn't actually confirm that such a person has been found and secured just yet. Elite Daily reached out to the White House for comment on wether they've been in contact with Kolfage, but did not immediately hear back.

The truth is, the legality of crowdfunding the wall is complicated at best, but it looks like there might be a road from the donors to the wall — albeit a winding one.