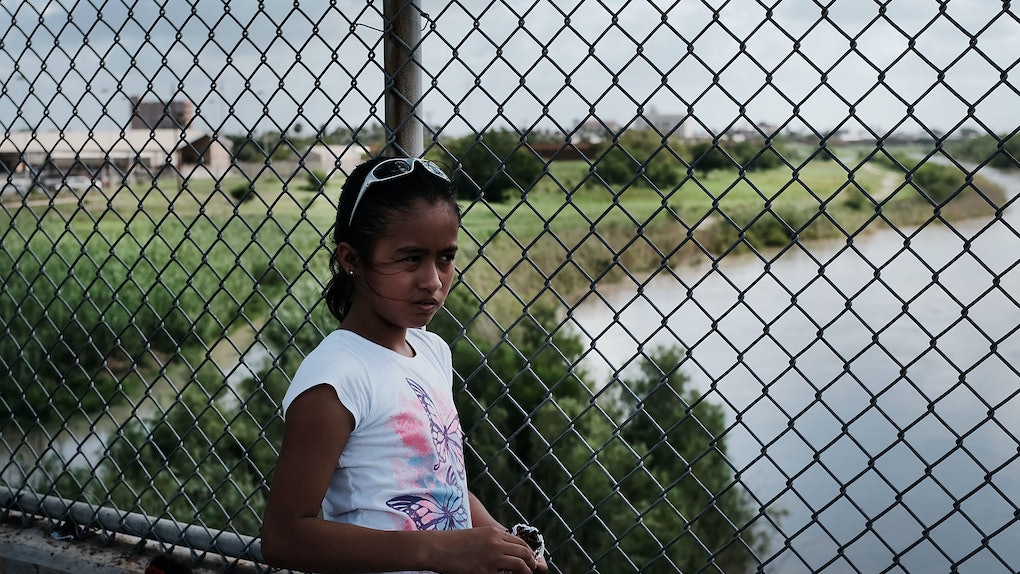 Can The Trump Admin Deport Reunited Families? Not For Now, Judge Rules

Although it's been weeks since President Donald Trump signed a executive order to halt the practice of separating migrant families, it seems like the questions surrounding the reunification process just keep rolling in. Many people are, specifically, wondering if the Trump administration can deport reunited families, and some might be pleased with the answer as of this week. On Monday, July 16, a federal judge temporarily blocked the deportations of families who have been reunited following the administration's highly-controversial "zero tolerance" policy. Although it's not a long-term ruling, it might be at least be a moment of relief for separated migrant families.

According to The Hill, the motion came after the American Civil Liberties Union (ACLU) expressed their concerns about "mass deportations" following the reunion of children over the age of 5 with their parents. ACLU attorneys reportedly requested that deportations be pushed at least a week after families were reunited to guarantee that no family is being improperly deported. They also argued the week would be crucial for parents to decide whether or not they'd want their children to be deported along with them.

“A one-week stay is a reasonable and appropriate remedy to ensure that the unimaginable trauma these families have suffered does not turn even worse because parents made an uninformed decision about the fate of their child,” the ACLU wrote, according to the outlet.

Judge Dana Sabraw accepted the ACLU's request, giving the government one week — until July 23 — to respond to its concerns. Sabraw said he'll make a permanent ruling regarding deportation scheduling in the time after.

The motion comes just days after the Trump administration revealed that 2,551 total children ages 5 to 17 have been separated from their parents after crossing the United States' southern border illegally. The United States Department of Health and Human Services (HHS) has a deadline of July 26 to reunite all those children with their parents, however, the administration can't find the guardians of 71 of those children, according to HHS official Jonathan White. The Immigration and Customs Enforcement (ICE) also has 1,609 parents in detention, which has prompted concerns of whether or not the administration will meet its upcoming deadline to reunite separated children with their parents since kids can't go through legal proceedings with them, and also because the administration missed the first deadline.

The administration previously had a deadline of July 10 to reunite 102 migrant children under age 5 with their families. However, government officials said they encountered multiple challenges that slowed down the reunification process. At least 18 parents had already been deported or released after the government separated them from their children, and therefore, could not be reunited. Other parents were in custody awaiting prosecution, or had criminal records that prohibited them from immediately claiming their children. Officials also said the lengthy reunification process helped them ensure that children weren't being placed in the hands of dangerous criminals or child traffickers.

Many onlookers were frustrated by the delay due to the heartbreaking reports of young children and even infants being taken from their parents, as well as sad audio of children crying for their parents. In the end, the administration was able to reunite all separated children under age 5 who were eligible for reunification. There are, however, 46 children under age 5 who have yet to be reunited with their families because the parent was either determined to be unsafe or was not actually a parent, according to the Huffington Post.

The reunification process is an ongoing matter. But considering the life changing effects that separation can have on these children, it's probably not a bad idea to slow down — even temporarily — and make sure that everything being done is in the best interests of the children.