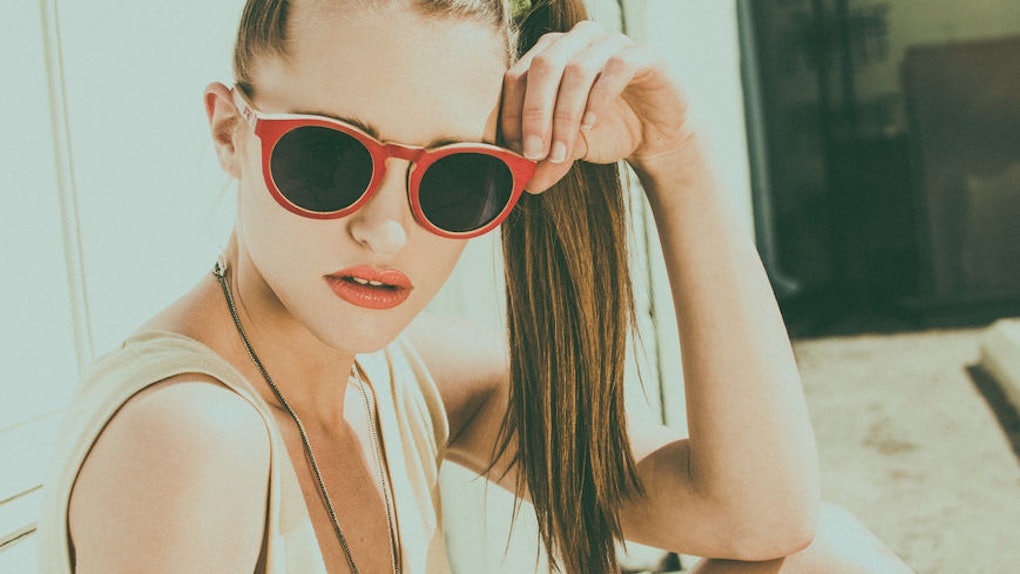 Can The Heat Affect Your Mood? Experts Say Summer Can Make You Salty, So Here's How To Chill

Let’s compare notes guys, because summer’s in full swing now, and I want to know how you’re feeling. I know most of you are probably hype AF that the chill of winter has long subsided, the sun is shining on the reg these days, and your weekends are jam-packed with road trips to the shore, spending time outdoors, and maybe even cashing in on a few flier miles for the tropical vacay of your dreams. It’s understandable — I mean, there’s really no denying the chillaxing vibe of summer is pretty sweet, but can the heat affect your mood for the worst when warm temps keep getting warmer? Because seriously, I don’t know about you, but when my weather forecast app reads 85 degrees Fahrenheit or higher, I’m cranking up the AC to cool me down and keep my mood in check.

This is one of those things I definitely inherited from my mama. As much as I love summer sunshine and spending entire days in my favorite bikini going from pool to patio and back again, as soon as temperatures run too high, that happy-go-lucky smile is washed away by beads of sweat, and I’m back to daydreaming of breezy sweater weather. It’s not even a situation of getting me back in the AC either; I get so agitated in the heat that it’s almost unbearable, and according to experts, I’m certainly not the only one.

Summertime vibes are typically well and good, but if you can’t take the heat, high temps can definitely affect your mood.

For the record, I’m not just being a whiner here; science has provided me with enough hard evidence to prove the scorching heat has a lot of people beat. For instance, during a two-part study published in the European Journal of Social Psychology in May of 2017, researchers explored how well retail workers and students functioned in uncomfortably hot conditions. The first half of the research focused on workers in a chain restaurant, and it was found that a whopping 50 percent of workers were less likely to actively engage with their customers. Yikes — hopefully that didn’t reflect in their tips too much.

The second part of the study, Refinery29 reports, split college management course students into two classrooms — one that was humid and stuffy, and another that was cool and air-conditioned — to figure out if heat affects your motivation. Now, I don’t know about you, but I always struggled to stay focused in school as soon as June rolled around, so I can understand how only 64 percent of students in the humid classroom were active participants, as opposed to the 94 percent raising their hands in the room with the AC blasting.

The heat affects your mood in ways beyond your level of laziness, though. In fact, it can make you hella cranky.

According to Robert Glatter, M.D., an assistant professor of emergency medicine at Lenox Hill Hospital, Northwell Health, the heat affects your mood in a lot of different ways, depending on your preferences and personality. “While the majority of people feel invigorated and motivated to engage in activities [in the summer], in some people, the heat may trigger feelings of agitation, aggression, making them feel out of control,” he tells Elite Daily. Feelings of agitation and aggression, huh? Yup, that sounds about right to me.

But while some people (me) just feel kind of crabby in the heat, Glatter goes on to explain that one in 10 cases of all seasonal affective disorders (SAD) are "reversed." This, per Mayo Clinic's definition of SAD, means that someone with reverse SAD feels an onset of symptoms of depression in the spring and summer months because of the changes related to the warmer season, such as more sunlight exposure, a drastic change in temperature, etc.

"It’s believed that high temperatures and heat waves may be involved in reverse SAD," Glatter tells Elite Daily, because while someone diagnosed with summer SAD may "display manic behaviors," the opposite occurs in people who battle winter SAD, who are "often depressed and lack energy and motivation," according to Glatter. Of course, it's important to note that there's a clear difference between feeling irritable in the heat, and legitimately being diagnosed with reverse SAD, but if you're experiencing symptoms like lack of sleep, loss of appetite, weight loss, or heightened anxiety/agitation, Glatter says, it might be in your best interest to talk to a doctor.

If the heat does affect your mood in that you feel cranky or lazy when temperatures rise, you don't have to sweat it.

The cool thing about summer (no pun intended) is that, yeah, there are going to be days when it's scorching hot outside, but there are also a ton of ways to simmer down physically and mentally, too. For me, my first line of defense when it's so hot outside you can literally fry an egg on the sidewalk, is to take a dip in my parents' pool. For my mom, it's turning right back around into the house and blasting the AC. Seriously, all you need to do to physiologically cool down is to either retreat to your couch, turn on Netflix, and actually chill, or turn on the cold tap and soak in a tub of cool water when the pool isn't an option.

As for when the heat affects your mood and a little Dr. Jekyll and Mr. Hyde action happens, get ~centered~ again by practicing breathing exercises to cool you down. You didn't think meditation was just meant to unwind, did you? According to Gaiam, there's a lot of pressure that comes with summertime, between the heat beating down on you and a hectic social calendar. But when stress rises, breathing exercises, meditation, and carefully crafted yoga flows can help keep you feel level-headed through it all.

So breathe in, breathe out, turn up the AC, and turn down the drama. Summer isn't meant to be stressful, friend, so if you can't beat the heat, the best thing you can do for your mood is to get out of it.

More like this
These 40 Clever Vaccine Selfie Instagram Captions Deserve A Shot On Your Feed
By Rachel Chapman
7 TikTok Recipes Using Ramen To Make Lasagna, Pizza, Smoothies, & More Treats
By Kelly Pau
33 'Mean Girls' Quotes For Instagram, Because You're Fetch & Can Be Salty If You Want To
By Rachel Chapman
Stay up to date