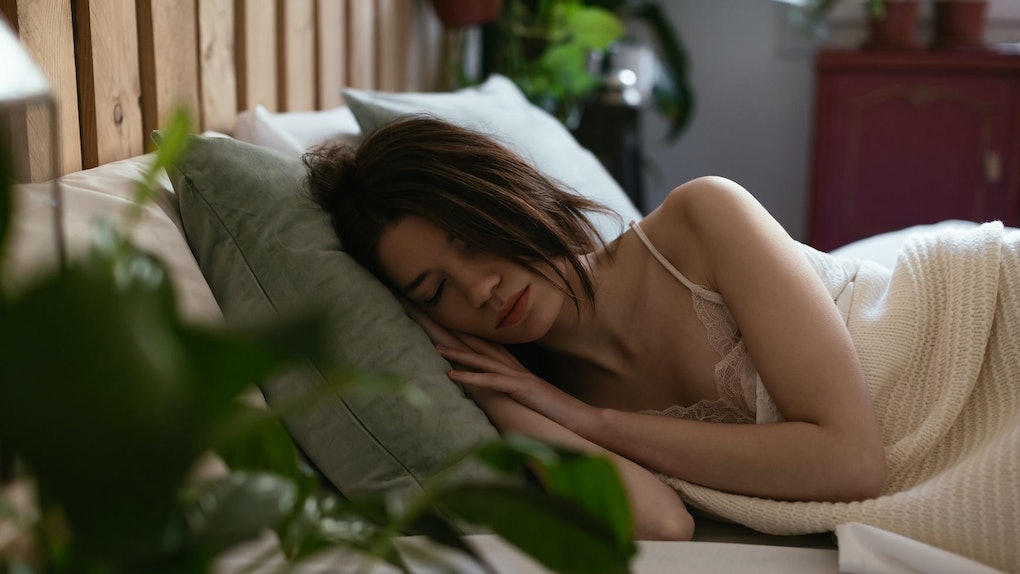 Can Dreams Make You Tired? It Depends On Your Sleeping Patterns, According To An Expert

Are your dreams so incredibly realistic that you’re exhausted from dreaming? You were just flying, then your teeth fell out, and then you had to fight off a giant bear. What a day! But it wasn't a day, it was just a dream, and now you have to wake up and be present for an entire day? Hard pass. Nicole Richie really spoke your truth when she said, "I love to sleep, like I sleep so much that I wake up exhausted." But can dreams make you tired? Or are you just being a wee bit dramatic? As someone whose screen-name used to be DramaQueenGC, I'm going to go with the latter.

I'm also going to go with the latter because, according to Dr. Raj Dasgupta, an assistant professor of clinical medicine at the University of Southern California's Keck School of Medicine, who's also part of The American Academy of Sleep Medicine, dreams in and of themselves don't exactly leave you feeling sleepy, particularly because of when it is during your sleep that you're most likely to dream. "If you are dreaming in REM sleep [your dreams shouldn't make you tired] because [REM sleep is] more refreshing," Dr. Dasgupta tells Elite Daily. "On the contrary, if you’re not in REM sleep, yes, that could lead to daytime fatigue and tiredness."

In case that explanation made your eyes glaze over a bit, let's break down the different stages of sleep, including REM sleep, to make things a bit more clear. According to the National Sleep Foundation, in the first two stages of your slumber, you're basically in a pretty light sleep, in which you can easily be woken up — think catnaps and power naps. Then, during stages three and four, you start to enter a much deeper sleep, in which it's harder to be woken up, and "your body becomes less responsive to outside stimuli," per the National Sleep Foundation. Then you finally reach REM, or rapid eye movement sleep, roughly an hour and a half into your slumber, and you actually experience multiple REM stages throughout the night, according to the foundation, with each one lasting about an hour. And yes, during those REM stages, that's "when most dreaming occurs," per the organization.

Not only is REM sleep the time when most of your dreams happen, but according to Dr. Dasgupta, it's also "one of the most important stages of sleep because it rejuvenates the body [and] mind and helps out with your memory and health," he explains, adding, "If you have vivid dreams, that's REM sleep."

What's really interesting, though, is that it's possible to dream in other phases of sleep — but that would then be considered a "non-REM dream," which, according to Dr. Dasgupta, is usually a sign that you're not getting a good night's rest. So, in that sense at least, dreams could leave you feeling a bit sleepy the next day, depending on when those dreams were happening throughout the night.

While REM dreams won't exactly leave you feeling tired, there are other factors that can interrupt your sleep, says Dr. Dasgupta. "There are many things that can affect the quality of your sleep. Many medications (such as a prescription for depression) can prevent you from getting REM sleep and [having] vivid dreams. Or medical issues like chronic pain and heartburn can wake you up in the middle of your sleep. But the dream itself won’t make you tired," he explains.

In other words, even if you dream one night that you battled a bear, no matter how exhausting it might have felt in the moment, it probably won't make you feel tired IRL once you're awake.

Generally speaking, if you happen to not get a good night of sleep, your body can actually rebound better than you might think, says Dr. Dasgupta. "When you are sleep-deprived, your body tends to rebound. It knows if it’s going to get sleep, it needs those stages," he explains. "When your body rebounds from the lack of sleep, it goes to the most essential stage of sleep, which is REM."

Bottom line: Do your best to clock in around seven to eight hours of sleep each night, as per Dr. Dasgupta's recommendations, and don't fret too much if a scary nightmare wakes you up in the middle of your slumber. Chances are, your body will know how to bounce back.