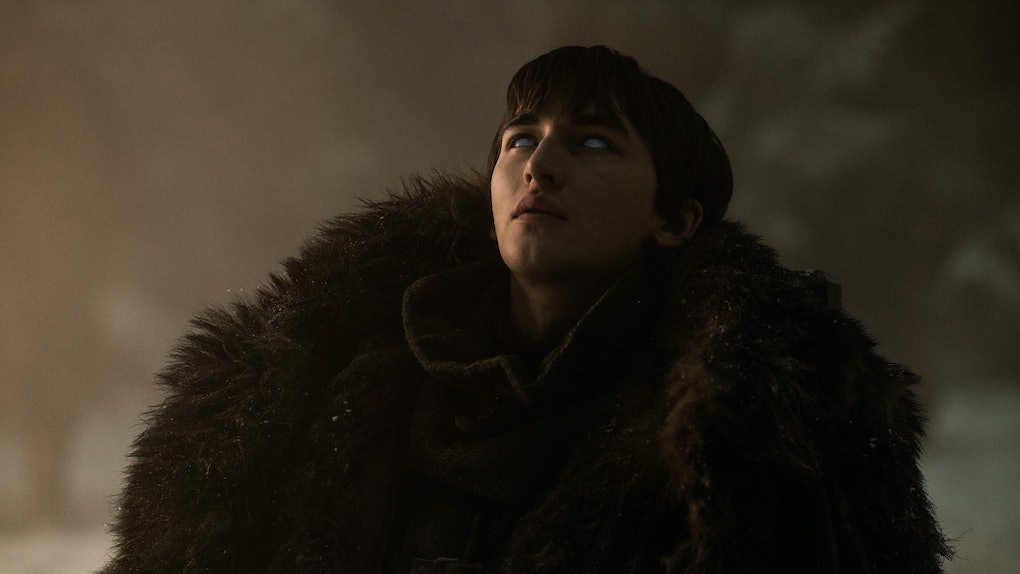 Can Bran See The Future On 'Game Of Thrones'? Let's Break Down The 3-Eyed Raven's Powers

Game of Thrones Season 8 took a huge turn when it revealed the Night King's real aim wasn't just to kill the living, but the memory of their deeds, by taking out the Three-Eyed Raven. This put Bran directly in his crosshairs when the Battle of Winterfell commenced this week. But what was more impressive was how the Night King was defeated. Bran seemed to know both that Theon would die in an attempt to defend Bran, as well as how the Night King would ultimately die. Can Bran see the future on Game Of Thrones?

It certainly seems that way. For instance, it was Bran who gave the catspaw dagger to Arya when she first arrived home in Winterfell. Most fans assumed he was handing it over because he knew of her current skill set as an assassin, and perhaps her plans to kill Cersei. (Killing Cersei with the dagger that started the war between the Starks and the Lannisters would be some poetic justice.)

But clearly not. Bran handed her that dagger because he knew she would use it to kill the Night King. It begs the question: Did Bran know she would, or did he know it was one of many possibilities and was doing what he could to set her on the right path?

The show doesn't want to make Bran's ability to see the future a hard fact. This isn't like Dr. Strange who sat down with the Time Stone and rolled through 14,000,605 scenarios at a blow. The books are even less forthcoming, but they do put a "how" behind Bran's abilities in a way the show does not.

In the novels, greenseers are those with an innate ability to see images of possible future events or see events that were happening very far away. Jojen had a touch of this, he could see things in dreams. But full greenseers also have a warging component, giving them the ability to control animals, and even sometimes, other people.

The warging element is essential, especially when it comes to trees. As fans know, weirwood trees would have faces carved in them, supposedly done by Children of the Forest. But in the novels, it's not the Children, but the greenseers who carve those faces, so they can see through the eyes of the trees. This is how they access the memories and history, and how Bran sees things like Rhaegar's marriage to Lyanna. They married under a weirwood. Their union was witnessed by a tree.

As for the future, Jojen couldn't see more than a face and a location, but that was enough to direct him to find Bran. Bran is far more powerful than Jojen ever was, and most likely can see more. But he cannot see the whole picture either, he's just better at interpreting the signs.

Did Bran foresee Arya killing the Night King? He probably knew it was a possibility and shifted events to help tilt the scales. As to what happens in the last three episodes, Bran hopefully is pushing towards a happy ending there too.