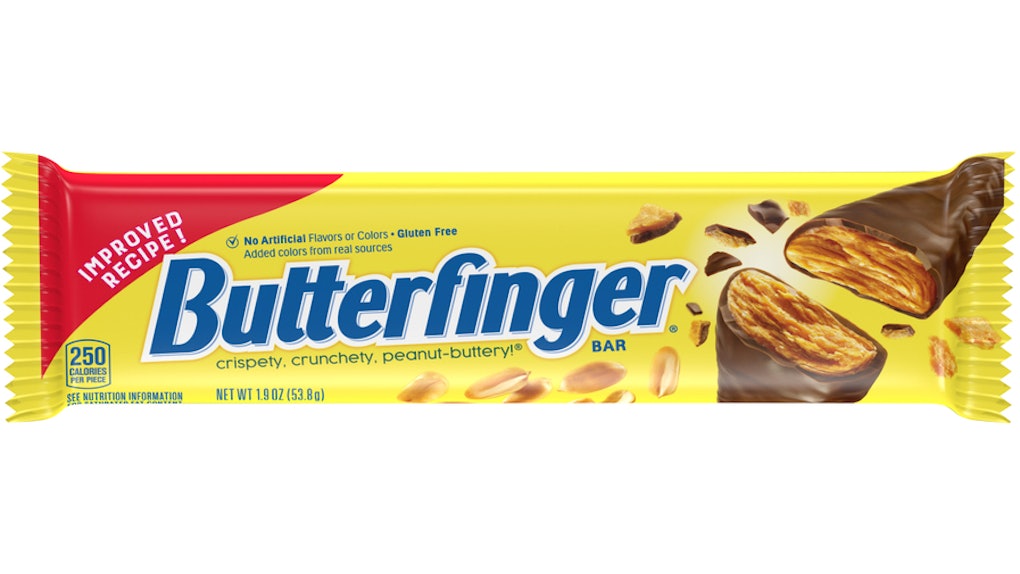 Butterfinger's New Candy Bar Recipe Is All About Better Ingredients

In some cases, I wholeheartedly believe in not fixing something "if it ain't broke." But in other cases, I believe that nothing's wrong with a little glow-up, especially if it's literally been over ten years since its last makeover. One classic candy bar, for example, recently underwent a major quality update, and you'll definitely want to try the updated bite. Coming in the new year, Butterfinger's new candy bar recipe will focus on using better ingredients. Personally, I am so darn hyped.

First off, Butterfinger's classic chocolatey coating underwent a major renovation. It's now going to be made with even more milk and cocoa than ever before, according to Butterfinger. That makes it extra rich and like... ten times creamier.

In terms of the traditional peanut-y filling, the brand is starting to be more careful in selecting its locally grown U.S. peanuts. Plus, Butterfinger has upped its texture game to improve your overall eating experience, which was concocted through testing and research. This new recipe is also improved thanks to the removal of both TBHQ (an additive found in processed foods) and hydrogenated oils, to make the recipe a little more simple. These changes sound small, but I think they will pay off in the end, because getting rid of not-so-great ingredients is generally a good idea.

While the taste of the iconic candy bar is what matters most to people, quality packaging is vital when it comes to keeping food fresh. And it turns out the brand also totally upgraded the beloved candy's packaging, to further protect the quality of their products. To keep your chocolate fresh AF, Butterfinger will use a brand new, double-layer packaging to protect the taste of the candy. I'm all about maintaining that delicious flavor, and clearly, Butterfinger is, too.

If you can't wait to get a taste of the improved Butterfinger bar, you can actually get your hands on the new recipe super soon. Once the new year hits in January 2019, chocolate fans will also get a taste of the new Butterfinger bar. The candy will be available nationwide in convenience stores, drug stores, and grocery stores, as of February 2019. You'll also be able to find them in larger chains, like in Walmart, Target, CVS, Walgreens, Kroger, Publix, and 7-Eleven. Pretty soon, you'll be seeing the new Butterfinger bars everywhere you look.

Improvements to your fave products are nothing new. You may remember when Kool-Aid underwent a transformation of sorts with a totally new product, Kool-Aid Sparklers. With four colorful cans, Sparklers combine the sweet taste you grew up knowing and loving, with the refreshing, carbonated taste of sparkling water. They hit store shelves at the beginning of the summer 2018, and they quickly became nationally available at Target, Walmart, and on Amazon. You can still get them, if you haven't already.

I know this is all happening pretty quickly, but since Butterfinger's recipe change is all about improving quality, I'm so here for it. With a goal to use better ingredients and to keep the candy as fresh as possible, I think it will improve the overall munching experience. TBH, I can't wait.