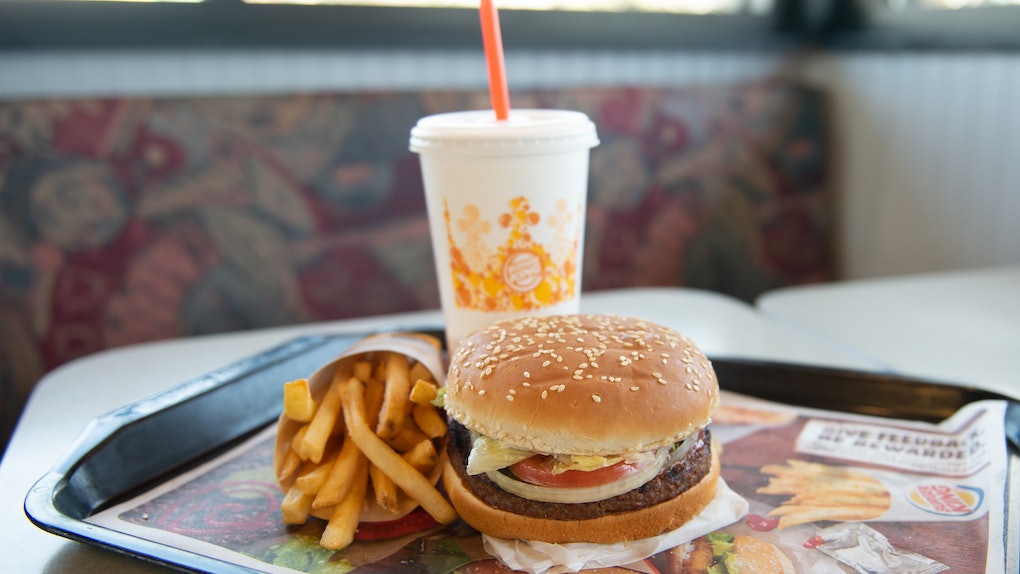 If you're as much of a fast food lover as I am, you'll be stoked to hear about Burger King's new menu deals for summer 2019. Whether you're craving a bite to eat or ready to inhale a whole filling meal, Burger King is offering guests Whopper deals that can satisfy any craving for $6 or less. Burger King's summer 2019 Whopper deals will get you meals for $4, $5, or $6, so get ready for tasty and affordable days ahead.

As of June 1, 2019, Burger King is offering three Whopper deals that will get you slightly different meals. At the center of each meal is Burger King's signature Whopper sandwich, made with flame-grilled beef, juicy tomatoes, crisp lettuce, pickles, onion, ketchup, and mayo all served on a soft sesame seed bun. So, in addition to Whopper sandwiches, what do Burger King's Whopper deals offer? The $4 Whopper deal at Burger King will score you a Whopper Jr., fries, and a soft drink. This option is perfect if you're not feeling hungry enough for a whole Whopper — the Whopper Jr. is slightly smaller and the beef patty contains a little less meat. The $5 Whopper deal at Burger King will get guests a Whopper, fries, and a soft drink, and is the perfect option if you're craving an iconic BK meal. For those who like their burgers a little bigger, BK's $6 Whopper deal comes with a Double Whopper, fries, and a soft drink, featuring a sandwich that contains two quarter-pound beef patties instead of one.

The Burger King summer 2019 Whopper deal is available for a limited time at participating locations, and prices for the deal are higher in Alaska; Hawaii; Boston, Massachusetts; New York City, New York; Long Island, New York; and Seattle, Washington, according to the BK website. The offer is available without a coupon, so you don't have to present anything at checkout.

Whoppers aren't the only food at the center of Burger King's summer deals. Guests can also score a 10 piece Chicken Nuggets with two sauces for just $1.49 for a limited time, or get two burgers for $6 as part of BK's "2 for 6 Mix or Match" deal. Plus, BK fans who download the Burger King app can get all sort of discounts and freebies with new offers and coupons appearing on the app weekly.

So, what are you waiting for? Get out there and grab one of these deals while you can to celebrate the arrival of summer.