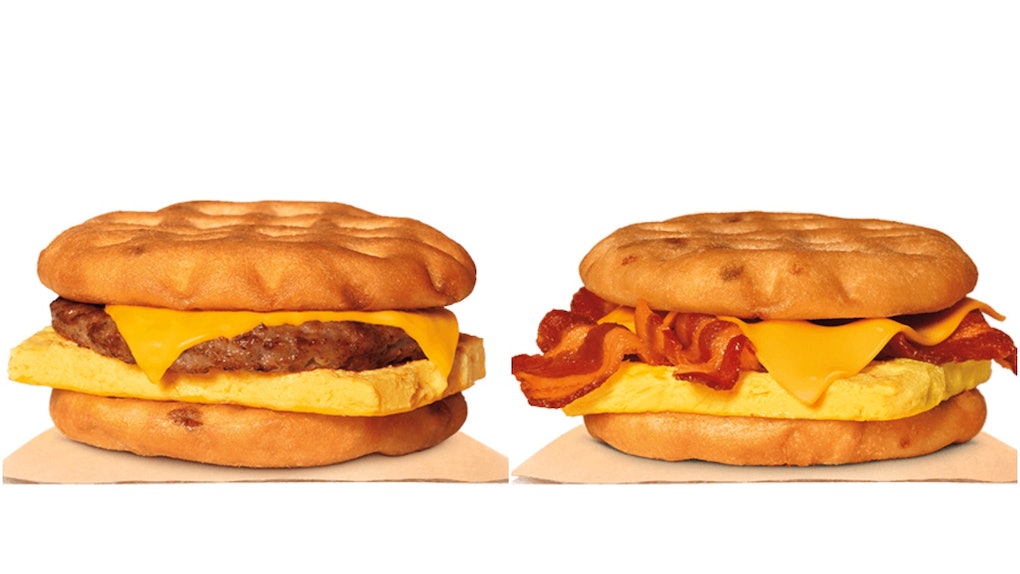 Burger King is making it way easier to wake up early with its newly released breakfast menu items. Early mornings are made infinitely better by a big, hearty breakfast, so Burger King's Maple Waffle Sandwiches are a must-add to your morning routine. The sweet and savory delights taste as good as they sound and you'll want to get in on this a.m. boost at Burger King.

According to Delish, the new items will be available for a limited amount of time nationwide. They're a bargain deal at $3.49 for a sandwich. If you're looking to go all out in the morning, you can even upgrade to a combo meal for $4.99, which will get you hash browns and coffee along with the sandwich of your choice. Breakfast at Burger King typically runs until 10:30 a.m., so be sure to set that alarm clock and head on over to your local BK to try a Maple Waffle Sandwich.

Customers are heading to social media to weigh in on the Maple Waffle Sandwich. Twitter user @RealJdm819 posted a picture of the meal with the review: "Love today's Maple Waffle Sausage Sandwich from Burger King."

User @Kellywolfenden_'s tweet makes me want to head to Burger King ASAP and get my hands on a sandwich: "Burger King's new Waffle Breakfast Sandwich is honestly fire, don't fight me."

Customers left out of the delicious new breakfast release, like vegetarians and vegans, also took it to the internet to express their disappointment. Twitter user @tiny_scilla suggested to the fast food chain that "A vegan waffle sandwich would be nice."

So what are you waiting for? It's time to head on over to your local Burger King and start the day right with a Maple Waffle Sandwich. While your at it, check out the other items on Burger King's breakfast menu. The Maple Waffle Sandwich pairs well with sides like French Toast Sticks or even the Pancake Platter. However you decide to craft your early morning bite, make sure it's fit for your taste — it's the most important meal of the day, after all.