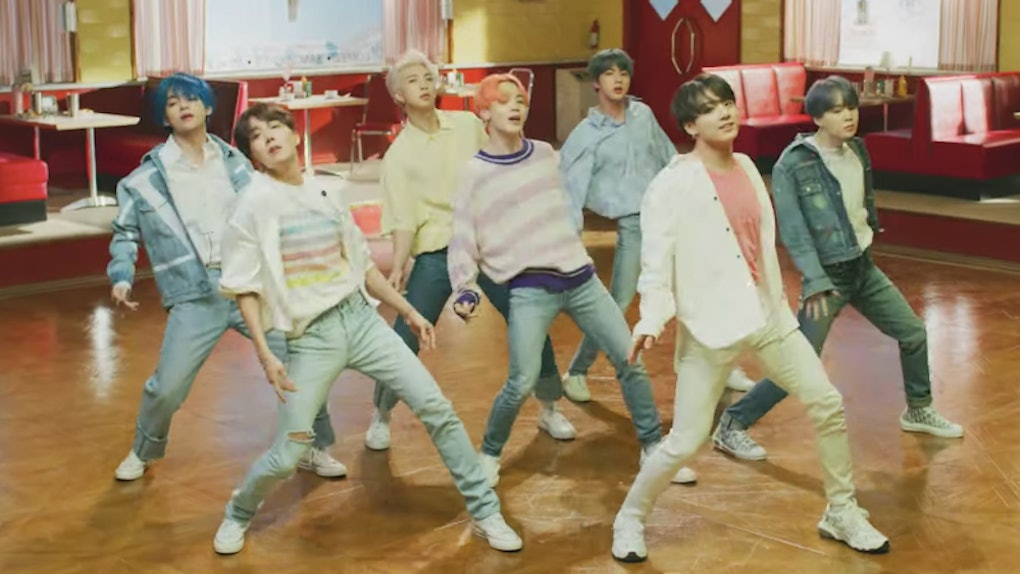 Are you ready for Friday, April 12, ARMY? Well, you’d better be, because that’s the day BTS finally releases the video for their collab with Halsey, “Boy With Luv.” BTS has already released one teaser for the video and on April 10, they released a second one. BTS’ second “Boy With Luv” video teaser is definitely worth a watch!

BTS released the very first trailer for the video on Monday, April 8 and in it, the guys are at the movies where Halsey is working the ticket booth. Halsey actually leaves the booth only to briefly encounter BTS in front of the theater. And behind them, the theater’s name is revealed to be “Persona,” which you know is part of BTS’ new album name. The new album is called Map of the Soul: Persona and is slated for release on April 12.

The title of the album actually stems from Dr. Murray Stein’s research on Carl Jung. Dr. Stein wrote a book called Jung’s Map of the Soul: An Introduction, which is something the members of BTS have probably read and decided to work its themes into their album. Dr. Stein actually talked about BTS and their album in a recent interview on the Speaking on Jung podcast. Here’s what he said about BTS and how he learned about who they are:

I was quite impressed with Kim Nam-joon, RM as he’s called — I guess he’s the leader of the BTS group — when he spoke at the United Nations. What impressed me about that was that he kept the distinction, carefully, between who he was a boy growing up in a small village outside of Seoul, Korea and who he is publicly and famously now. You know, a star in the firmament of the entertainment world. If he were to identify with that role totally, he would lose contact with himself, with the boy he was, with the human being that he is. He would be ungrounded.

In this context, “ungrounded” means losing contact with your innermost self. And as you already know, BTS' latest musical efforts have focused heavily on loving yourself and speaking yourself.

So, the fact that the word “persona” features so prominently in the album’s title and in the music video for “Boy With Luv” holds a lot of meaning, even for those outside of the BTS fandom.

In any case, the second teaser is here and even though the video is really short, clocking in at less than 30 seconds, there is dancing galore. The boys are seen dancing their lives away in front of that giant "Love" sign shown in the first teaser. They dance again in a brightly lit restaurant. Halsey is nowhere to be seen yet, but fans only have to wait two more days for her BTS debut.

And here’s a look at the very first teaser BTS shared for the video:

As you can see from the teasers, BTS and Halsey have put a lot of effort into this video and all the promotion surrounding it.

I have no doubt that this video is going to be everything ARMY has dreamed of and so much more. I just can’t wait to see how it turns out!