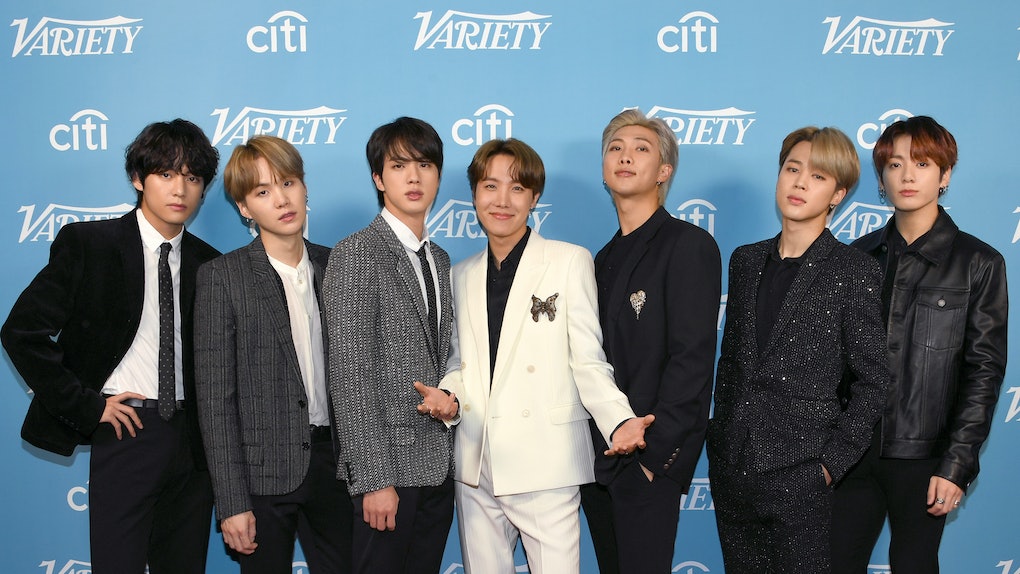 With the end of 2019 right around the corner, BTS is gifting ARMYs some new music just in time for 2020. On Saturday, Dec. 7, RM, Jungkook, Jimin, V, Suga, Jin, and J-Hope announced that they were planning to release a new album -- and fans are so hype about the news. BTS' Hitmakers acceptance speech while taking home Variety's group of the year award promised that we'll be hearing new music "in the near future," so get excited.

On Dec. 7, the seven-member K-pop band were the guests of honor while making an appearance at Variety's Hitmakers brunch at the Soho House in West Hollywood. Alongside fellow hitmakers Billie Eilish, Megan Thee Stallion, Kasey Musgraves, and Lil Nas X, the group accepted the honor by imparting some exciting news.

When the group took to the stage, RM addressed the crowd, saying, "Since we’re not very used to this kind of event, I’m very nervous, but I’m going to take it easy. First of all, I’d like to say thank you to Shirley [their executive music editor], of course, and all the editors at Variety for choosing us as group of the year. 2019 was truly a very surprising and exciting year for us; this event really made it even more special."

"We have to say thank you and that we love you to all the ARMYs all over the world who always sends us the greatest love and support," he added after thanking Big Hit Entertainment. He then imparted some exciting news to fans, saying, "The great news is that we are currently working on our new music and new album and can’t wait to share them with you guys in the near future. I hope you guys are so excited to discover what BTS has in store in 2020."

This isn't the first time that the group has hinted at its upcoming album. Just days earlier on Dec. 4, Jimin and Jin opened up about what fans can expect from their follow-up to their chart-topping Map of the Soul: Persona while accepting the Album of the Year award from Jimmy Fallon at the 2019 Mnet Asian Music Awards.

"First, to Jimmy Fallon, who made a special appearance, thank you so much," Jimin addressed the crowd before delving into details of their upcoming album. "We're now preparing for our next album, and I think we'll be able to appear in front of you with a much greater album than what you'll be expecting. Thank you!"

Meanwhile, Jin said that not only will the music be "good," but it'll be "honest." He said:

We work really hard at making music. Our next album will have good music too. Many people — including the artists who are here today — many people are making good songs. I hope for a world in which all those songs are recognized and listened to. Dishonest methods are okay too, but what about making music with more honest methods? I hope for a time when everyone’s making good music and listening to good music.

Fans will have to wait and see when BTS decides to share the launch date of the upcoming album, but I'd keep an eye out for new details and sneak previews as we get closer to 2020.