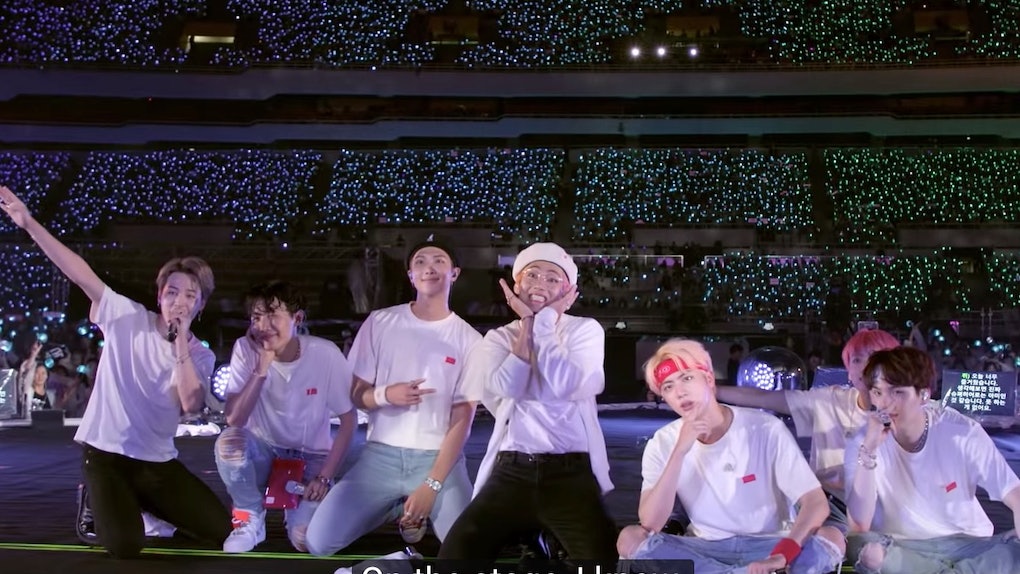 BTS' 'Bring The Soul: Docu-Series' Trailer Will Fill You With So Many Emotions

BTS may be taking a much-needed break at the moment, but that hasn't stopped news about the boys from dropping on what seems like a daily basis. First, ARMY found out that the much-anticipated Bring The Soul: Docu-Series would be available for fans exclusively on the Weverse app beginning on Aug. 27 — which is so, so soon! Then, on Aug. 19, BTS shared a new sneak peek of the series on their BangtanTV YouTube channel! Have you seen it yet? Trust me when I tell you that BTS' Bring The Soul: Docu-Series trailer will fill you with so much joy, but also with many emotions.

Following the release of Bring The Soul: The Movie on Aug. 7, BTS first announced their spin-off docu-series, which will take viewers behind the scenes on their Love Yourself tour. Fans who went to see the film got a sneak peek of the first trailer, which featured concert footage and interviews with the band members. That trailer was later released on BangtanTV on August 10.

On Aug. 19, BTS dropped a second trailer and, lemme tell ya, the boys got deep about their challenges on tour!

"Sometimes it was hard," Jungkook explains in the video. "Sometimes I felt powerless."

My heart! But BTS also talked about the way all the love and support from ARMY has helped make everything better.

"They make me better, become a better person," V explains.

"I want them to be happy," Jimin adds. "As happy as we are, even happier than we are."

Has anything ever been sweeter?

The Bring The Soul: Docu-Series will feature six episodes available on their official fan app, Wevwese, with episodes dropping each Tuesday from Aug. 27 until Oct. 1. And there are descriptions of the first three episodes on the official website, you guys! Each description begins with a quote from one BTS member to another that will play into that specific episode's theme.

The first episode, which airs on Aug. 27, is called "Challenge." The quote for that one is from Suga to RM: "The one thing I’m most afraid of is..."

Here's the full description for episode one:

It’s about time they are used to live performances, but the world tour always brings out the nervous sides of the BTS members. The members candidly speak about this year’s tour, their first-ever stadium concert in South Korea, and the docu-series.

The second episode, titled "Passion," will drop on Sept. 3. This one revolves around a quote from RM to Jimin: "I want to love myself too."

Here's the description for episode two:

Jet lag and fatigue are taking their toll, and now the flu is dragging some of the members down. But this is no time to hit the floor. Waiting the members are the unrivaled magnitude of the venues and the audiences, together with the heated attention of the American media.

And the third episode, which is called "Relationship," will air on Sept. 10. This time the quote is from Jimin to Jungkook: "Apparently, I said I feel alone..."

Here's the description for episode three:

Halfway through the North America tour, BTS find themselves entangled in a crisis of their own. It was each other that BTS members had through thick and thin for the last 6 years, and holding them together is their intimate and lasting ‘relationship.’

Get ready to feel all the feels, ARMY, when Bring The Soul: Docu-Series drops on Weverse on Aug. 27.

In the meantime, you can check out the full trailer here:

More like this
'He's All That': Premiere Date, Cast, Trailer, Filming News, & More
By Dylan Kickham
Meghan & Harry's Netflix Show 'Heart Of Invictus': Release Date, Synopsis, Trailer, & More Info
By Michele Mendez
Chrissy Teigen's Tweet Announcing Her Return To Twitter Is A Clapback To The Haters
By Michele Mendez
Stay up to date