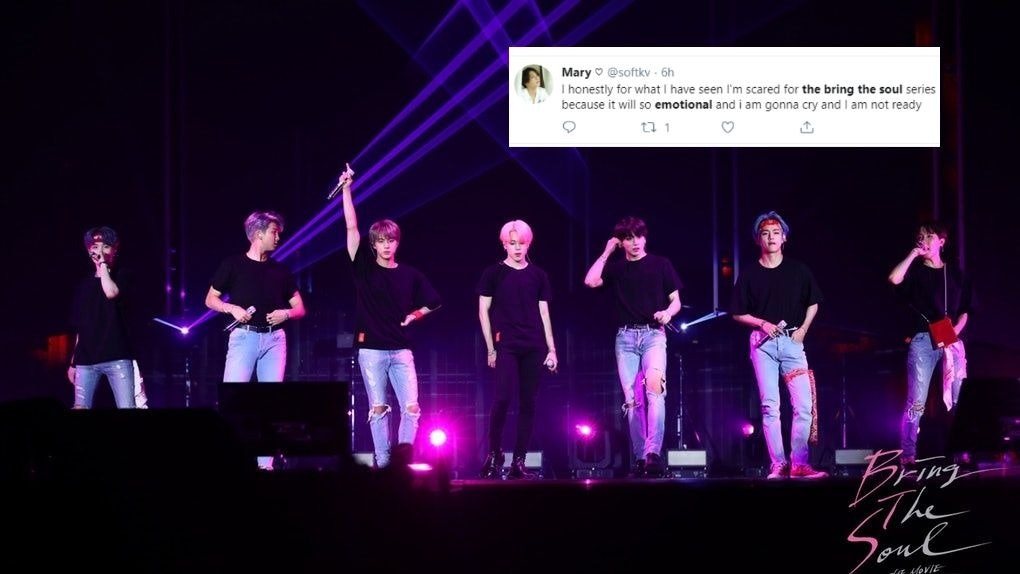 BTS is on vacation, but, in some ways, it definitely doesn't feel like it to ARMY. Just a few days after beginning their break following their Lotte Duty Free Family concert on Aug. 11, BTS has made sure to still keep in touch with their fans through social media. Jimin has done a few livestreams on VLIVE, V shared videos singing in the car on Twitter, and Jin and the rest of the boys continue to leave hilarious replies to fans on Weverse. Yeah, I know, there's a lot of places to keep up with BTS. Speaking of Weverse, BTS' Bring The Soul: Docu-Series will be available for fans exclusively on the app beginning on Aug. 27. Fans knew that the docu-series would probably be similar to BTS' Bring The Soul: The Movie (I mean, they have the same name), but with BTS' Bring The Soul: Docu-Series episode descriptions now available, fans know more about what they can expect.

Get your tissue boxes ready because based on the episode descriptions, the Bring The Soul: Docu-Series will probably be just as emotional as the movie, if not more. If you look on the series' official website, you'll see that a new episode of the series will drop every Tuesday beginning on Aug. 27 until Oct. 1. Each episode description begins with a quote shared between two members specifically that plays into the episode's theme.

The first episode, which airs on Aug. 27, is called "Challenge." The subheading reads, "SUGA to RM, 'The one thing I’m most afraid of is...'"

Here's the description for episode one:

It’s about time they are used to live performances, but the world tour always brings out the nervous sides of the BTS members.The members candidly speak about this year’s tour, their first-ever stadium concert in South Korea, and the docu-series.

The second episode, titled "Passion," will premiere on Sept. 3. The subheading reads, "RM to JIMIN, 'I want to love myself too.'"

Here's the description for episode two:

Jet lag and fatigue are taking their toll, and now the flu is dragging some of the members down. But this is no time to hit the floor. Waiting the members are the unrivaled magnitude of the venues and the audiences, together with the heated attention of the American media.

The third episode, titled "Relationship," will air on Sept. 10. The subheading for this episode reads, "JIMIN to JUNG KOOK, 'Apparently, I said I feel alone...'"

Here's the description for episode three:

Halfway through the North America tour, BTS find themselves entangled in a crisis of their own.It was each other that BTS members had through thick and thin for the last 6 years, and holding them together is their intimate and lasting ‘relationship.’

Episodes four, five, and six don't have full episode descriptions available yet, but there is a little bit of info on the website about them.

Episode four, titled "Influence," will premiere on Sept. 17 and its subheading reads, "JUNG KOOK to V, 'I want to know what my dream really is.'"

Finally, episode six is called "Energy" and it will premiere on Oct. 1. The subheading for episode six reads, "J-HOPE and JIN, 'If I don’t have them with me...'"

Judging from these episode descriptions and titles, the BTS ARMY can expect to go on one heck of an emotional ride once Bring The Soul: Docu-Series premieres on Weverse on Aug. 27. Wow, even when BTS is on vacation, they still manage to spoil their fans with loads of content. They are just too good to us!

More like this
Here's Why Harry & William Will Not Walk Together At Prince Philip's Funeral
By Brandy Robidoux
Chrissy Teigen's Tweet Announcing Her Return To Twitter Is A Clapback To The Haters
By Michele Mendez
Are BTS & Coldplay Collaborating On A Song? Here's Why Fans Think It's Happening
By Michele Mendez
Stay up to date