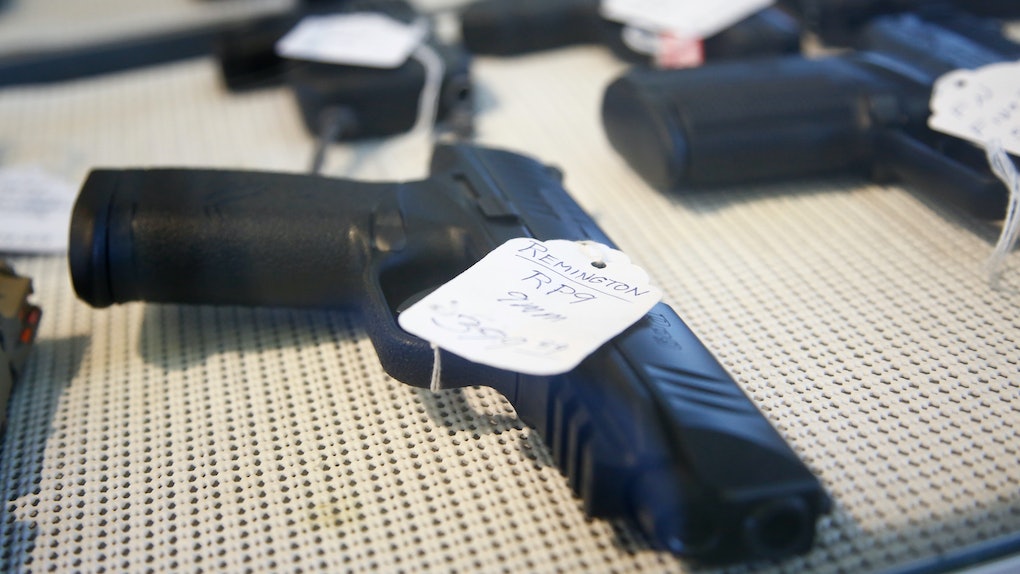 Spencer, per her Twitter bio and tweets, is a self-proclaimed supporter of President Donald Trump and a student at University of Tennessee at Chattanooga. Videos of her on YouTube suggest she is also an active animal rights activist.

In the post of her photo, Spencer is standing overlooking a bridge, wearing white jeans and a red shirt that says, "Women for Trump." She's pulled up the hem of her shirt to reveal a firearm tucked into the waistband of her jeans. Her caption: "I don't take normal college graduation photos." At the time of the photo, per user replies, she appeared to be on the grounds of the Hunter Museum in Chattanooga.

"Who knew someone could get so much hate for supporting their president and their second amendment right," she tells Elite Daily in a Twitter message after the college senior got some serious pushback for her post.

Asked why she was showing off her firearm in a photo, Spencer replied, "Because I'm proud of my second amendment right and I want to empower other women! Absolutely they are tools but I will always brag about being able to carry a gun to protect myself, my friends and my family!"

Spencer's comment about wanting to "empower other women" brought on its own deluge of backlash and debate about women's rights, the president, and what the role of firearms should be in women's self-protection.

"So I'm genuinely curious, since you're a woman for trump, do you agree with his actions?" asked a user named Morgan Parks. "Like sexually assaulting and harassing women? Or do you not care because he hasn't sexually harassed you personally? And do you think all men should be able to behave this way?" (The White House's official stance is that the women who have accused Trump of sexual misconduct are lying.)

"You want to 'empower other women' while you continue to support Trump?" another user asked.

"Oh please," wrote another user in response to the Trump argument. "Liberals believe in 'women's rights' unless it's about a women's right to protect herself."

"The best way to protect women would be to control the proliferation of guns," wrote another user. "The USA has a homicide rate for women over twice that of other developed countries. That 'right' to carry a gun is not working out well for women at all." (In fact: A report by the Centers for Disease Control found that in more than half of the homicides analyzed, a firearm was involved. In the U.S., per NPR, a higher percentage of homicides against women are committed by a male partner than the international average. Moreover, in domestic violence situations, a woman is five times more likely to be killed if a gun is present, per Everytown for Gun Safety.)

"You should learn where carrying in Chattanooga is legal, please," pointed out one user named Michael Dover, attaching a screenshot of a list of museums where firearms are prohibited. "It's illegal to carry at the Hunter Museum." Thus began a debate about whether her carrying a concealed weapon at the location of the photo went against state laws.

As other users pointed out, it's not clear whether she was actually on museum property or not and what the laws stipulate about concealed carry in that specific location. While the state allows for open carrying without a permit, concealed carrying requires a permit, and some places prohibit carrying altogether, such as public recreation areas.

Other users expressed concern about the safety of carrying a gun in that location, both for herself and for others. "Having worked in law enforcement for 24 years I've noticed that the people who felt the need to brag about a gun were the ones more likely to make poor decisions regarding that gun," wrote a user named Patricia Hernandez.

"When you take a concealed carry class the first thing they tell you is that having your gun in your pants like this is completely irresponsible," wrote a user named Chillmonger, quoting Spencer's tweet.

Spencer's post, and the conversation that ensued, was reminiscent of a similar post by Lahren in March that received backlash on social media. People gave Lahren a piece of their minds after she posted a similar photo of herself on Instagram, promoting a brand of athletic pants that reportedly are designed for just that. And incidentally, two women appear to have met, per a tweet.

Lahren certainly has endured her fair share of hate online, so at least Spencer is in good company.