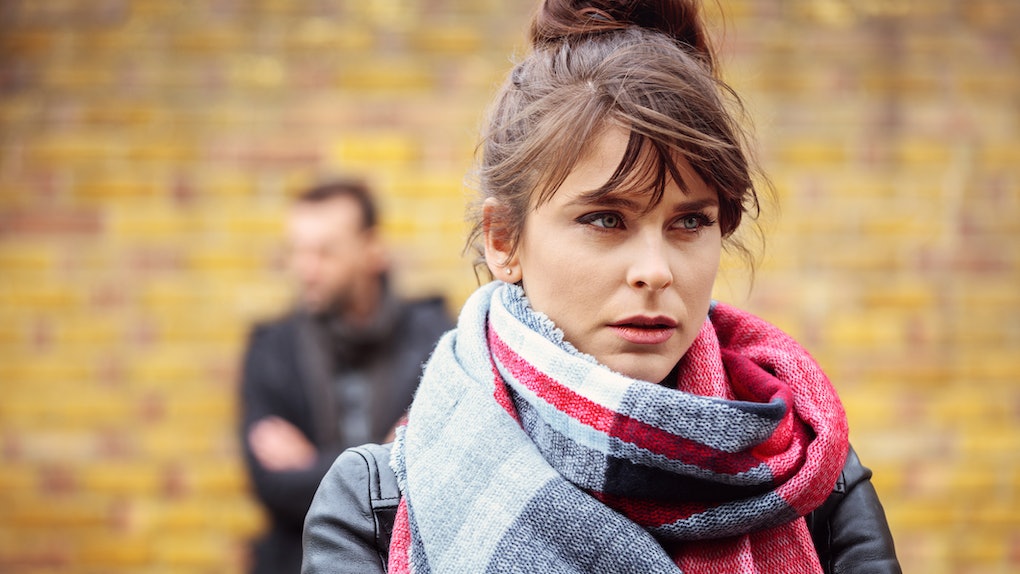 Thanksgiving season is upon us, which means that many folks who have moved away for college are heading back home to celebrate with friends and family. Returning home for the holiday break can also be a really stressful time, especially if you've decided that it’s time to break up with your high school partner and Thanksgiving break presents the best opportunity to do so. Ending a relationship with your high school sweetheart is rarely easy, and the added pressure of doing it so close to a holiday can make it even more fraught.

In some ways, however, Thanksgiving break is actually a better time split up than while you're away at school, since it gives you the opportunity to do it face to face, advises Cherlyn Chong, a dating and breakup recovery coach. "They deserve that much, and after all, have invested time, energy, and money into the relationship,” she tells Elite Daily. The holiday timing may seem a bit rough, but it's kinder to just get it over with as soon as you're sure of your decision, she adds. "You shouldn't drag on a relationship if you're pretty sure you don't want to be with your SO anymore.”

So, if the time has come to break things off with your high school SO, here is how the experts suggest doing so as peacefully and kindly as possible.

The first thing to consider when planning to break up with someone is the timing. This is especially true when you’re intending to break things off around an event like a holiday. While there is no timing that will make the breakup perfectly painless, some times are better than others. The one day that probably should be avoided, though, is Thanksgiving itself, says Chong. In that case, the question becomes whether to have the conversation before or after the holiday itself. “It will also depend on how your soon-to-be-ex feels about Thanksgiving,” Chong explains. “If it's something that means a lot to them, your actions can mar the joy of their favorite holiday… if that's the case, it will be better to hold off [until after].”

In most cases, however, it may be kinder to just do it as soon as possible, says Brenda Della Casa, a relationship coach and author of Cinderella Was A Liar. ”While no one deserves to be dumped at their family dinner, waiting things out can be unintentionally cruel, so if you are sure that you want to end a relationship, it's best to do it sooner rather than later,” she tells Elite Daily.

Prepare What You Want To Say.

Della Casa suggests spending some time prior to the breakup contemplating your feelings and thinking about what you want to say. It also doesn’t hurt to practice a little, she says. “One of the best ways to handle tough conversations is to write out what you want to say beforehand and go back to it a few times over the course of a few days. This will help you get a sense of what it is you want to convey, as well as help you practice getting the words out,” she suggests.

Avoid Placing Blame On Anyone.

If you’re not sure what to say, Chong suggests being honest, concise, and firm. “Do it in private and make sure that you leave plenty of time to answer any questions they might have. Be kind, and choose your words wisely,” she adds. “Say things like:

"I've been thinking about this for a long time now, and I think it's best that we go our separate ways."

"I hate to hurt you, but I don't think this is working out for us anymore."

The key here is to focus your feelings and avoid the blame game, explains Della Casa. ”Remember that breaking up doesn't have to be someone's ‘fault’ to be legitimized. Letting your partner know that you're not happy and would like to end the relationship because it is not working is different than rehashing every small infraction and frustration,” she says. “It's important to give space to the other party to share their feelings and being a compassionate listener is commendable but remember that it is OK to want to end a relationship that is not right for you so don't be guilted into staying.”

Once it’s all been said and done and the emotional dust has settled, Della Casa suggests giving yourself some time and space to heal. “Let them know you will be stepping away. Unfollow them on social media and resist the temptation to engage them in long text discussions after the fact,” she says. “Both of you will need time to grieve in your own ways and to find a new normal and that often requires space and time.” Ending a relationship with someone you care about is rarely easy, but sometimes it really is the kindest thing. By choosing to do it as peacefully and kindly as possible, you can eventually both be thankful for the time you spent together.

Brenda Della Casa, a relationship coach and author of Cinderella Was A Liar tells Elite Daily