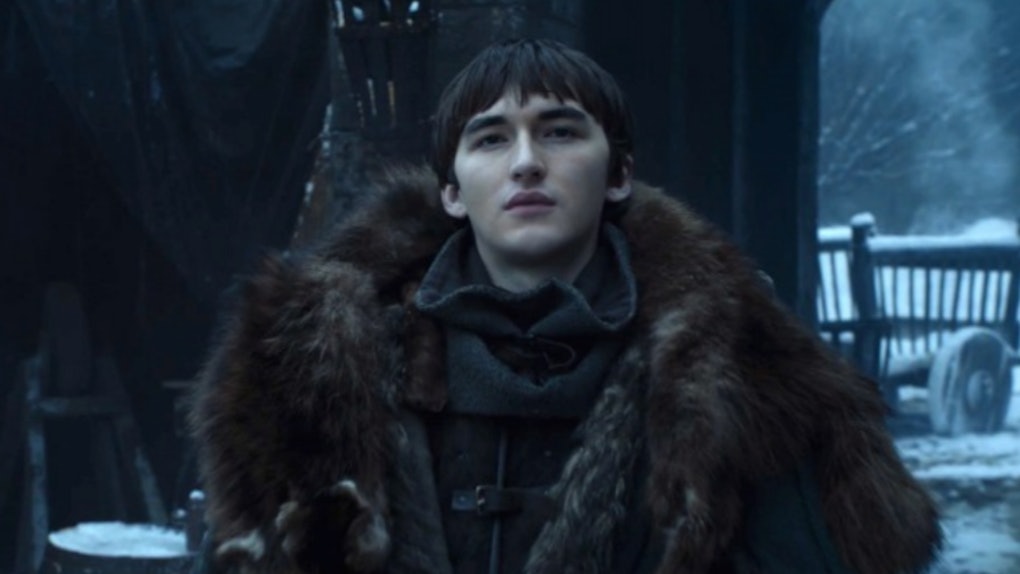 I don't know how it happened, but in a span of two episodes, Bran Stark has gone from my Public Enemy No. 1 Game Of Thrones character (Hodor didn't deserve what you did to him, Bran!) to one of my favorites. The youngest Stark brother (or whomever he is now since he won't stop correcting people who call him Bran) had one of the most epic moments of Season 8 Episode 1 when he reunited with Jaime Lannister, and now, Bran's "the things we do for love" line on Game Of Thrones just sealed his place on the Iron Throne of my heart. This is literally one of the best burns of the series.

Game of Thrones left fans with a massive cliffhanger, and unexpected reunion, at the end of the show's season premiere on April 14. After being absent for the entire episode while Dany, Jon, Tyrion, Viserys, and company got accustomed to Winterfell (dragons, giant army, and all), Jaime Lannister made his first appearance of the season in the episode's final shots. He sauntered into Winterfell on horseback, a hood covering his head. He hopped off his horse and got to take one breath of fresh air before he turned around to find Bran Stark (you know, the kid he tried to murder in the series premiere) waiting for him.

Then, boom. Screen goes black, credits roll, Episode 1 is over.

Naturally, this left fans reeling over what Bran was going to say to the man who put him in his wheelchair and changed the course of his life forever. Viewers didn't have to wait long into Episode 2 to find out what went down between Bran and Jaime after this moment. In fact, the epic burn we speak of happens in the episode's first scene.

When the episode starts, Jaime stands before a panel that consists of people who are not his biggest fans right now: Daenerys, Sansa, Jon. Expecting an army, a justifiably pissed off Daenerys says to Jaime, "I don't see an army. I see one man, with one hand." It becomes pretty clear that this panel is here to decide whether or not Jaime Lannister is going to live to see the upcoming white walker war.

Tyrion, trying to save his own a** just as much as his brother's, says, "My grace, I know my brother."

"Like you knew your sister," Dany shoots back. There's some back and forth about whether or not Jaime can be trusted. Jaime insists he's anti-Cersei and is on the side of the living. Tyrion says the same, and Dany questions his judgement, saying that it's possible Jaime is tricking them, knowing Tyrion would defend him whether he picked up on it or not. Jaime says he doesn't regret his past actions and that he would defend his family again, but he's on the right side now. And then, Bran pipes in with a burn that hurts worse than one from Drogon and Rhaegal.

"The things we do for love," he says, which is the exact thing Jaime says before pushing him out the window. The Season 1 references! The shade! I live.

Clearly, this is one of Bran's best lines ever. I'm living for Bran "We Don't Have Time For Small Talk But I Have Time For Shade" Stark this season. Give me more shady Bran!