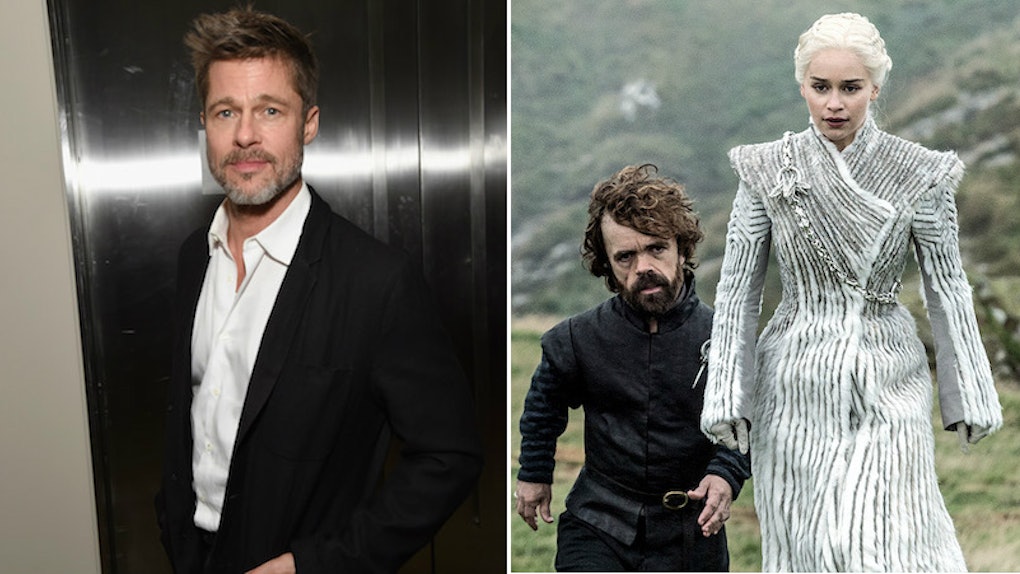 Game of Thrones is a show best enjoyed with company. Whether having a standing date with friends at someone's house, or hanging out on Twitter using a hashtag, the show is one of the few monocultural communal entertainment TV events in our 21st Century landscape. People know that who you watch with is important, which is why this past weekend, the Haiti Rising Gala had "Watch GoT with Emilia Clarke" as one of the bid items for their charity auction. Brad Pitt's bid to watch Game Of Thrones with Clarke was impressive. Clearly, he needs a show watching buddy now that he's getting divorced.

For those who are wondering why they didn't hear about an auction and the chance to watch Game of Thrones with the Mother of Dragons, that's because this was one of the high-profile auction items at the 7th Annual Sean Penn & Friends Haiti Rising Gala benefiting J/P Haitian Relief Organization. Held in conjunction with Golden Globes weekend, this event (with a star-studded guest list) is a chance for high-profile actors and producers to put their money where their mouths are when it comes to charitable giving.

From the accounts of those there to People Magazine, Pitt was at the auction, but he wasn't really paying all that much attention to the bidding items, jawing away on his phone at the back of the room, as one does when one wants to look like an important wheeler and dealer at a high profile event.

....once the auctioneer offered up the chance to watch GOT with the 31-year-old actress, the War Machine actor snapped to attention and began enthusiastically clapping. The auction — which began at $20,000 — got even more heated as Pitt announced that he would pay $80,000 for the prize.

Clarke was there too, hanging out with fellow castmate Kit Harington, and found the bidding war that broke out "hilarious." She'd been in L.A. all week, working all of the high-profile events in order to push her name forward for projects, now that Season 8 will finish filming in the summer.

Supposedly, the room, which was filled with A-listers, egged Pitt on to spend even more money, with Leonardo Dicaprio supposedly encouraging him, and the auctioneer begging others not to be afraid to bid against the man just because he's one of the most powerful people in Hollywood.

Apparently, they listened. The price shot up from the initial $20k opening bid, with Pitt going as high as $120,000 for the chance to hang out and watch 66 hours of television (and counting) with Clarke, and hear her war stories about making the series.

But regretfully for Pitt, the bidding didn't stop there. By the time the war was over, the winners (a high-rolling couple who have not been identified) paid $160,000 for the Mother of Dragons Experience.

Pitt might not have gotten his win, but it was all for a good cause, and according to The New York Daily News, the auction was extremely successful, raising $37 million for the people of Haiti and the continued rebirth of their capital city, Port-au-Prince.

Brad Pitt may not have won the bid, but he's got a lot on his plate anyway, with roles both in front of the camera and behind. His next major project is reportedly the sci-fi thriller Ad Astra, starring opposite Tommy Lee Jones. It's currently slated for a January 2019 release.

Emilia Clarke and Kit Harington now return to the U.K. to continue filming for the final season of Game of Thrones. HBO has confirmed that Season 8 will air sometime in 2019.

More like this
'House Of The Dragon': 'GOT' Spinoff Cast, Release Date, Filming News, & More
By Ani Bundel
Daniel Kaluuya's Mom's Reaction To His 2021 Oscars Acceptance Speech Is Everything
By Dylan Kickham
Royal "Experts" Said Meghan Markle's 'The Bench' Sends Coded Messages To The Firm
By Brandy Robidoux
Stay up to date